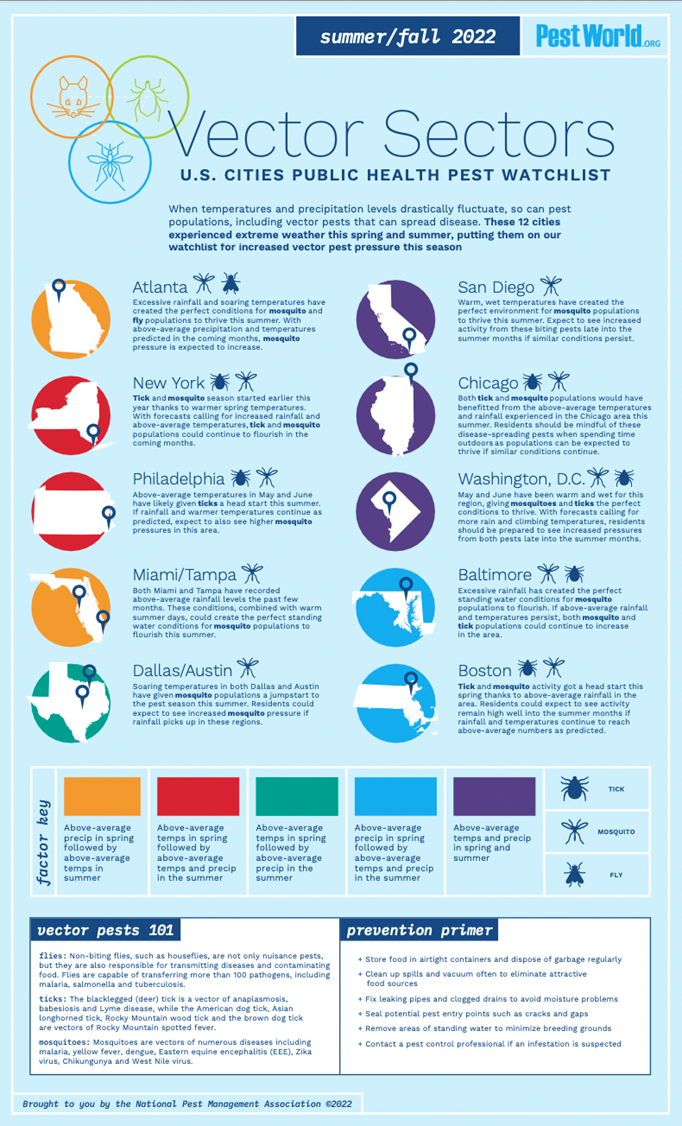 FAIRFAX, Va. – August 16, 2022 – The National Pest Management Association (NPMA) today released its bi-annual Vector Sectors™ list of the top 12 U.S. cities with the greatest risk for increased pest pressure from vector pests for the remainder of summer and into fall. With much of the country observing record-setting heat, excessive precipitation and, in some cases, significant drought, experts warn the public that increased encounters with mosquitoes, ticks and flies are likely to occur.

“Recent weather conditions have been far from normal and, unfortunately, these erratic temperatures and precipitation can have a direct impact on pest pressure from vector pests,” said Jim Fredericks, Ph.D., chief entomologist for the NPMA. “Dangerous insects like mosquitoes, ticks and flies are more than a nuisance – they’re known to spread serious diseases, posing significant threats to human health.”

Atlanta, GA: Excessive rainfall and soaring temperatures have created the perfect conditions for mosquito and fly populations to thrive this summer. With above-average precipitation and temperatures predicted in the coming months, mosquito pressure is expected to increase.

Baltimore, MD: Excessive rainfall has created the perfect standing water conditions for mosquito populations to flourish. If above-average rainfall and temperatures persist, both mosquito and tick populations could continue to increase in the area.

Boston, MA: Tick and mosquito activity got a head start this spring thanks to above-average rainfall in the area. Residents could expect to see activity remain high well into the summer months if rainfall and temperatures continue to reach above-average numbers as predicted.

Chicago, IL: Both tick and mosquito populations would have benefitted from the above-average temperatures and rainfall this summer. Residents should be mindful of these disease-spreading pests when spending time outdoors as populations can be expected to thrive if similar conditions continue.

Dallas and Austin, TX: Soaring temperatures in both Dallas and Austin have given mosquito populations a jumpstart to the pest season this summer. Residents could expect to see increased mosquito pressure if rainfall picks up in these regions.

Miami and Tampa, FL: Both Miami and Tampa have recorded above-average rainfall levels in recent months. These conditions, combined with warm summer days, could create the perfect standing water conditions for mosquito populations to flourish this summer.

New York, NY: Tick and mosquito season started earlier this year thanks to a warmer-than-usual spring. With forecasts calling for increased rainfall and above-average temperatures, tick and mosquito populations could continue to flourish in the coming months.

Philadelphia, PA: Above-average temperatures in May and June have likely given ticks a head start this summer. If rainfall and warmer temperatures continue as predicted, expect to also see higher mosquito pressures in this area.

San Diego, CA: Warm, wet temperatures have created the perfect environment for mosquito populations to thrive this summer. Expect to see increased activity from these biting pests late into the summer months if similar conditions persist.

Washington, D.C.: May and June have been warm and wet for this region, giving mosquitoes and ticks the perfect conditions to thrive. With forecasts calling for more rain and climbing temperatures, residents should be prepared to see increased pressures from both pests late into the summer months.

Common fly species, including houseflies, fruit flies and horseflies, can spread serious diseases such as salmonella and malaria. In fact, the CDC reports that one housefly can carry more than 1 million bacteria on its body. “While they typically have a short lifespan, flies can rapidly reproduce in large numbers,” said Fredericks. “You can keep these bothersome pests at bay by regularly disposing of trash and securing all exterior windows and doors with mesh screening.”

For more information on NPMA’s Vector Sectors list, or to learn more about protecting against pests, visit PestWorld.org.

The NPMA, a non-profit organization with more than 5,500 members, was established in 1933 to support the pest management industry's commitment to the protection of public health, food and property from the diseases and dangers of pests. For more information, visit PestWorld.org or follow @PestWorld on Facebook, Twitter, Pinterest, TikTok and YouTube.