Where Did Stink Bugs Come From?

If you reside in the Northeast or the Mid-Atlantic regions of the country, you are likely familiar with stink bugs, especially in the fall and spring months.  Although stink bugs don't present a health threat to people, the fact that they look to our homes as a winter vacation spot makes them a major nuisance this time of year. 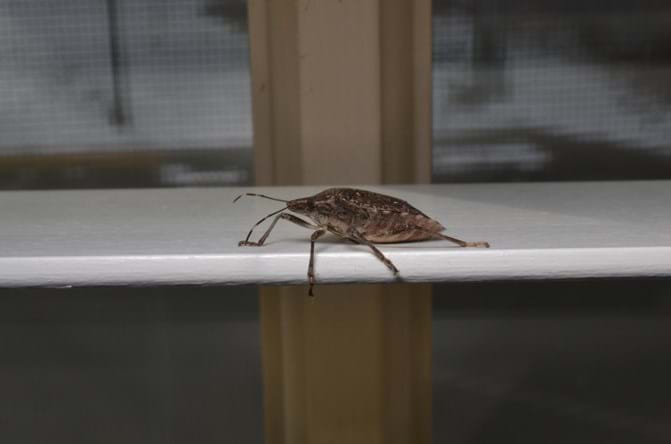 What Are Stink Bugs?

Adults are approximately three-quarters of an inch and brown, gray or dark green in color and are shaped like a shield. They have alternating light bands on the antennae and dark bands on the thin outer edge of the abdomen. The stink glands are located on the underside of the thorax, between the first and second pair of legs.

These pests typically produce a single generation per year, but warm spring and summer conditions could push them to produce two or three generations. During warm months, female stink bugs attach large masses of eggs to the underside of leaves and stems. After hatching, the wingless nymphs go through five immature stages before becoming full-sized, winged adults.

Adult stink bugs are most active from spring as they emerge from their overwintering spots to late fall, seeking shelter from the cold. In many cases, their shelter is also our shelter and homeowners begin to see these pests hanging on curtains, lampshades, screens and other objects inside homes.

Where Did Stink Bugs Come From?

Why Are Stink Bugs A Problem?

Although simply a nuisance pest for homeowners, stink bugs have become a serious problem for the agricultural industry in the United States due to the damage they cause to crops and plants.  Stink bugs typically attack apples, peaches, figs, mulberries, citrus fruits, corn, tomatoes, green peppers and persimmons as well as ornamental plants, weeds, soybeans and beans grown for food production. Because they use their piercing and sucking mouthparts to feed on plant juices, they end up damaging the crop permanently. This damage results in a characteristic distortion, referred to as "cat facing," that renders the fruit unmarketable. Some growers have lost their entire crop to these pests and the agricultural industry as a whole has incurred millions of dollars in losses. As an invasive species, the stink bug doesn't have any natural predators and scientists are feverishly working on finding ways to combat this destructive pest.

What Is That Smell?

The problem more familiar to homeowners who encounter this slow-moving, armored-looking pest - is the smell. When handled or disturbed, stink bugs are able to secrete a bad-smelling, bad-tasting fluid from pores on the sides of their bodies. This secretion protects stink bugs from predators .And, to them that's what we are - tissue-wielding, newspaper-swatting, foot stomping predators.

The reason stink bugs end up in our homes is because they are looking for a spot that will keep them safe from harsh winter elements such as rain and snow. Some you see, but many more will manage to hide in attics, basements or other parts of the house.

These stinky visitors will once again make an appearance in the spring as they seek a way outside to find a mate. Preventing them from coming into our homes is the best way to avoid the "ewww, stink bug!" shrieks that emanate from home after home in the spring and fall months.