What are European Hornets?

Found in 31 states, from the eastern seaboard west to the Eastern Dakotas and south through Iowa and Illinois to New Orleans

Seeing large worker European hornets is a sign of infestation. Nests in common areas such as hollow trees, attics, porches and inside wall voids are another sign of an infestation, and may indicate that European hornet removal is necessary. Nests that are not covered by an external structure have a brown papery envelope. Nests that are sheltered have little or no envelope covering their cells.

Looking to get rid of hornets? Change exterior lights to yellow bulbs to reduce this insect’s attraction to your home or property. Promptly remove any fallen fruit from trees, as it attracts these hornets. If you suspect a European hornet infestation or find a nest on your property, contact a licensed pest control professional. Do-it-yourself European hornet removal is not advised. A professional will conduct an evening inspection, since this is when European hornets are active.

European hornets and other stinging insects sting to subdue prey or protect and defend their colonies. Hornets can sting repeatedly during an attack. Because European hornets have smooth stingers, they may not always detach after a sting. If the stinger becomes lodged in the skin at the site of the sting, it is important to remove the stinger as quickly as possible to curb the release of venom from the stinger.

When a sting occurs, clean the affected area thoroughly with soap and cold water and apply a cold compress or ice pack. Over the counter nonsteroidal anti-inflammatory drugs (including Aspirin, Ibuprofen and Naproxen) may be used as needed to relieve pain. Antihistamines and hydrocortisone ointment can help soothe the local reaction. If the local reaction worsens, see a doctor for prescription oral steroids or antihistamines. If a more serious reaction occurs, seek emergency medical assistance or call 911. Those who have known allergies to European hornets or other stinging insects should acquire epinephrine kits, know how to use them, and carry them at all times.

Please note that DEET and other insect repellents are not effective in protecting against European hornet stings. To prevent stings, avoid swatting at hornets. Instead, blow gently from a safe distance. Avoid attracting hornets to certain areas by keeping both food and garbage in sealed containers. Rinse out empty food containers before throwing them away. 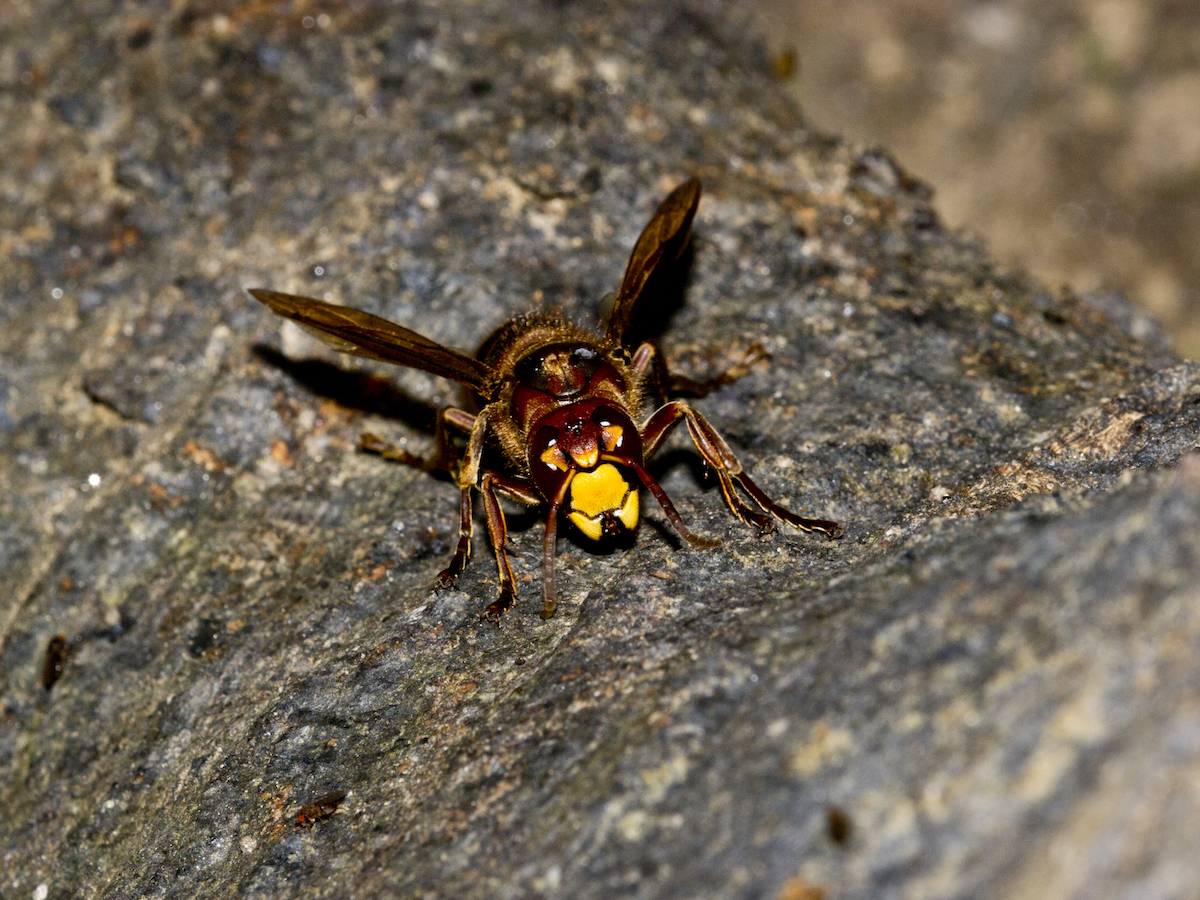 A European hornet nests in hollow trees, barns, out buildings, hollow walls of houses, attics and abandoned beehives. Unprotected nests are usually covered in a brown envelope made of cellulose from chewed up, decayed wood. European hornets are attracted to light and are known to repeatedly bang on lighted windows at night.

Fertilized European hornet queens spend the winter hibernating. In the spring, they use chewed upwood they have gathered to build a nest. The nest starts out with only a few cells in which the queen lays eggs. The queen feeds nectar and insects to the hatched eggs. When the hatched eggs mature, they become the workers. The workers are sterile females. Later in the summer, fertile females and males begin to hatch. Fertile, mated females will become the queens for the next spring. The workers and males die at the beginning of winter and do not overwinter for the following year.

European hornets nest in hollow trees, barns, out buildings, hollow walls of houses, attics, and abandoned beehives. Unprotected nests are usually covered in a brown envelope made of cellulose from decayed wood.

European hornets can do a great deal of damage to trees and shrubs because they strip the bark to get to the sap. They also use the bark fiber to build their nests.

European hornets have smooth stingers, so they can sting over and over again. Hornet stings also carry venom that makes the stings hurt, itch or swell for about 24 hours. A European hornet sting has the same risk of allergic reactions as with other insect stings. If you suspect you have these pests on your property, you should contact a European hornet extermination professional immediately.

Summer Safety: Bites, Stings and Everything in Between