What is a honey bee?

Honey bees get their common name from the honey they make using the nectar of flowers. They are social insects found all over the world and are extremely beneficial because of their role in pollination. In the U.S. alone, honey bees pollinate more than 100 crops. The two most commonly encountered kinds of honey bees in the United States are the common and rather docile European honey bee and the much more aggressive Africanized honey bee. Keep reading if you’d like to learn more, including information on honey bee management, treatment, and control.

Adult workers range in length from about 1/2 to 5/8 inches. Honey bees are usually orangish brown in color to sometimes black, and have an enlarged rear portion of the abdomen that is broadly banded with orange and brown, or brown and black. Their bodies are mostly covered with pale hairs, which are most dense on their thorax. Honey bees have 6 legs, as well as a visible barbed stinger. Queen honey bees are slightly larger, about 5/8 to 3/4 inches long, and have a pointed abdomen that extends well beyond the tips of their wings, with a smooth stinger present. Male honey bees, or drones, are about 5/8 inches long, and do not have a stinger. Africanized honey bees look just like domestic bees except for being slightly smaller. A specialist is required to identify specimens by genetics or measurements.

If you live in an area known to have Africanized honey bees or are within 100 miles of such an area, it is not advisable to approach a colony, hive, or swarm of honey bees without first putting on a complete bee suit. Schools and day-care facilities should conduct daily surveillance, have an action plan in place, and educate their students and faculty.

Anyone attacked should run quickly until they reach shelter such as a vehicle or building, and then begin to remove any stingers. If someone else is observed being attacked, advise them to run to shelter, but don’t go assist unless properly suited-up, as you will also be attacked. Be sure to call 911 for rescue help if necessary as well. For European honey bee swarmers in the yard, contact the cooperative extension service or call a local beekeeper or apiculture supply shop for beekeepers interested in removing swarms.

Managing honey bees and preventing them from foraging and nesting around the home is advised, especially if small children or allergic people are present. Discouragement consists of the removal or preventing access to any sugar, food, or water which may be attractive to bees, such as soda cans, flowers, water dishes, etc. It’s also recommended that flowering vegetation be located away from doorways, decks, sidewalks, mailboxes, and other areas frequented by people. Also, lawns should be kept free of white clover and flowering seeds.

If you have any further questions, a pest control professional can help with information on honey bee treatment and management.

First-aid should start with quickly removing the stinger. After stinger removal, do not rub the area because this causes the venom to spread, or scratch the area which may cause secondary infection. Clean it with soap and water followed by an antiseptic. A cold compress will reduce pain and swelling as well. n. If one has been stung more than 15 times, is feeling ill, or if the reaction is more severe than a small welt, consult a physician immediately because death can occur within 15-30 minutes from severe allergic reactions known as anaphylaxis. The USDA/ARS says that the average person can safely tolerate 10 stings per pound of body weight, which means that although 500 stings could potentially kill a child, the average adult can withstand more than 1,100 stings.

Africanized honey bees are much more aggressive than European honey bees and are extremely protective of their hive and brood (young). Their colonies are smaller and they use a much wider range of nesting sites. Nesting sites include mail boxes, overturned flower pots, old tires, mobile home skirts, and more. 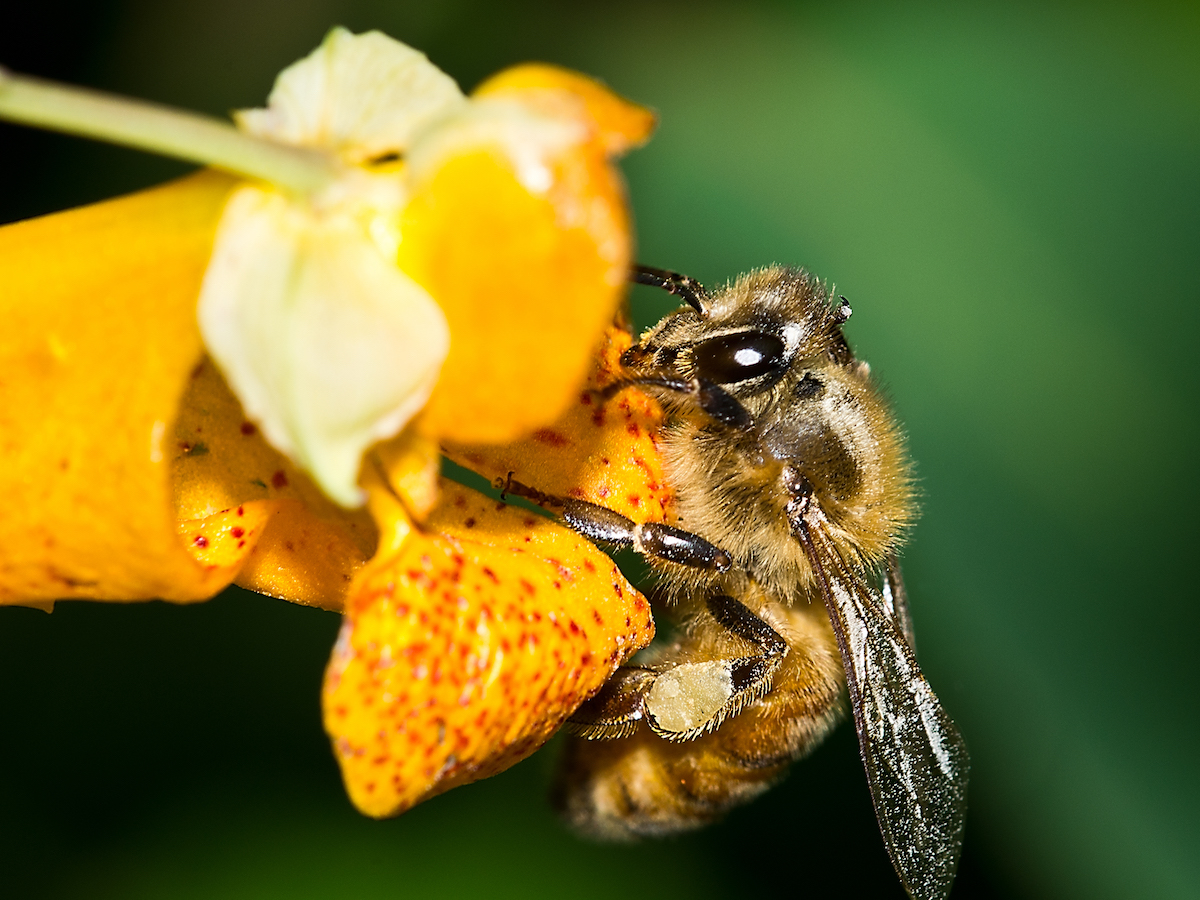 Honey bees are active pollinators and produce honey which feeds their young in colder months. They are the only social insect whose colony can survive for many years.

Honey bees swarm primarily when the colony size gets too large for the available hive space or the queen begins to wane or fail. New queens are produced and the old queen leaves with a large number of workers. The Common European honey bee colony usually swarms only once each 12 months. Africanized honey bees swarm as often as once every six weeks and can produce two swarms each time.

Honey bees are not aggressive, and do not search for something to attack. Instead, they are defensive and will attack when they feel that the colony is threatened.

Swarms first move to a temporary site such as a tree branch. The swarm will usually remain here for about 24-48 hours until permanent quarters are located, and then moves on. Permanent quarters may consist of a bee hive, hollow tree, hollow wall, attic, etc., typically some place which is sheltered from the weather.

Bees in a swarm are very docile and not likely to sting because they harbor no food stores or young and therefore, have nothing to defend. Likewise, honey bees encountered away from the hive are unlikely to sting unless severely provoked, such as by stepping on them. However, if the hive entrance is approached, the guard bees can become very aggressive, so do not approach hives without proper protection.

The European honey bee is found throughout most of the United States. The Africanized honey bee invaded the United States from Mexico in 1990, and by the beginning of 2007 was established in southern California, southern Nevada, Arizona, New Mexico, Texas, Oklahoma, western Louisiana, southern Arkansas, and central and southern Florida.

Honey bees are social insects and live as colonies in hives, with mature colonies of 20,000 to 80,000 individuals. A typical colony consists of infertile females known as workers, males known as drones, and a queen.

During the winter, the entire population lays dormant. There is only one egg-laying queen in the hive and she mates only once. She can lay as many as 1,500 to 2,000 eggs per day and may live as long as 5 years. The queen produces many pheromones, which regulate among other things the production of new queens and inhibit development of worker ovaries. The young workers care for the young or brood, build the comb, provide hive ventilation, and guard the hive entrance. Older workers serve as foragers to gather pollen, nectar, and propolis or bee glue. During the summer, workers live for only about 5 to 7 weeks, but those emerging in the autumn will over winter. Drones (males) appear periodically and have short lifespans, usually living for only a few weeks.

Worker bees have barbed stingers and when used, the stinger, poison sac, and associated tissue are torn from the bee body. If the stinger is not removed immediately, muscle contractions will drive the stinger deeper and deeper into the skin, creating greater time for toxin injection. In addition, the stinger gives off a pheromone which attracts other bees and induces an alarm and attack behavior. Therefore, immediate removal of the stinger is honey recommended. The Africanized honey bee will pursue the intruder or victim for up to a quarter of a mile, whereas the European honey bee will pursue for only about 30 feet.

The normal reaction to bee stings is local pain for a few minutes followed by swelling at the sting site, which subsides in a few hours. Itching and heat may last for a few hours. People allergic to insect stings will have a more severe reaction.