How to Treat Bee or Wasp Stings

The summer months, while the most enjoyable time of the year for many people, also bring the risk of painful insect stings from bees, wasps and yellowjackets as humans and insects spend more time together in the great outdoors. The most serious sting-related reactions come from insects that belong to the Apidae family (honey bees and bumble bees) or Vespidae family (yellowjackets, yellow hornets, white faced hornets, and paper wasps). 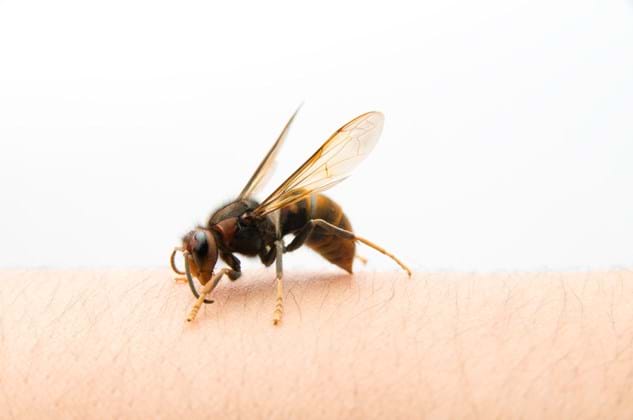 In general, these insects tend to sting people or animals when they feel threatened or perceive a threat to their nests or hives. Regardless of the circumstances, people who get stung will immediately feel a sharp, burning pain, rapidly followed by a red welt at the sting site, with a small, white spot at the center marking where the stinger punctured the skin. In most cases, the swelling and pain resolves within a few hours, however, as many as 10 percent of individuals develop a large local reaction experiencing exaggerated redness and swelling at the sting site that continues to gradually enlarge to around four-inches in diameter. After peaking around the second day, these reactions resolve over a period of five to 10 days.

In rare cases, approximately 3 percent of the public, individuals experience an extreme allergic reaction known as anaphylaxis. These reactions may be life threatening and require immediate medical treatment. Symptoms of anaphylaxis include generalized itching, rashes or hives, tightness or swelling in the throat, upset stomach, including pain, nausea and vomiting, as well as dizziness. In one percent of anaphylaxis cases, people may experience severe shortness of breath, a drop in blood pressure, loss of consciousness and shock. While there are other causes of anaphylaxis, stinging insects are the leading cause of anaphylaxis-related deaths in the United States. Each year, stinging insects send approximately half a million people to the emergency room.

How to Prevent Bee Stings

The best way to avoid the sting is to avoid attracting stinging insects in the first place.

While yellowjackets, hornets and wasps tend to sting repeatedly during an attack, bees are equipped with barbed stingers that typically become lodged in the skin and rip away, along with the venom sac, from the insect's body at the time of the sting. Therefore, if stung, it is important to remove the stinger as rapidly as possible by any means possible, because venom can continue to be released for several seconds. All stingers should be removed because if left in place they may cause a foreign body reaction or become infected. Symptoms of an infection include increased redness, swelling, and pain three to five days after the sting, or development of fever and chills.

If stung, it is important to immediately clean the area with soap and cold water and to use a cold compression such as ice or an ice pack. If the sting is on an extremity, it is helpful to elevate the limb. If needed, over the counter nonsteroidal anti-inflammatory drugs (NSAIDs) can help reduce pain, while an antihistamine and hydrocortisone ointment can help calm the local reaction. In case the local reaction worsens, healthcare providers may prescribe an oral steroid or antihistamine to help calm the swelling or itching.

People should seek out emergency medical assistance or call 911 if they experience symptoms of an allergic reaction, such as tongue and throat swelling, wheezing, dizziness, shortness of breath or drop in blood pressure. Anyone allergic to stinging insects or a parent of a child who is allergic, should learn how to use and equip themselves with an epinephrine kit and carry it with them at all times.