Interesting Facts About Mosquitoes, Wasps and Other Summer Pests

The classification of stinging and biting insects is a catchall grouping for solitary or social pests that sting or bite. Solitary species are those whose members live independently of each other, such as mosquitoes, carpenter bees, cicada killers, mud daubers and velvet ants. Social insects live together in colonies or nests consisting of workers, queens and periodically males. Common social species include bumble bees, hornets, paper wasps and yellowjackets. 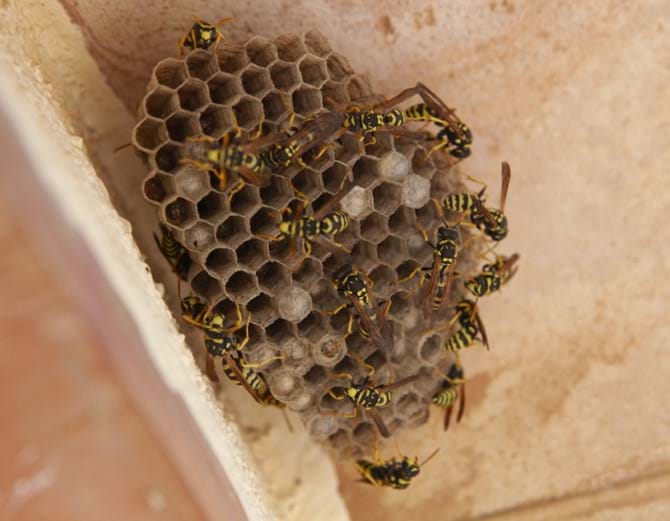 Stinging and biting insects are most active during the summer and fall, during which time they pose an increased threat to our health. In fact, stinging insects alone send more than half a million people to the emergency room every year. And, mosquitoes can transmit potentially fatal diseases like West Nile virus, dengue fever and malaria.

Learn more about the stinging and biting insects that are likely to frequent your backyard this summer with the following mosquito facts and facts about wasps and other summer pests.

Only female mosquitoes bite humans, as they need blood to reproduce. They find hosts by detecting body heat and chemical signals, such as the carbon dioxide we exhale. Studies have found that mosquitoes are generally attracted to dark colors, women, beer drinkers and smelly feet. Mosquito prevention is very important, as they can transmit diseases such as West Nile virus and eastern equine encephalitis (EEE).

Wasps feed on sweet liquids and are even known to get drunk off fermenting juice in the late summer. In the autumn, inseminated females will seek places to spend the winter, and may move inside the home, especially if there is a cathedral ceiling present.

European hornets live in colonies that may contain between 200-400 members. They tend to appear in late summer and, unlikemost other stinging insects, are active at night. European hornets are attracted to light and will repeatedly bang into lighted windows when it's dark outside.

Yellowjackets live in colonies with up to 4,000 workers, so it's not surprising that their nests can grow to very large sizes. In 2006, a farmer found a yellowjacket nest had engulfed in his 1955 Chevrolet, according to NPR.org.

Africanized bees, also known as killer bees, defend their colonies and attack when threatened. They have been known to chase people for more than a quarter of a mile once they get excited. If you are being chased by Africanized bees, run in a zigzag pattern and seek shelter in a house or car. Do not jump in water because the bees will just wait around for you to come up for air.

There are about 70 scorpion species in the United States. The Arizona Bark Scorpion, which is found in the American southwest and in Northern Mexico, is the most dangerous. Scorpions are nocturnal pests, so they hide during the day and are active at night. If food becomes scare, scorpion mothers have been known to eat their offspring when they are old enough to venture out on their own.

Fire ants get their common name from their ability to inflict painful bites and stings. Originally from Brazil, fire ants were introduced to the U.S. in 1933 and are now found throughout the southern part of the country. They are attracted to electrical junction boxes and have been known to infest them en masse, causing the equipment to malfunction. Red imported fire ants have a unique way of dealing with floods. A displaced colony will form a ball and act as a raft on flood rivers until it encounters dry land.

Want to learn more about the bugs of summer? Read some other interesting facts about summer pests, and discover answers to questions like, "Why do fireflies light up?" and "Which pest bleeds from its knees?"