Common questions and answers about this aggressive ant species

Ants are the most common household pest in the United States. Some species such as odorous ants and pavement ants are simply a nuisance to homeowners, but other species can pose health risks or cause damage to a home. One such species is the red imported fire ant. 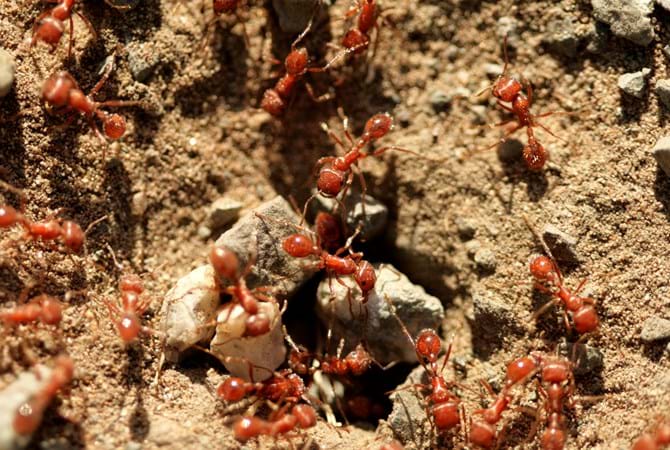 Fire ants get their name from their especially painful sting or bite. The red imported fire ant (RIFA) is an invasive species from Brazil and is known to be more aggressive than other species of ants. They are red-yellow in color with an extruded stinger — always at the ready for use. Some ant species need a specific food source to survive, but RIFAs will eat almost anything, plant or animal, that they can find.

RIFAs also have a unique way of surviving floods. The colony will connect to form a ball and float until it encounters dry land. When this occurs, RIFAs are an even greater threat because they do not have the safety of a nest and are very hungry. They may be more prone to attack and will sting with more venom than usual.

Where are fire ants found?

Since being introduced to the U.S. in the 1930s, RIFAs have spread throughout the South and West. They are regularly seen as far north as Virginia, as far south as Florida, and as far west as southern California. Small populations may be found in other states and are usually associated with nurseries that have imported plants from other states.

In places where fire ants are common, their nests are most likely to be found outside in the soil or near structural foundations. Most often, their nests are found under a covering object such as stones, grass, or the base of a tree. They are also attracted to electrical boxes and HVAC units, which can also be common entry points into the home.

For most people, the sting of the red imported fire ant causes a raised welt that can become a white pustule and is very painful. But rarely will someone be stung by a single ant. More likely, a person stung by a RIFA will receive multiple stings from multiple ants defending their nest. Ants use pheromones to communicate with each other, so when one is in distress, others will come to its aid — usually to the detriment of whomever disturbed the nest. For about 2% of the population, stings from a red ant can also cause anaphylactic shock.

How can I prevent a fire ant sting?

Red imported fire ant colonies can be very large and their stings are painful for people who encounter them either on purpose or by accident. The best way to treat for a fire ant problem is to prevent them from nesting in your garden or home in the first place.

RIFAs can gain entry to a home through the electrical and HVAC systems, as well as any cracks or crevices in the home’s structure. To prevent an ant infestation, be sure all internal and external cracks are sealed.

This species of ant also has a telltale mound nest structure. If you see an ant nest that looks like it could be fire ants, be sure to carefully avoid it. If you do encounter a nest and are stung by fire ants, seek medical attention promptly.

Controlling red imported fire ants can be very difficult and may only last for a short time as the ants tend to reinvade the next season. If you suspect you have a fire ant infestation or if you think you have a nest on your property, contact a licensed pest control professional right away. Do not attempt to move the nest on your own. The sooner the infestation is treated, the less risk there is of someone disturbing the nest and being stung.