With the arrival of autumn comes the annual invasion of brown marmorated stink bugs (BMSB) as they seek winter refuge inside homes and businesses. A native of Asia, BMSB first appeared in the United States in the middle 1990’s near Allentown, PA and are now found in 38 states ranging from coast to coast, border to border, with the epicenter in the middle Atlantic region. 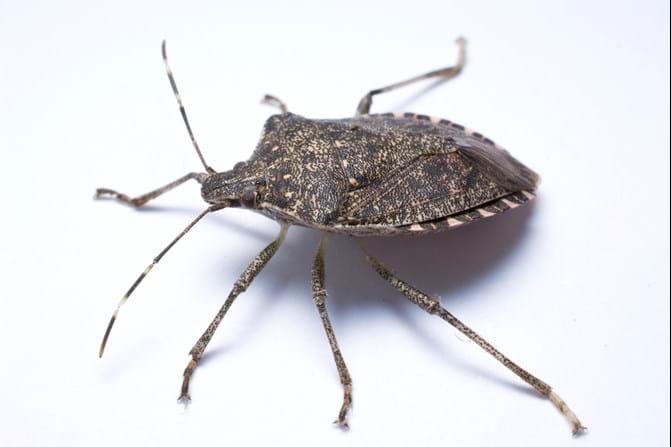 How has this pest spread so rapidly?

Due to its penchant for hiding in sheltered locations to pass the winter, this pest often invades recreational vehicles and campers. One vacationer reported driving hundreds of miles away from a home in Pennsylvania, opening the camper, and unwittingly releasing BMSB in a new location.

What kind of damage do stink bugs cause?

While noted as an occasional pest of crops in Asia, in 2009 we heard dire reports from growers in the middle Atlantic region who sustained significant losses to peaches, pears and apples to stink bugs. The next year was even worse, with regional losses to apples alone exceeding $37 million. This development was particularly disagreeable from a pest management standpoint.

Much to our dismay, it has become abundantly clear that BMSB are more than just a pest of fruits. Over the past few years damaging numbers of stink bugs have been seen in soybean fields across the region. This rascal has spread to more than 20 counties in Virginia, leaving a broad swath of damage to soybean along the way.  In 2010, we witnessed record numbers of stink bugs in fields of sweet corn. By plunging their sturdy beaks through the corn husk, they remove the nutritious contents of developing kernels. In some cases, so many kernels were damaged that the ear of corn failed to fill out.

Stink bugs are not just problems for conventional vegetable growers. With fewer options for insecticidal control, organic vegetable growers in the region have been overwhelmed where stink bugs are common. Community gardeners and homeowners have been vexed when hordes of stink bugs lined ripening tomatoes, poking holes in the skin and draining the juicy tissues below leaving speckled, puckered, and pockmarked fruit. Similar injury has been reported on peppers and many other vegetables.

Although populations of BMSB cropped up in new states in 2011, in general, stink bug populations were lower throughout our region and this trend continued through the spring and summer of 2012. The reasons for the decline have been attributed to weather, better management by growers and greater activity of natural enemies of stink bugs, but the exact cause or causes remain a mystery.

For many urbanites, stink bugs in apple orchards or corn fields probably seem like a remote problem. However, the nuisance potential of BMSB is almost without equal. In 2011, a homeowner in western Maryland captured more than 26,000 BMSB from January through June as they moved about his home seeking egress from their overwintering refuge. That’s a lot of nuisance!

Why do stink bugs enter homes and man-made structures in the first place?

Many folks incorrectly believe they enter to be warm for the winter. Bear in mind that millions of years ago when BMSB evolved, there were no mansions or man-made structures to invade. In chilly locations where winter halts the growth of deciduous trees and shrubs and withers herbaceous plants, food for the plant-eating stink bug all but disappears. 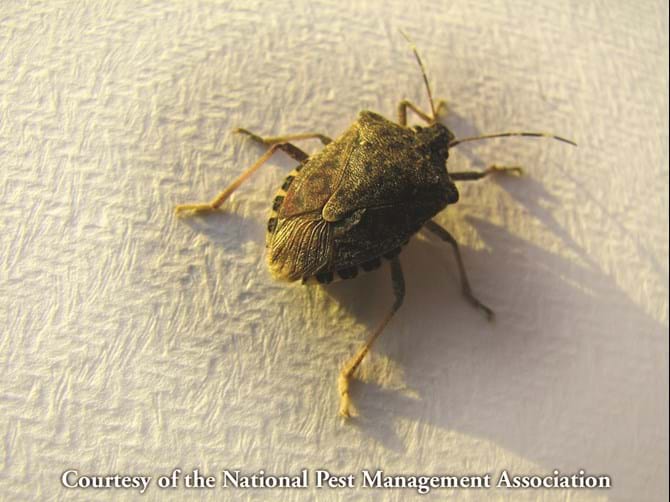 Cold brings movement and development of BMSB to a standstill. During this inimical season, BMSBs seek refuges to chill-out, protected from the harsh weather and dangerous predators. Until recently, these natural winter redoubts were thought to be rocky crags and piles of leaf litter. However, a new study revealed that the loose bark of large, freshly deceased but still standing trees may be a prime winter hideout for BMSB. However, for a BMSB leaving a senescing field of soybeans, the siding on a home might look like a mighty fine place to spend the winter.

Unlike the cooler, wetter summer of 2011, 2012 has been a year of record warmth and BMSB completed a full second generation in grand style. On a recent safari to a western Maryland, I collected almost a thousand BMSB in a couple hours of easy picking in soybeans and trees. Some scientists fear that we may be seeing a renaissance of stink bugs in the autumn of 2012 that could translate into a stink bug ridden 2013 similar to the watershed year of 2010. Only time holds the answer to this one. One thing is for certain, as BMSB continues to spread across our nation and as populations rise on regional and local levels, many more folks will learn the true implications of a bug that really stinks.

I thank Doo-Hyung Lee, Doug Inkley, Tracy Leskey, Galen Dively, and other members of the BMSB Working Group for providing information and inspiration for this article. To learn more about the biology, ecology, and current research on BMSB, please visit the following websites.

Watch this video to learn how to keep BMSB out and what to do when they get in.