You may have heard of stink bugs, but have you ever heard of the kissing bug? Be warned, they are not as sweet as they sound.

What is a Kissing Bug?

A kissing bug is a type of pest known technically as a type of reduviid bug. These bugs are important public health pests in some parts of the U.S., Central, and South America. Kissing bugs are known to bite and suck blood from their victims, usually on the face but sometimes other parts of the body. While doing this, they can transmit a disease called Chagas disease or “kissing bug disease.” Kissing bugs can be found in the southern Unites States, Mexico, Central America, and South America. 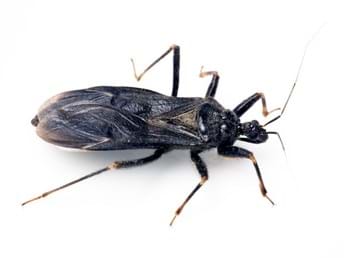 What is a Stink Bug?

There are many species of stink bugs, but the one that’s a pest in buildings is an invasive species introduced to the United States from Eastern Asia. Stink bugs release an unpleasant odor when disturbed or crushed. The odor is comprised of chemicals sometimes used as food additives and can linger for hours. Stink bugs have no natural predators and can spread quickly.

Unlike kissing bugs, stink bugs do not harm humans directly, and are not known to cause diseases, but threaten the agricultural industry as they destroy crops and gardens. They do not cause structural damage or spread diseases. 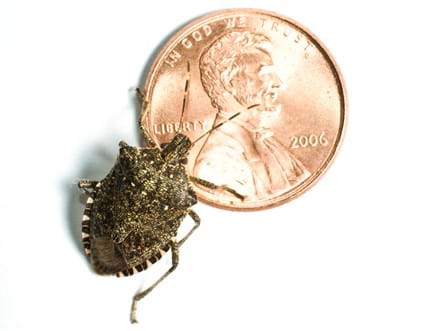 What’s the Difference Between Kissing Bugs and Stink Bugs?

You can prevent stink bugs and kissing bugs from getting inside your home in similar ways. Basic preventions include sealing any cracks around:

Both these pests tend to enter through cracks and crevices, so it is recommended to use a good quality silicone or silicone-latex caulk to keep them sealed out.

Do the Kissing Bug and Stink Bug Look the Same?

Kissing bugs can be identified by their oval and elongated shaped body. They are light brown to black in color with some species exhibiting red, yellow, or tan markings on the abdomen. They can be anywhere from ½” to 1” long with 6 legs and antennae.

Stink bugs have a shield-like shape and have 6 legs and a pair of antennae. Brown marmorated stink bugs (the kind that’s a pest inside structures) are typically a mottled grayish-brown and ¾" long. Adults have wings with dark bands on them, but nymphs do not have wings.

Kissing bugs typically hide during the day and feed on mammal hosts (including humans) at night. They are silent assailants because they inject an anesthetizing agent via their saliva while feeding. This means that most people do not know when a kissing bug is feeding on them while they sleep.

Stink bugs, remember, don’t pose a major threat to your health or safety. They often enter structures in the late summer or early fall when temperatures drop. They often reside in the sunny areas of homes to stay warm. Infestation can be identifiable outside by damage done to crops, or inside by finding large quantities of them.

What to Do if You Get a Kissing Bug Bite:

Kissing bugs carry the parasite Trypanosoma cruzi in their feces. When infected kissing bug feces comes in contact with the eyes, mouth, or open wound caused by scratching an itchy bite, it can cause Chagas disease, which has affected nearly 300,000 people in the United States. While it is considered rare to contract this deadly disease, it is important to look for symptoms. If you are experiencing things such as fatigue, fever, body aches, headaches, a rash, or swelling around the eyelids, you should seek out a doctor immediately.

How to Get Rid of Stink Bugs or Kissing Bugs

While stink bugs do not cause physical harm to humans, they can be annoying. Try to avoid crushing stink bugs as they will emit an odor. A great method for getting rid of stink bugs in your home is to sweep or vacuum them up. It’s also recommended to change your exterior lighting to yellow light bulbs because they are attracted to lights. In large quantities, it is best to contact a licensed stink bug control professional to have them removed and identify entry points.

When it comes to kissing bugs, it is best to remove nesting and eliminate other pests (such as rodents or wildlife) that the kissing bug would want to feed on. It is also important to keep firewood at least 20 feet from your home.

If you suspect an infestation of either stink bugs or kissing bugs, don’t hesitate to contact a pest control professional.