What are Brown Recluse Spiders?

Often identified by a dark brown violin shape on its back, the brown recluse spider is predominantly found in the Midwest and Southeast of the United States. This species is well known for its "secretive" behaviors, as it prefers to take residence in warm, dry and dark environments, such as woodpiles, basements and closets. This arachnid bites, usually unintentionally when it feels trapped, typically when a hand or foot reaches into a shoe or piece of clothing or a box in the attic or basement where a brown recluse has made its home. Because their bites can take three or more hours to develop and about three weeks to heal, it is important to keep an eye on the individual which was bitten. The brown recluse venom can cause severe allergic reactions, notably in children, the elderly or those with preexisting medical conditions.

The brown recluse or fiddleback/violin spider gets its common names from its coloration and reclusive habits, or the dark violin/fiddle-shaped marking on the top of its chest. Brown recluse spiders are found in southern Europe, temperate Africa, and in North, Central, and South America. In the United States, brown recluse spiders are found predominantly in the Midwest and Southeast. Of the 11 recognized species, six are of public health importance.

Light to dark brown, with characteristic dark brown violin marking on back

Adult brown recluse spiders are usually about 1/4 to 1/2 inches in length. Their color ranges from tan to dark brown, usually with a darker fiddle-shaped marking on dorsum or top of the cephalothorax. Brown recluse spiders have six eyes arranged in three groups of two each (diads) in a semicircle. Spiderlings (immatures) are very similar to adults except they are smaller and slightly paler.

Signs of a brown recluse spider infestation mainly include spotting one, or noticing webs in and around the home. If you have an infestation in your home, contact a licensed pest professional to inspect and treat the pest problem.

How to Get Rid of Brown Recluse Spiders

The most effective method of brown recluse spider control is to prevent them from entering the home in the first place. Homeowners should inspect the outside of your home for any small openings or holes, paying special attention to areas where utility pipes enter the home. Seal any such openings with a silicone caulk to prevent spiders and other insects from gaining access inside.

Stack firewood at least twenty feet from your home and five inches up off of the ground to deter spiders from hiding out in the wood. It’s a good idea to wear gloves when moving the wood, and inspect it carefully before bringing indoors.

Clothes and shoes should not be left on the floor, or they must be shaken out before wearing, especially if stored in the basement, garage, or other dark are. It’s good practice to store seldom-used items, such as boots, baseball mitts, skates, gardening clothes, and gloves, in tightly sealed plastic bags or boxes.

Control of severe brown recluse spider infestations should be left to a licensed pest control professional.

The bite of a brown recluse spider is usually not felt, but it may produce an immediate stinging sensation followed by intense pain or this reaction may be delayed for 6-8 hours. A small blister usually appears and the surrounding bite area becomes swollen. Symptoms include restlessness, fever and difficulty sleeping. The dead tissue gradually sloughs away during the next 10-14 days, leaving an open ulcer and possibly exposing the underlying muscles and/or bone. An antivenom has been developed but it is not clinically available. Call a physician or go to an emergency room immediately if bitten, and take the spider along for identification purposes. It should be noted that not all brown recluse bites result in ulcer formation, and that bites of other arthropods may cause similar reactions in people. 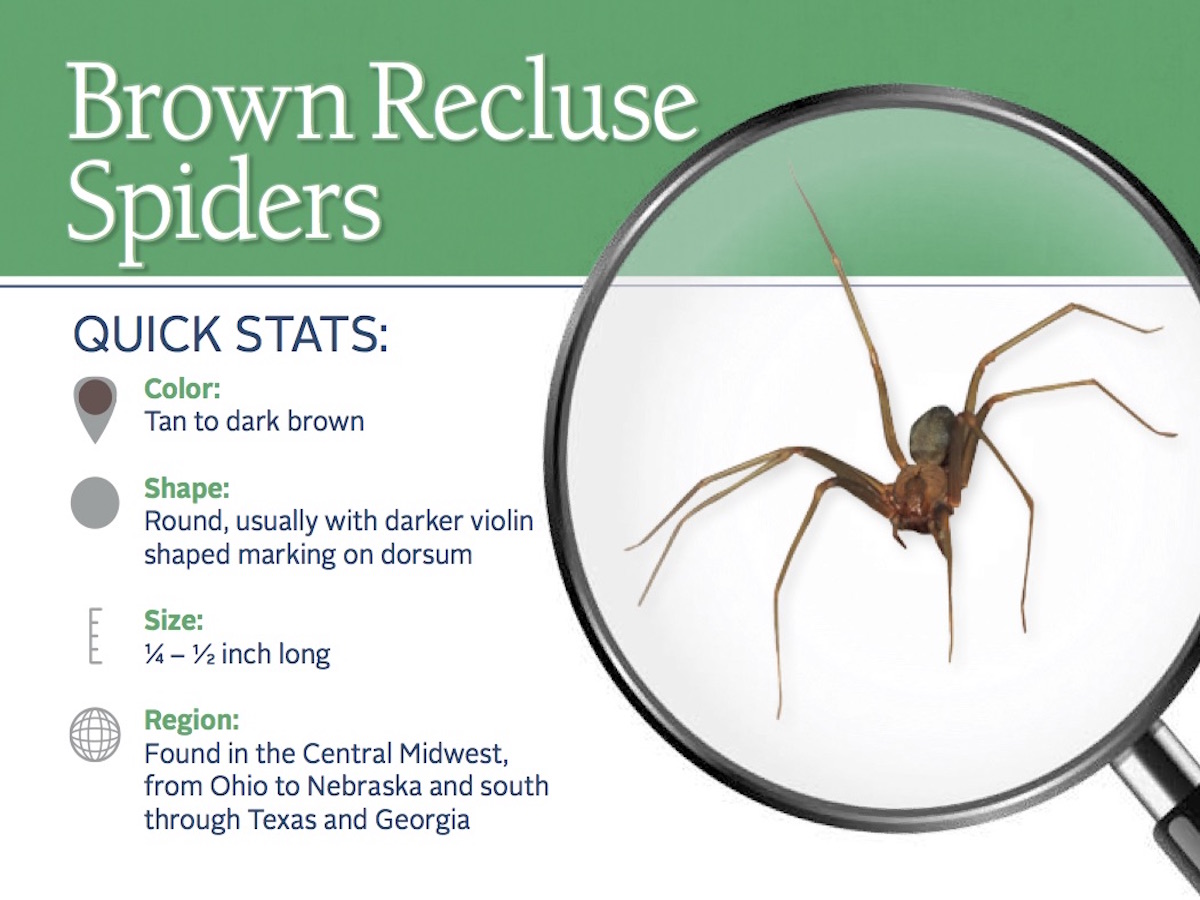 Female brown recluse spiders deposit 40-50 eggs in a silken egg sac, which is off-white, with the outer covering loosely woven. Each sac contains between 31-300 eggs. The eggs hatch in 25-39 days and the spiderlings undergo at least one molt within the sac before emerging. The development period (egg to adult) averages 336 days.

Indoors, male brown recluse spiders live an average of 543 days, and females live 628 days, but 4-5 years is not uncommon. The female spins an irregular web in undisturbed areas, like the garage, attic and basement. The web is not used to catch prey, but rather as a retreat.

Outside, brown recluse spiders are typically found around rocks, piles of inner tubes, utility boxes, woodpiles, under bark, etc. These spiders have been found in such places as cedar shake roofs.

With respect to food, brown recluse spiders prefer live small prey, such as cockroaches and crickets. If their prey is large, they would rather it to be dead, presumably to avoid damage to themselves. Their prey are primarily insects.

Brown recluse spiders often live outdoors where they are typically found around rocks, utility boxes and woodpiles. Indoors, brown recluses can be found in any undisturbed area, such as inside boxes, among papers, in seldom-used apparel and shoes, under furniture or in crevices of window moldings. Closets, attics, crawl spaces and basements are the most common brown recluse spider hiding spots.

Both male and female brown recluse spiders can bite and inject venom. Injection of their venom may produce necrosis or dead tissue, resulting in an ulcerating type of sore. Healing is very slow and usually takes several weeks, resulting in dense scar tissue. In severe cases, plastic surgery may be required.

Seeing More Spiders This Fall? Here’s What You Should Know

As colder temperatures arrive, homeowners may notice more spiders than usual. NPMA is offering advice on how to keep these creepy crawlers out of your home this fall.

Homeowners Concerned About Pest Activity As They Return To the Workplace

The National Pest Management Association shares results of a recent homeowner survey on bug, insect and rodent issues during the pandemic and unexpected concerns heading back to the workplace.