Identifying Your Spider Infestation: Venomous or Not?

Most of us grab for the nearest newspaper as a weapon or call the bravest person in our household at the first sight of a spider. Forget about identifying whether it’s dangerous or not – many homeowners simply ask, “how can I kill it?” 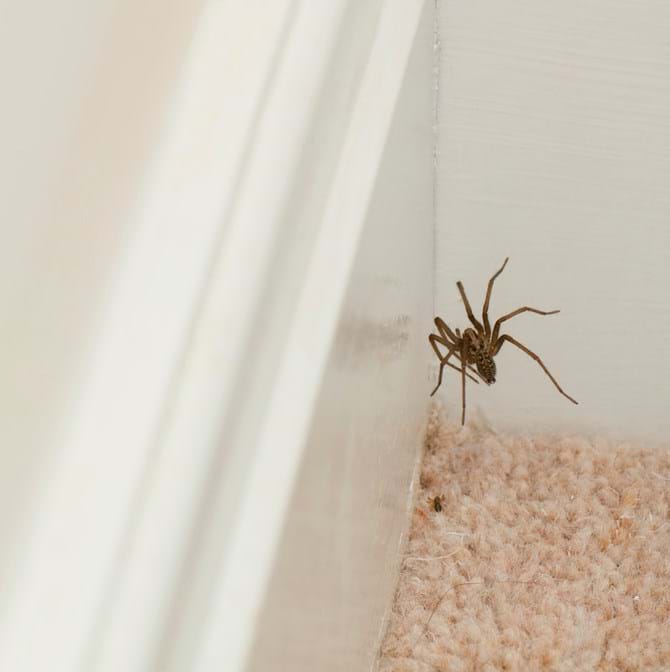 With about 3,000 spider species roaming around North America, a few are bound to end up in our homes more often than not. However only a few of those pose any actual health dangers to humans - namely the brown recluse spider, the black widow spider and the hobo spider.

Although most spiders are nuisance pests, it is important homeowners familiarize themselves with these more dangerous species so they can protect themselves and their families and also be prepared to act if should be faced with one of these spiders in their home.

Often identified by a dark brown violin shape on its back, the brown recluse spider is predominantly found in the Midwest and Southeast of the United States. This species is well known for its "secretive" behaviors, as it prefers to take residence in warm, dry and dark environments, such as woodpiles, basements and closets.

This arachnid bites, usually unintentionally when it feels trapped, typically when a hand or foot reaches into a shoe or piece of clothing or a box in the attic or basement where a brown recluse has made its home.  Because their bites can take three or more hours to develop and about three weeks to heal, it is important to keep an eye on the individual which was bitten.  The brown recluse venom can cause severe allergic reactions, notably in children, the elderly or those with preexisting medical conditions.

Perhaps no spider is more notorious than the black widow. From their ominous appearance to the purported, but untrue, claim that the females devour the males after mating, these spiders are quite feared.

Black widows are found throughout the United States, but are most common in the southern and western states. These spiders are often found around wood piles and gain entry into a structure when firewood is carried into a building. They are also found under eaves, in boxes, and other areas where they are undisturbed. They bite when they are threatened.

Like the brown recluse, the black widow has a distinct pattern allowing for easy identification – a black body with red “hourglass” coloration on the underside of its abdomen.  The black widow venom contains a neurotoxin, which causes immediate pain at the bite site and then spreads to other areas of the body such as the chest and the abdomen. They also leave two puncture marks on the skin. Young children and the elderly are especially susceptible to severe reactions to black widow bites.

The hobo spider is found throughout the Pacific Northwest and can be identified by its distinct pattern of yellow markings on its abdomen. These spiders build their webs in holes, cracks and recesses, and like most spiders, can be found in hiding places such as window wells and stacks of firewood, storage items, behind furniture and in closets.

As hobo spiders are much more likely to attack if provoked or threatened, people who live in areas where this spider is found should be aware of their habits to prevent and detect infestations before they become a problem.  Unlike the other spiders profiled here, the bite of a hobo spider may go unnoticed at first, but then a moderate to severe, slow-healing wound will develop.