What is an Orb Weaver Spider?

Orb weaver spiders, often referred to as orb weavers, are a type of arachnid named for the circular (orb) shape of the webs they create. The orb weaver spider family includes over 2,800 species spanning across the globe. North America alone is home to approximately 180 different orb weaver species, including the spiny orb weaver spider, gasteracantha cancriformis. (Photo: InsectImages.org)

Varies greatly, usually reddish-brown or grey but can be brightly colored

Varies greatly but typically have a large, round abdomen

Mature adults can range anywhere from 1.5-3 centimeters in body length

Everywhere except the Artic and Antarctica

Commonly seen in the United States, garden orb weaver spiders are typically between 1.5-3 centimeters in body length. Their fat, roughly triangular abdomens are usually reddish-brown or grey with a leaf-shaped pattern. Sometimes, garden orb weavers can even be spotted with a white or brown dorsal stripe.

While it is difficult to distinguish orb weaver spiders based on their appearance, a dead giveaway that one is nearby is their large, circular webs. Orb spiders spin complex, organized webs that can reach up to three feet in diameter using radial strands of silk that look like spokes on a wheel.

The clearest sign of an orb weaver spider infestation is their large webs. Observable to the naked eye, these webs will begin to pop up in large quantities during the summer and early fall months.

How to Get Rid of Orb Weaver Spiders

While there is no urgent need to get rid of orb weaver spiders, their large webs can certainly prove to be a nuisance. One important tip on how to get rid of orb weaver spiders and other insects that serve as prey is to seal any holes in the exterior of your home that will grant them entrance. For more information about spider control, check out our expert spider prevention tips.

Additionally, try to keep the area tidy and neat to reduce the number of areas for orb weaver spiders to hunker down and hide during the day. If more troubleshooting is needed, contact a licensed pest control professional for more tips on how to get rid of orb weaver spiders.

Orb weaver spiders rarely interact with humans, let alone bite them. Only if no other escape route is present will they resort to biting a human, and even then, the bite is rather mild.

An orb weaver spider bite usually results in mild local pain, numbness, and swelling the same as if you were stung by a bee. Long-term orb weaver spider bite symptoms are very uncommon unless the bite victim is severely allergic to the injected venom. If you think you’re experiencing symptoms of a spider bite, you should seek medical attention if symptoms continue to worsen for more than 24 hours. (Photo: InsectImages.org) 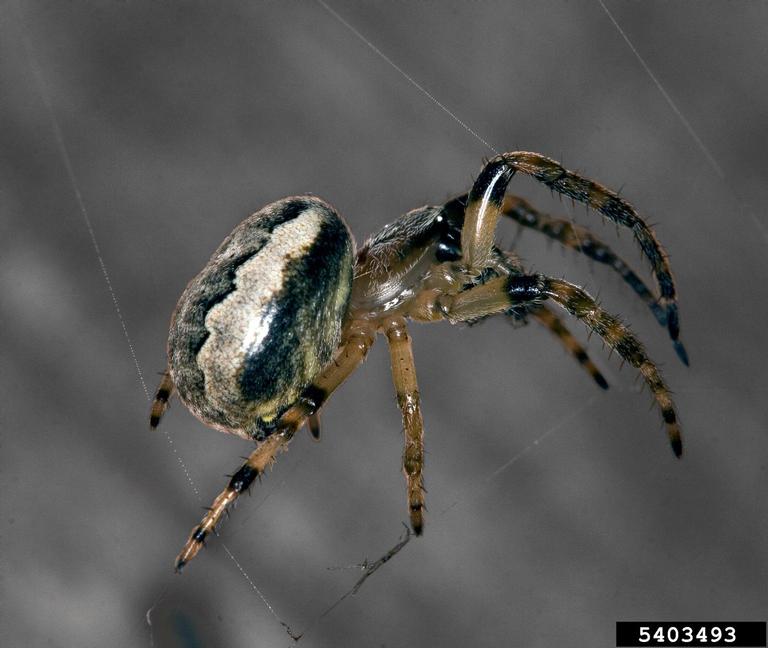 Orb weaver spiders pose no real threat to humans or pets and could even be deemed beneficial. With their large webs, they keep the insect population around them rather low, reducing the nuisance of pesky flies and gnats.

Many species of orb weaver spiders appear dangerous with their size and large webs, but they rarely interact with humans. The biggest inconvenience poised by orb weaver spiders are their webs, that are sometimes spun in areas frequented by humans, which can lead to an unfortunate encounter for someone with arachnophobia.

Orb weaver spiders leverage their massive webs to sustain their diet of small insects and invertebrates. In their natural habitat, these spiders can generally be found facing downwards in the center of their web waiting for an insect to fly into the silk.

With thousands of different species across many different ecosystems, the habitat of an orb weaver spider can be nearly anywhere: gardens, grasslands, cities, and more. However, they tend to stay in locations that will be frequented by their prey and have enough structures to support their webs. Areas that orb weaver spiders live in include:

Orb weaver spiders are also nocturnal. They spend most nights repairing their webs, or even eating a previously made web and making a new one. These spiders are not aggressive, nor are they hunters, so they spend most days waiting for prey on their webs or hiding in a nearby tree branch, leaf, or grassy area.

Most of the orb weaver spider’s 12-month lifespan is spent spinning their web.If they do venture off their silk, they stay attached with a trap line, which vibrates if something flies into it. This alerts the orb weaver to go back to either eat the prey or repair the web.

However, orb weaver spiders must be careful when approaching the web. Wasps, their main predator, often mimic the vibrations of a struggling insect to lure the spider back to the web. Once the wasp has locked on, it will paralyze the orb weaver spider before feeding it to younger wasps as live prey.

If you happen to spot an orb weaver spider, it is most likely a female, since males are always on the move. While females spend most of their lives spinning webs, males mostly wander in search of a mate and might not even spin a web at all. Once they have mated, the female orb weaver spider oftentimes eats the smaller male.

When the weather begins getting colder in the later months of fall, the female orb weaver spider lays her egg sacs in silky cocoons hidden away in foliage. Just one sac can contain upwards of several hundred eggs. In the warm temperatures of spring, the juvenile orb weaver spiders emerge and immediately begin spinning their own smaller orb webs.

Seeing More Spiders This Fall? Here’s What You Should Know

As colder temperatures arrive, homeowners may notice more spiders than usual. NPMA is offering advice on how to keep these creepy crawlers out of your home this fall.

Homeowners Concerned About Pest Activity As They Return To the Workplace

The National Pest Management Association shares results of a recent homeowner survey on bug, insect and rodent issues during the pandemic and unexpected concerns heading back to the workplace.