There's more to these common pest than you might think.

Ants are very common almost anywhere you live (see Ant Fact #7), but certain species of ants  are truly unique and can provide  insight on a range of topics from social behavior to traffic patterns. Check out some of our interesting ant facts below. 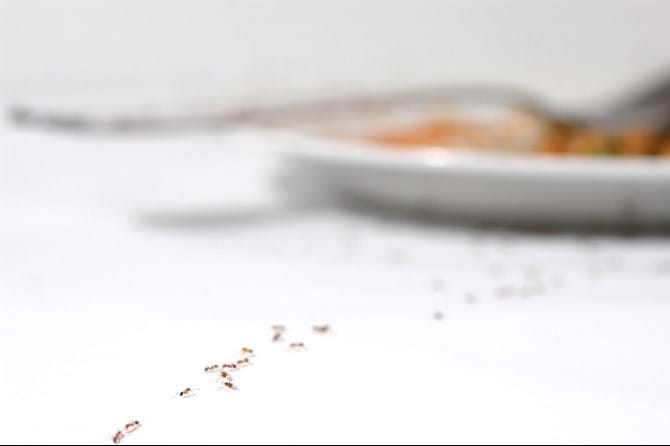 Fact #1: Colonies are bigger than the average ant farm.

Ant colonies come in literally all shapes and sizes. A few species live in colonies of only a few dozen ants; however, the average ant colony contains thousands of individual ants. Smaller colonies live in natural crevices or openings while larger colonies create vast nests and forage for supplies and food. There are also super colonies around the world that can contain more than 300 million individuals. These super colonies have been identified in Japan, Australia, the United States, and southern Europe.

Ants are very social insects, and they divide jobs among different types of ants in each colony. The queen or queens have only one job - to lay eggs. All other female ants are workers; they feed the larvae, take out the colony's trash, forage for food and supplies, or defend the nest. Male ants' only job is to mate with the queen.

Instead of hearing through auditory canals, ants "hear" by feeling vibrations in the ground. Special sensors on their feet and on their knees help ants interpret signals from their surroundings. They also use their antennae and the hairs on their body to feel around while foraging for food.

Researchers have yet to find a male of the species M. smithii. The queen ant reproduces asexually, so all offspring are clones of the queen. This species is found in several countries of Central America and most countries of South America.

Perhaps the strangest ant fact, there is a species of fungus that infects ants and takes control of their bodies. The fungus finds its way underneath the ant's exoskeleton and begins to consume soft tissue. Shortly after, by unknown mechanisms, it causes the ant to leave its colony. The ant then finds a leaf, bites it with a "death grip," and dies. A few days later, the fungus releases spores to infect more ants. Some ant species have learned to recognize infected colony mates and will carry them far away to protect the rest of the colony.

Because ants are so small, their muscles are thicker relative to their body mass than in larger animals. This allows ants to carry objects much heavier and bigger than them. To put it into perspective, if humans could lift 10 times their weight, a 200-pound man could lift a small car above his head.

Fact #7: Some ants are homeless.

Not all ant species build nests. A group of about 200 species known as army ants have two phases of their life: nomad and stationary. During the colony's nomad phase, the ants travel all day, attacking other colonies and insects they encounter for food. At night, they build a temporary nest and keep moving the next morning. The only time they stop traveling is during the stationary phase when the queen lays eggs and the colony waits for them to hatch. During this time, the worker ants make a nest out of their own bodies to protect the queen, the food, and the eggs.

Ants are found on every continent on Earth except Antarctica. A few islands such as Greenland do not have any native ant species, but individual ants have been brought in through human travel. The vast distribution of ants is rivaled only by that of humans. Very impressive for such little guys!

Despite how fascinating these ant facts may be, ant control and management around the home are important for health and safety reasons. If you suspect an ant infestation, visit our Find a Pro page to find a pest control professional in your area.