All About Kissing Bugs and Chagas Disease

Kissing bug. With such an innocuous name, it may seem as if this bug should be the official mascot of Valentine’s Day. However, the insect - named for its habit of biting humans on and around the lips - is a pest and is in no way a symbol of Cupid’s holiday. They are typically found in the southern United States, Mexico, Central America, and South America.

Kissing bugs are capable of carrying a parasite that causes Chagas disease, an illness that has afflicted millions of people in South America. The disease is one the Centers for Disease Control and Prevention (CDC) has identified for “public health action.” While cases have been extremely rare in the United States, a recent study published in the CDC’s Emerging Infectious Diseases journal found that nearly 40 percent of kissing bugs collected in California and Arizona had recently fed on human blood. Researchers said the findings were unexpected because the 11 species of kissing bugs found in the United States were not known to feed on people. 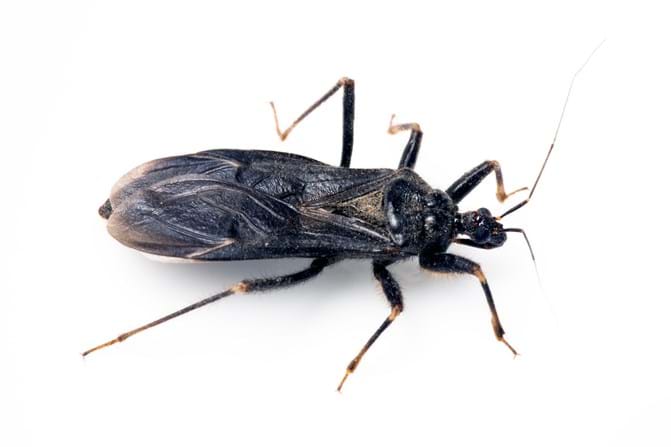 Kissing bugs, (Triatoma spp.) are true bugs in the family Reduviidae, are approximately 25mm/1 inch long.  While there are a variety of species, they are all generally brown or black with a red, yellow, or brown mark on their abdomen. They are related to the South Americanbarbeiro, or conenose. These bugs feed on blood at night, generally from small mammals and birds but as noted above, sometimes humans as well.  The nymphs require a blood meal to support their growth and maturation. It is worth noting, kissing bugs are not associated with bed bugs, a pest more prominent of late for feeding on human hosts.

The insect’s feces can contain the protozoa Trypanosoma cruzi which causes Chagas disease. Contact with infected feces, through an open wound, or through the eyes or mouth, can result in disease transmission. For most people who are bitten by a kissing bug, the contact is not a memorable one. In fact, most people who are bitten do not recall the bite and even fewer show any type of reaction.  Some, with particular skin sensitivities or allergic reactions to the bug’s saliva, will exhibit signs of itching, site swelling, etc.

Symptoms of Chagas disease include fever, fatigue, body aches, headache, a rash where the parasite entered the body and swelling around the eyelids. With treatment by a medical professional these symptoms usually fade, but cardiac issues, intestinal problems, and other more serious complications can sometimes develop.

The primary recommendation for preventing kissing bugs is exclusion – that is, remove entry points from your home:

There are many closely related bugs that look similar to kissing bugs. If you are concerned that you may have kissing bugs in or around your home, contact a trained and licensed pest professional who can inspect, and if necessary, treat the problem. According to the CDC, the likelihood of contracting Chagas disease in the United States is low, even if bitten by an infected bug. However, if you fear that you may have been bitten by a kissing bug and are concerned about disease exposure, consult a medical professional.