What is West Nile virus?

West Nile virus (WNV) is a potentially serious illness that is carried from infected birds to humans via mosquitoes. The virus first gained attention in the U.S. in 1999 after an outbreak in New York City caused 62 cases of encephalitis and seven deaths. Since that time, the virus has spread dramatically. WNV activity has now been detected in all 48 continental states, the District of Columbia, and Puerto Rico.

Nearly all human infections of WNV are due to mosquito bites, so, not surprisingly, in North America, human illness from WNV peaks in late summer and early fall. This seasonal variation is due to the fact that mosquitoes emerge in the spring in temperate climates and continue to feed until they die out in the fall when temperatures drop. However, sporadic cases of WNV occur throughout the year in southern states where mosquitoes survive year round. 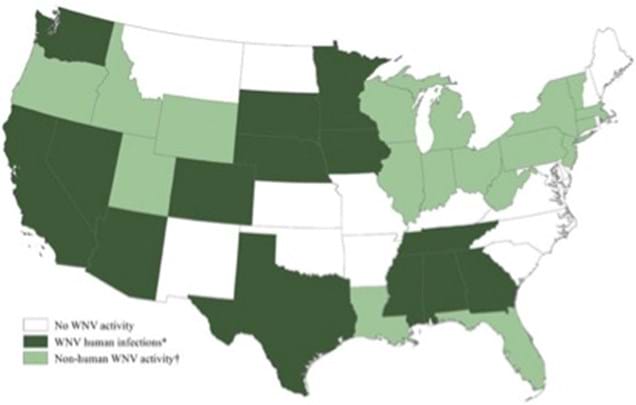 What are the symptoms of West Nile virus?

WNV infections can have variable courses, but fortunately in most cases the infection is mild and self-limited. In fact, in about 80 percent of cases, the infected person will display no symptoms and may not even know they have contracted the virus.

Up to 20 percent of people who become infected with WNV develop West Nile fever with symptoms including fever, headache, malaise, muscle aches, and loss of appetite persisting for three to six days. Approximately 20 to 50 percent of cases may experience the development of a skin rash on the chest, stomach and back. Patients overall may also experience swollen glands, eye pain, sore throat, nausea, vomiting, diarrhea, and abdominal pain. Despite the name "West Nile fever", some patients report very low grade or no fever at all. These symptoms can last for a few days or several weeks.

People typically develop symptoms of WNV between three and 14 days after being bitten by an infected mosquito and the symptoms may persist for several weeks, and in some cases cause permanent neurological effects.

What is the treatment for West Nile virus?

Milder cases usually resolve spontaneously and do not require medical attention, however, more severe cases, may require hospitalization for monitoring and support, although it is important to note that there is no specific treatment for WNV.

Anyone experiencing a high fever coupled with a severe headache or other signs of infection should seek immediate medical attention.

How can I prevent West Nile virus?

The best way to avoid contracting WNV is to prevent mosquitoes from biting. In the summer months, minimize outside activity between dusk and dawn, when mosquitoes are most active. If you must spend time outdoors during peak mosquito times, wear long pants and sleeves and use an insect repellant containing DEET, picaridin, IR3535, and some oil of lemon eucalyptus and para-menthane-diol.