What is an Asian Longhorned Tick?

The Asian longhorned tick is a newer species of tick found in the United States. Originating from East and Central Asia, this tick was first cited in America in 2017 and is known for its ability to reproduce without mating. So far, this tick species has been found in 16 states along the southwest and northeast regions: Arkansas, Connecticut, Delaware, Kentucky, Maryland, Missouri, New Jersey, New York, North Carolina, Ohio, Pennsylvania, Rhode Island, South Carolina, Tennessee, Virginia, and West Virginia. Read on to learn more about the Asian longhorned tick, including size, diseases transmitted by longhorned ticks, and how to find an exterminator near you.

Reddish-brown when unfed and grey when full of blood

Adults have 8 legs, Larvae have 6 legs

Longhorned ticks grow to the size of a pea when engorged, size of poppy seed when not

To keep yourself, your family and any pets safe from Asian longhorned ticks, as well as any tick species, there are a number of prevention methods to follow. Wear long-sleeved shirts and pants when going outside in wooded or grassy areas. Be sure to regularly check yourself and pets for any ticks before entering a home after spending extended time outdoors. Additionally, wear bug repellent with at least 20 percent DEET.

Make sure to also take preventative measures to keep ticks off of your property. Keep grass cut low to prevent ticks from hiding amongst greenery, and clear overgrown vegetation or brush to eliminate tick habitats. Build fencing around the yard to keep wild animals from carrying ticks onto your property. If you are concerned about Asian longhorned ticks on your property, contact a licensed pest control professional. 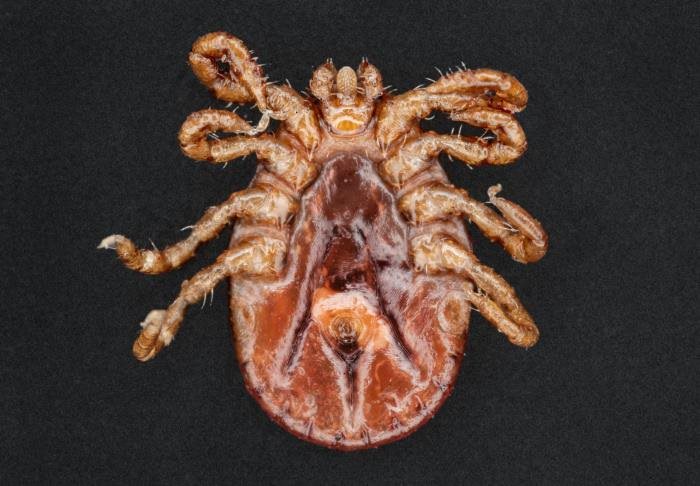 The female Asian longhorned tick has the unique ability to lay eggs and reproduce without mating. As a result, they can lay up to 2,000 new eggs after feeding without a male counterpart. This species is most commonly discovered attached to livestock and wildlife, but they can also latch on to pets and people.

The Asian longhorned tick is a vector of diseases such as bovine theileriosis and babesiosis. These can be transmitted to cattle and domesticated animals in other countries; however, these ticks have not yet been found to vector disease in the United States. This tick is a threat to warm-blooded animals because of its ability to reproduce so quickly. If too many Asian longhorned ticks attach to the same animal, there could be significant blood loss and eventual death for the host, which has been found to happen to cattle and sheep outside of the US. For cattle and goats who are bitten by this tick, the amount of milk produced can be greatly reduced. Research is still ongoing to determine the level of risk this species poses to humans but people should be more concerned about native tick species that do spread disease to humans. Currently, the main danger known of the Asian longhorned tick is to livestock.

NPMA released its bi-annual Vector Sectors™ list of the top 10 U.S. cities with the greatest risk for increased vector pest pressure for the remainder of winter and into spring.

With more Americans expected to hit local trails and parks amid the COVID-19 pandemic than years past, experts at the National Pest Management Association (NPMA) are cautioning trailblazers to keep alert for ticks.

Invasive Species Making Their Mark Across the United States

Invasive species are on the move across the U.S., causing property and agricultural damage, and even presenting new health threats to Americans. The National Pest Management Association (NPMA) identified the top five species spreading across the U.S. and what people can do to prevent or eliminate these pests.