A Guide to Mosquitoes and Mosquito Prevention

There are different types of mosquitoes found throughout the world, including all regions of the U.S. They are an annoyance to most because of the itchy mosquito bites they leave behind, but they can also pose a far more serious threat. In fact, mosquitoes are one of the deadliest animals in the world due to the diseases they can transmit. According to the World Health Organization (WHO), mosquito bites result in the deaths of more than 1 million people every year - the majority of these deaths are due to malaria. The CDC helped eliminate malaria as a major public health problem in the United States in the late 1940s. However, it reports that approximately 1,500 cases of malaria are documented each year in the United States due to imported cases, mainly from travelers. West Nile virus, dengue fever and Eastern equine encephalitis (EEE) are of greatest concern in the U.S. 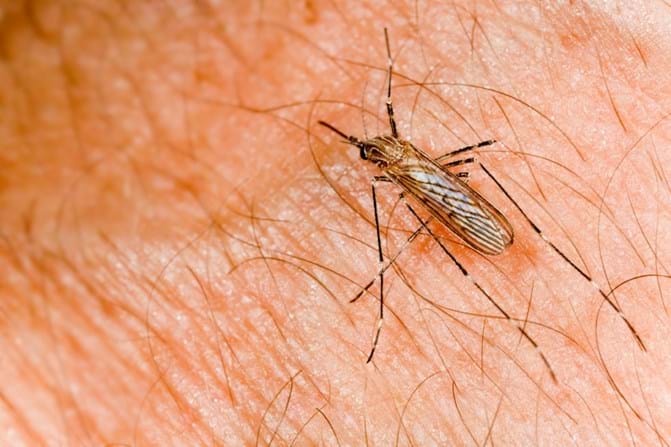 Mosquitoes are very small, about 1/8 - 3/8" long. They have six legs and long mouthparts called a proboscis. Their coloring varies from grey to black with some having white, green or blue markings. Individually, mosquitoes are very difficult to spot as they fly because of their small size and because they are most active from dawn to dusk.

Do mosquitoes only feed on blood?

Are mosquitoes more attracted to some people over others?

Yes. Studies have shows that certain factors have an effect on how attractive a person is to mosquitoes. Some of these, such as wearing dark colored clothing or perfume, can easily be avoided. Other factors like blood type, body temperature and the presence of naturally occurring bacteria on skin are unavoidable.

Where are mosquitoes found?

As mosquitoes lay eggs in water, they are common around marshes and lakes but can breed in as little as a ½ inch of standing water. This underscores the importance of homeowners regularly checking their property for containers that could be collecting water and providing a safe harbor for mosquitoes to grow.

Yes. Many people are bitten by mosquitoes with no side effects except the typical itchy welt. However, mosquitoes can be vectors for many diseases. If a mosquito feeds off a diseased host, some can transmit pathogens that can infect other hosts it subsequently bites.

In the U.S., mosquitoes are known to spread West Nile virus, Eastern equine encephalitis and dengue fever. Worldwide, they also spread yellow fever, malaria and chikungunya. These illnesses do not have specific treatments. People can have varied reactions to each virus and each has been fatal in some cases.

There is heightened concern in the U.S. about chikungunya as it recently appeared in Caribbean countries. Some Americans traveling to infected areas have been diagnosed with the virus upon arriving home. There have not been any locally-transmitted cases of chikungunya in the U.S., but health officials are keeping a close watch of this virus. The best way to avoid any mosquito-borne disease is to prevent mosquito bites.

How can I prevent mosquitoes?

Most counties have a mosquito abatement program in place to minimize the local population and help keep the public safe. These programs typically involve trapping mosquitoes in different areas and testing them for known pathogens. This helps monitor the spread of diseases and warn the public of risks in the area. County programs may also include plans for periodic spraying or fogging to eliminate adult mosquitoes.

Mosquito prevention at home starts with removing areas of standing water. Mosquitoes lay their eggs in water where the larvae develop, so it is important to empty containers such as empty tires and flowerpots, pool covers and baby pools after a rainstorm. Water in birdbaths should be regularly changed as well.

Most types of mosquitoes are active around dusk and dawn, so avoiding the outdoors at those times will reduce the likelihood of getting a bite. If you're outside, wear long sleeves, long pants and insect repellent to protect skin from mosquitoes. A small fan at outdoor gatherings may also reduce mosquitoes, as they are not strong flyers.

It is especially important to wear effective insect repellents and protective clothing if traveling outside the U.S. Mosquito-borne diseases that may be rare in the U.S. are common in many foreign countries.

If you have a mosquito problem on your property, contact a licensed pest professional to evaluate the situation and advise you on how to get rid of mosquitoes.