Invasion of the Tawny Crazy Ant

By now you have probably heard of a new invasive ant species that is terrorizing the Gulf Coast states.  There are tales of these ants shorting out electrical equipment, invading people’s homes in extraordinary numbers, and displacing the infamous Red Imported Fire Ant (Solenopsis invicta) with ease. This pest is the tawny crazy ant, Nylanderia fulva (also known as the Caribbean crazy ant, hairy crazy ant, and Rasberry crazy ant). It is difficult to explain to those that have not witnessed an infestation firsthand just how dense the populations of crazy ants can be. Under every stone, foraging up every tree, and crawling over every blade of grass, the tawny crazy ant is ubiquitous throughout the landscape in neighborhoods from Florida to Texas. It is not an exaggeration to describe their populations as biblical plague-like proportions.

Tawny crazy ants are less than 2mm long, brown, and hairy when viewed under magnification. Perhaps the best way to identify them in the field is by their enormous populations. The tawny crazy ant was first discovered in a Miami hospital in 1990 and was reported by John Klotz. Since then, they have been moved, largely by human commerce, to 20 Florida counties, 24 Texas counties, and several counties in Louisiana and Mississippi. For 22 years they were thought to be Nylanderia pubens, a Caribbean species that was first found in Florida in the 1953, according to James Trager. In 2002, the tawny crazy ants were first spotted in Pasadena, Texas by a pest management professional (PMP), Tom Rasberry. In 2008, Jason Meyers suggested that they were not the Caribbean crazy ant and gave them the tentative name of Nylanderia pubens. It wasn’t until 2012 that their identity was finally discovered to be Nylanderia fulva(the tawny crazy ant) by a team of researchers lead by Dietrich Gotzek. 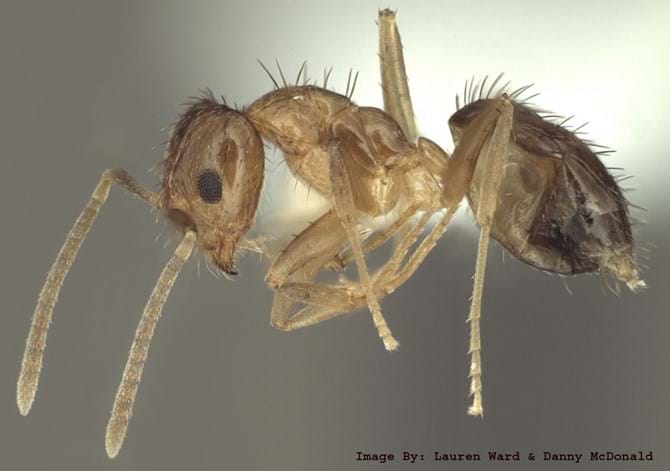 Research regarding the management and ecology of the tawny crazy ant is moving scientists closer to management strategies for this incredible nuisance species. Unfortunately, most efforts result in only one month’s worth of relief before the ants make a triumphant return. Their colonies are hard to find due to the fact that they nest under objects instead of constructing mounds of soil. They have an extraordinary number of queens that are highly fecund. It is not unlikely to find 20 queens under every dinner-plate-sized stone. Furthermore, tawny crazy ants are not attracted to traditional fire ant baits that use a corn grit carrier and oil as their attractant.

The best advice for managing this invasive species is to hire a qualified pest professional. It is essential to start a management program early in the year before population densities explode (typically before May 1st). Any unnecessary objects sitting on the ground, such as rocks, logs and debris should be removed from the area. However, infested articles should not be moved to other locations without insuring that crazy ants have been removed. Tawny crazy ants thrive in high moisture areas, therefore, leaky faucets should be fixed and irrigation should be minimized. Structures should be protected with a professionally applied product, covering all trails and nesting sites. If the entire population is not treated, it is likely that the tawny crazy ant will return within a month. A professional will also have the knowledge of which ant baits to utilize in conjunction with contact treatments. 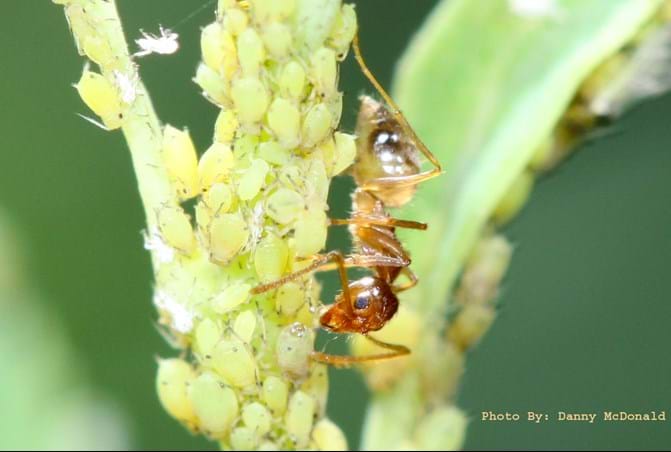 Those living in crazy ant territory should come to the realization that their tolerance level for ants must be increased. It is a fact that 95% population management of tawny crazy ants still leaves an unfortunately large number of ants. Take solace in the following facts:

At Sam Houston State University we are dedicated to solving the mysteries of tawny crazy ant ecology and discovering new management strategies. If you suspect that you have tawny crazy ants, please send them to Danny McDonald for verification at: 2424 Sam Houston Ave. Suite B8, Huntsville, TX 77341. For more information please visit the Texas Invasive Species Institute.

Dr. McDonald is a research scientist at Sam Houston State University. He received his Ph.D. in entomology from Texas A&M in 2012 where he studied various aspects of the tawny crazy ant’s biology, behavior, and management. Dr. McDonald continues to research the tawny crazy ant and runs the Invertebrate Toxicology Laboratory at the Texas Research Institute for Environmental Studies in Huntsville, Texas.