Everything you need to know about this invasive species

Brown marmorated stink bugs (BMSBs) are an invasive species from Asia that first arrived in Pennsylvania in 1996 and can now be found in much of the continental United States. Stink bugs earned their name from the defensive odor they release when disturbed or crushed. People most commonly encounter stink bugs in their homes during late summer and autumn as the temperatures outside begin to fall. 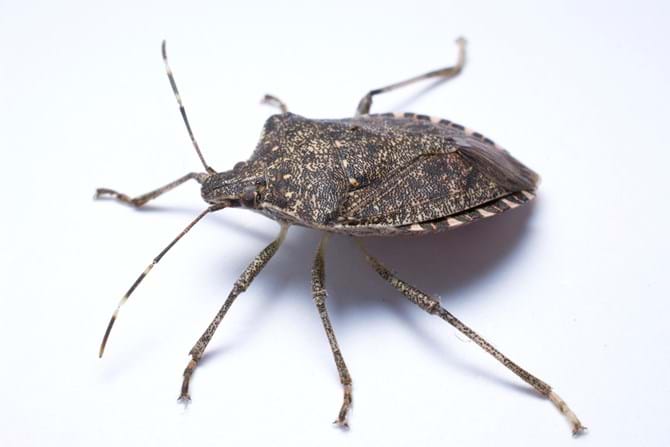 Adult BMSBs are mottled greyish-brown in color and have six legs. Their body shape is a triangular shield and they are about ¾ of an inch long.

Where do stink bugs come from?

Stink bugs are a native of Asia and were accidentally introduced to the United States sometime in the late 1990s. Because there are no natural predators for stink bugs in the U.S., they have been able to spread rapidly to become a significant agricultural pest.

Why do they come indoors?

As the weather gets colder toward the end of summer and early fall, stink bugs begin searching for warm overwintering sites. This leads them to enter homes and other structures that could provide shelter. Stink bugs reemerge from their overwintering sites in early spring to become active once again. During warm months, they are frequently seen congregating en masse on the sides of buildings.

Stink bugs aren't known to bite humans or damage property, but caution should be used when handling them to avoid a release of their unpleasant odor. Their tendency to invade homes in high numbers can be quite a nuisance. Though they don't pose a direct danger to people, stink bugs destroy crops and are a threat to the agricultural industry.

How do I prevent a stink bug infestation?

To prevent stink bugs from entering homes and buildings, seal all cracks around windows, doors, siding, utility pipes, outlets, behind chimneys and underneath the wood fascia and other openings. Be sure to use a high-quality silicone or silicone-latex caulk. Damaged screens on doors should be replaced to keep stink bugs out. It can also be beneficial to replace outdoor lighting with yellow bulbs, which are less attractive to stink bugs. A licensed pest professional can treat for stink bugs in the late summer or fall to prevent infestations as they seek shelter from the cold.

For more information on stink bug prevention, read our article on 10 Tips to Keep This Smelly Pest at Bay.

How do I get rid of stink bugs?

If you're already dealing with stink bugs in your home or building, use a vacuum cleaner to remove them. Be sure to discard the bag or empty the canister to prevent odor from spreading. For further assistance, contact a licensed pest control professional to assess the problem. Enter your zip code here to locate a pest control company near you.