What is a Bat?

Bats are nocturnal, flying animals that are known for inhabiting dark and secluded locations. Since the discovery of the first bat fossil dating back 53 million years ago, scientists have identified over 980 species of bats worldwide, 40 of them living in the United States. Depending on the species, bats can live for up to 30 years. You can read more bat facts below, including how to identify them, and how to get rid of bats.

Varies in shade from tan to black

All, with the exception of colder regions beyond the limit of tree growth

A bat’s body is covered completely with hair and they tend to have rather large ears. Bats use their ears to help them detect the location of objects around them or to locate insects flying through the air. Depending on the species, an adult bat can weigh less than 1 oz. up to 3 lbs. Bats have two wings, consisting of a double membrane stretched across their elongated fingers and arm bones, which are their primary way of getting around. They have four limbs, two legs and two arms with the same bones as human hands modified as part of their wings.

Another interesting bat fact is they are the only mammal capable of true flight. The surface of a bat’s wing is equipped with bumps called “Merkel cells”. These bumps have tiny hairs that help sense airflow during flight so the bat can make adjustments for maximum flight efficiency.

Bat-proofing a structure is the best way to prevent an infestation and the best time to bat-proof is after bats have left for their hibernation periods in the autumn. Attempting to bat-proof at any other time raises the possibility of boxing in babies who will then look for other parts of the house to escape to. At dusk, homeowners should inspect the exterior of the home and observe where bats enter and exit. Common access points include attic louvers and under facia boards. It is recommended that homeowners seal any cracks or crevices with caulk and steel wool. Pay special attention to holes in the structure that lead to dark secluded areas, like attics and belfries. Also, screen attic vents and openings to chimneys, and install door sweeps. Exclusion is the only method to keep bats out long term.

How to Get Ride of Bats

Homeowners should contact a licensed pest professional if an active bat infestation is suspected, as the problem often cannot be controlled with do-it-yourself measures. Many states also have laws protecting bat species and removal may require a special license or approval.

Bats, in fact, will bite if they feel threatened or if they are handled improperly. A common misconception is that bats will attack humans for no reason, a myth that has been proven inaccurate. Most bat species feed on insects like moths and beetles. If you or someone you know has been bitten by a bat, it is important to seek medical care immediately to test for rabies transmission. Be sure to wash the bite and any other locations that have come in contact with the bat’s saliva. 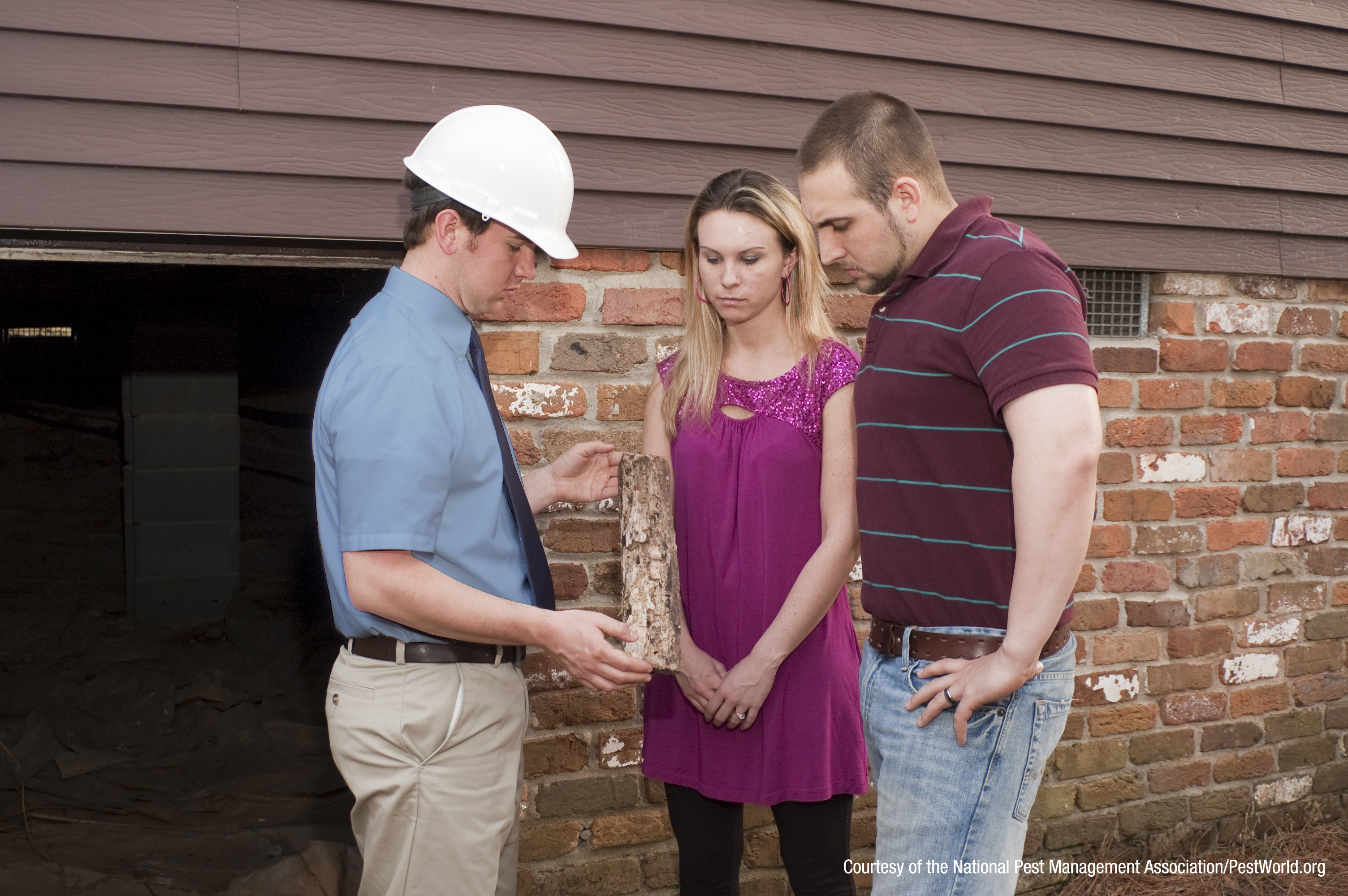 Most bats leave their roosts at dusk and return around dawn. When traveling, they first stop at a stream or pond for a drink of water before feeding. Female bats of most species tend to only reproduce one pup, but some species can give birth to two to four pups. At birth, a baby bat weighs up to 25 percent of its mother’s weight. While young bats are taken care of by females in the colony, male bats do not contribute to the caring of the babies.

Bats are a very important part of the pollination process, as they feed on insects that visit flowers and also feed on various types of fruit that helps disperse seeds. Since many bats do feed on insects, they can help keep pest insect populations down.

A few common bat species in North America are the big brown bat, the little brown bat, and the Mexican free-tailed bat.

Big brown bats: A female big brown bat will form her nursery colony with other pregnant females in the spring while the male roosts somewhere else, usually alone or with other males. These bats can become an issue around the home, as they commonly build colonies in attics and shutters. Big brown bats feed on insects like beetles, ants and flies. This species is able to fly up to 40 miles per hour, the fastest flight speed reported for any bat. When migrating, big brown bats travel short distances and hibernate in small groups in hollow trees, caves and buildings.

These bats are dark in color with a pale colored stomach. They have no fur on their wings and have 32 small teeth for feeding. Big brown bats are common in southern Canada and the United States.

Little brown bats: One little brown bat can catch up to 600 mosquitoes in an hour. They alternate feeding flights with rest periods, where they return to their nests to digest their meals. Unlike the big brown bat, this species’ flying habits are erratic, with flight speeds averaging 12.4 miles per hour. Female little brown bats will form nurseries in the spring after hibernating throughout the fall and winter months.

Little brown bats tend to vary in color and have 38 teeth. They can be found in Alaska, Canada and in the United States.

Mexican free-tailed bats build their colonies based on where they are located. They can build colonies in structures, such as houses or churches, along the West Coast of the United States, but will opt to live inside caves from Texas to Arizona. In order to hibernate, the Mexican free-tailed bats living from Texas to Arizona will relocate to Mexico.

These bats vary in color from dark brown to dark grey. They have 32 teeth and can be found throughout the southern United States to the west coast.

A big concern most homeowners have is whether or not the bats infesting their home have rabies. Unfortunately, it is impossible to tell if the bats have rabies solely based on appearance, so testing must be conducted. If transferred, rabies is a deadly disease that causes inflammation of the brain and sometimes death. However, bats are rarely rabid, with only less than 10 percent documented of becoming rabid.

In addition to the threat of rabies, the fungi that harbor in bat droppings can cause a lung disease known as histoplasmosis. An accumulation of droppings should be professionally decontaminated and removed.

Aside from affecting human health, bat droppings can also damage the home. One bat can produce between 20-30 droppings a day. Because bats typically colonize in large groups, the number of droppings in a home can easily pile up and cause roofs to cave in. Their waste also attracts other pests like cockroaches, and the smell of their feces encourages other bats to invade the home.

Bats can pose a serious health threat to humans if they are found inside a structure. Fungi that harbors in bat droppings can cause the lung disease, histoplasmosis. An accumulation of droppings should be professionally decontaminated and removed.

A small percentage of bats are also infected with rabies, but may not show symptoms. Rabies can be transmitted when saliva or even the body tissue of an infected animal comes into contact with another animal or human. Therefore, it is important to seek medical attention if you've had any unprotected, physical contact with a bat.

In addition, if an infestation develops, it is important to treat the area for bat mites and bat bugs, which will bite humans.

How to Get Rid of Squirrels

Squirrels can be much more than just a nuisance. Learn more about these creatures and how to keep wildlife in the wild.

Why Do Skunks Stink?

Skunks are notorious for their stinky smell, but have you ever wondered why they smell?

Raccoons are particularly a concern in areas where their populations are thriving, such as the east coast and in cities. Learn more about these wild animals.

Along the west coast, there are five squirrel species that frequent backyards (and occasionally the confines of our homes). Learn more about these species.

Read on to find out what squirrels look like, what they eat, where they live and whether or not they are a threat to humans.

Top Tips To Keep Wild Animals In The Wild

Here are some helpful tips to ensure that no curious critters sneak in through the attic, basement or other susceptible areas of the home.