Everything You Need to Know About Yellowjackets

Yellowjackets are a very common summer and fall pest in the United States, and while they are grouped in the general category of stinging insects, yellowjackets have some pretty unique characteristics. Understanding what sets yellowjackets apart is the first step in controlling them on your property and reducing the likelihood of stings. 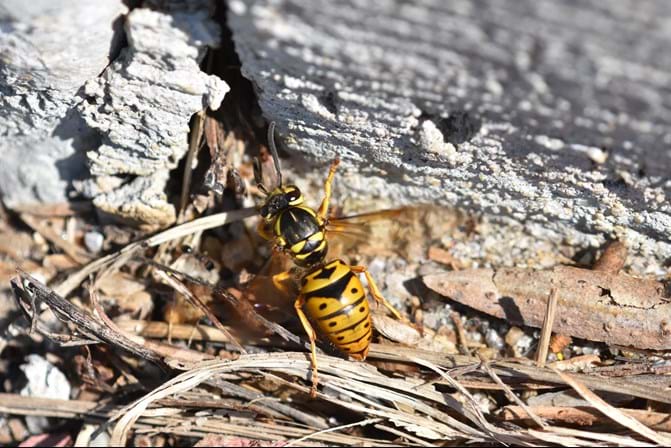 Not surprisingly, yellowjackets get their common name from their typical black and yellow color pattern banded across their abdomens. They are primarily flying insects, similar to bees, but are more noticeably segmented with a very small ‘waist.’ While most species are yellow and black, some can also have white or red markings.

Yellowjackets, wasps, and hornets may look alike and have similar characteristics, but they can be very different in their level of aggressiveness and their habits. It is important to properly identify the type of stinger in your home or garden before attempting any type of control.

Yellowjackets are found worldwide, and there are about 16 species that reside in the U.S. They are social insects that have annual colonies; only the queen lives through winter to start a new colony in the spring. Depending on the species, the queen will pick either an underground or aerial site to build her nest. Common places for a nest are attached to bushes, trees, or the eaves of homes. Yellowjacket nests are built with a recognizable paper-like material made from chewed cellulose.

Like many other flying insects, adult yellowjackets feed on sugary substances such as flower nectar, fruit, and the occasional soda when they find an open can. What makes yellowjackets unique is that they consume protein in their larval stage. Workers bring insects and other types of meat back to the nest as food for the larvae. Most homeowners consider yellowjackets a pest, but their diet actually makes them an important part of garden pest control.

Yellowjackets are normally very slow to sting, but they are also very territorial. If the entrance to their nest is approached, they will become very aggressive. They can sting multiple times, and their stings can be very painful. People who are allergic to their venom could have a severe reaction, and it is possible to become hypersensitive to yellowjackets after being stung. This sensitivity could cause a serious problem if stung again in the future.

It is very important, if you believe there is a yellowjacket nest on your property, to call a pest professional. Attempting to remove the nest without a professional could result in being stung or driving the insects into your home. Proper removal requires special equipment and safety precautions and is best handled by a professional.