In February 2013, the National Pest Management Association (NPMA) and the University of Kentucky surveyed a nationwide sample of pest management professionals. This summary features the latest findings about the growing bed bug resurgence and references data from the 2010 and 2011 Bugs Without Borders surveys for year-over-year comparisons.

Bed bugs continue to plague American cities, large and small and are being reported in virtually every place people tend to live and gather. In the third installment of the Bugs Without Borders survey, bed bugs are found to be as much, if not more of a problem today than they were a few years ago.

The 2010 survey gave the American public insight into the global bed bug resurgence in a way no other survey had before. In 2011, the U.S. pest management industry offered additional perspective on the extensive nature of the bed bug problem and whether circumstances had improved or gotten worse in that year. The new 2013 report highlights the latest findings on today’s continuing pervasiveness of the bed bug epidemic in the United States. The survey was conducted from January 19 to February 18, 2013, and is based on responses from 251 pest management companies across the United States.

The Epidemic is Not Waning. The survey reveals that nearly every pest management professional (99.6 percent) — from coast to coast — has encountered a bed bug infestation over the past twelve months, compared to the 99 percent who reported bed bug encounters in 2011 and 95 percent from 2010.

The one potential bit of encouraging news is that seven out of ten survey respondents report that bed bug infestations are increasing, down from nine out of ten that reported the same two years ago —yet only 3 percent in the latest survey felt the incidence of bed bugs in their area was decreasing.

Nearly half (49 percent) of respondents say that bed bug infestations are a seasonal problem occurring most often in the summer and least often in the winter. Although pest professionals are divided on whether there is a “peak season” for bed bugs, more than half of those who notice a seasonal difference receive more calls during summer.   As more people tend to travel and relocate during the summer months, it is possible that a greater number of people unknowingly transport the bugs back home from their travels, or discover them soon after moving.

Bed Bugs Are Nearly Everywhere. Bed bugs continue to most commonly be found in residences including apartments/ condominiums and single-family homes, with 98 percent and 96 percent of respondents treating these dwellings respectively. The incidence of infestation in these environments is slightly higher than the 2011 survey findings of about nine out of ten respondents reporting treatment.

Bed bugs do not tend to be confined to just residential environments. High numbers of respondents continue to report infestations in other places outside of the home, including:

Detection and Control Methods Are Changing. Visual inspection by trained service technicians continues to be the most popular method of finding bed bugs, used by 99 percent of respondents, however, other methods have gained in popularity compared to previous years. Pitfall and active monitoring traps (used to detect subtle bed bug presence) are used by 50 percent and 35 percent of respondents, compared to 46 percent and 27 percent in 2011.

Interestingly though, canine detection, which had seen a steady increase in use throughout the past few years, dropped slightly in popularity with 40 percent of respondents reporting to use this method compared to 43 percent in 2011.

Bed bugs continue to be the most difficult pest to control, according to 76 percent of survey respondents, a slight increase over the 73 percent who considered bed bugs most challenging in 2011.  By comparison, only  17 percent point to ants, 6 percent specify cockroaches and 1 percent list termites as the most difficult pests they face .

About two-thirds (67 percent) of respondents point to homeowner clutter as the biggest customer-oriented challenge in treating bed bugs; 58 percent said customers not following advice and 16 percent said reinfestation (reintroduction of the bugs).

Public Awareness and Vigilance is Key.   The findings from the 2013 Bugs Without Borders survey demonstrate that, throughout much of the country, bed bugs are as much, if not more of a problem today than they were a few years ago. These pests continue to plague people wherever they go  — from home, to school, to places of employment, when staying in hotels, taking public transportation and more. As bed bugs continue to inflict their bite on America, it will be important to continue to raise public awareness and encourage vigilance, as these methods are still the best way to prevent infestations from spreading.

Dr. Michael F. Potter is a professor and urban entomologist at the University of Kentucky, Lexington, Ky. Dr. Jim Fredericks is the director of technical services and Missy Henriksen is the vice president of public affairs, respectively, for the National Pest Management Association, Fairfax, Va.

The NPMA, a non-profit organization with more than 7,000 members, was established in 1933 to support the pest management industry's commitment to the protection of public health, food and property. For more information, visit PestWorld.organd AllThingsBedBugs.org, NPMA’sresource on everything bed bug related, from prevention tips to current news. 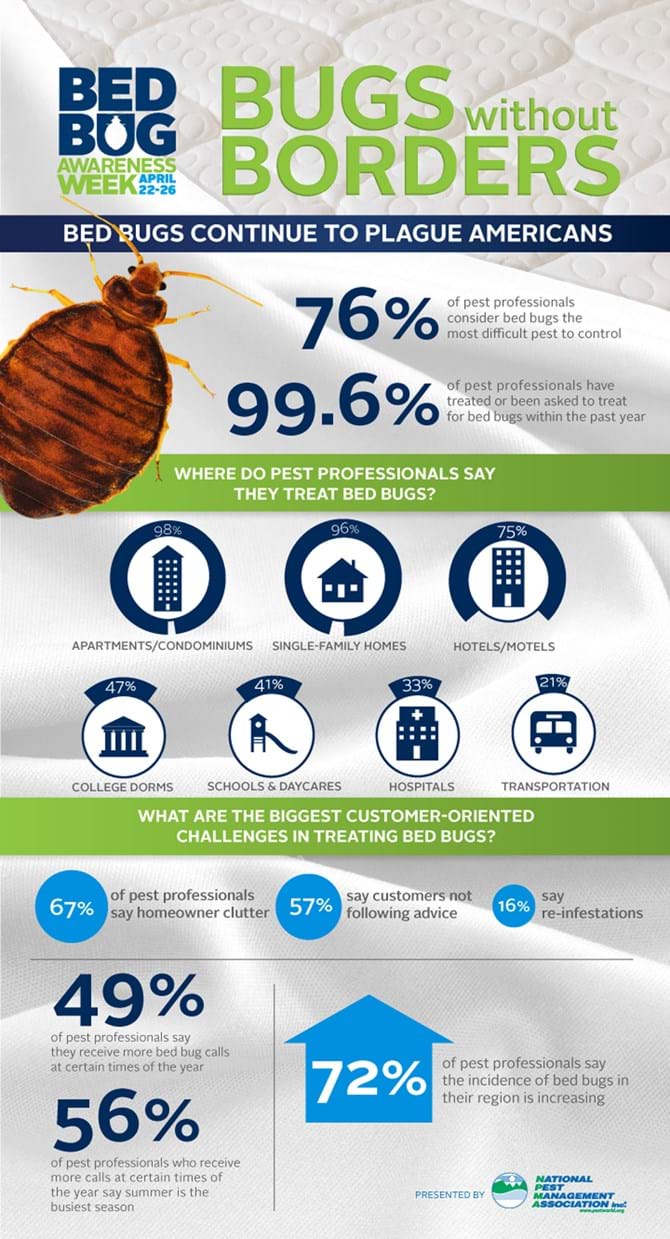 How To Prevent Stink Bugs

Stink bugs are an invasive species that release a smelly odor when crushed. Find out how to keep them out of your home this fall.