Lyme disease is caused by bacteria called Borrelia burgdorferi (B. burgdorferi), which is typically carried by blacklegged (deer) ticks. The ticks pick up the bacteria when they bite mice or deer that are infected with B. burgdorferi and then transmit these bacteria to humans as well as dogs, horses and cattle in some cases, thereby causing infection.

In most cases a tick must be attached to a person's body for 24-36 hours to spread the bacteria into the bloodstream. Because blacklegged deer ticks are very small (the size of a poppy seed) and can be difficult to detect, many people who are diagnosed with Lyme disease may have never even noticed a tick on their body. Fortunately, most people who are bitten by a tick do not get Lyme disease, as most ticks are not blacklegged ticks and do not transmit B. burgdoreri. Additionally, not all blacklegged ticks are infected with the Lyme bacteria or may not be on the body long enough to transmit infection. The somewhat lengthy period that a tick must be on a body before infection takes hold, underscores the necessity of performing a thorough tick check after spending any time outdoors. 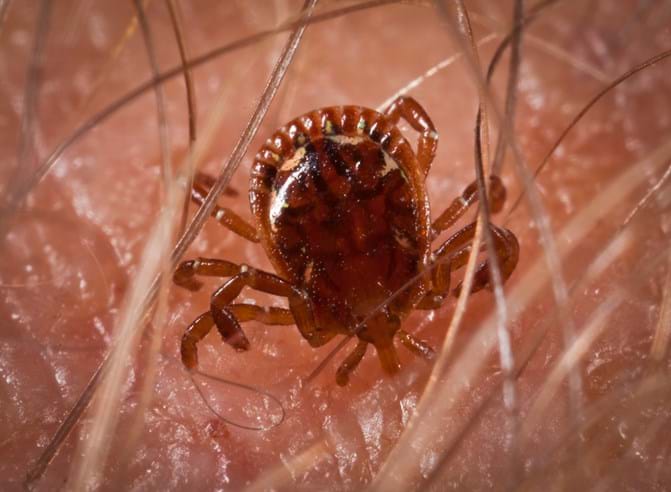 Lyme disease was first reported in the United States in 1977 in the town of Old Lyme, Connecticut, and New England continues to be the area with the greatest amount of Lyme disease. In fact, 95 percent of Lyme cases occur in 15 states - most heavily concentrated in New England and the Mid-Atlantic states. Another high risk area for Lyme infections are the North-central states, mostly in Wisconsin and Minnesota. The third area of highest Lyme transmission is along the Northwest coast, including northern California and the Pacific Northwest.

Untreated Lyme disease can progress through three stages and may cause different symptoms, depending on how long the patient has been infected and which body parts have been affected by the infection.

The most classic sign of Lyme infection is an expanding, circular red rash called erythema migrans (EM). The early localized EM rash is a flat or slightly raised expanding red spot at the site of the tick bite with a clear area in the center giving it a "bull's eye" appearance. Typically it is > 5 cm (2 inches) in size, but can be much larger. Without treatment, EM can last 4 weeks or longer. Other times the rash may present as a homogenous ovoid rash (lacking central clearing). Atypical rashes have also been reported (blisters or a necrotic lesion that may be mistaken for a spider bite or Staph infection). On the other hand, some people may get a small bump or redness at the site of a tick bite that goes away in 1-2 days, like a mosquito bite. This is not a sign of Lyme infection. 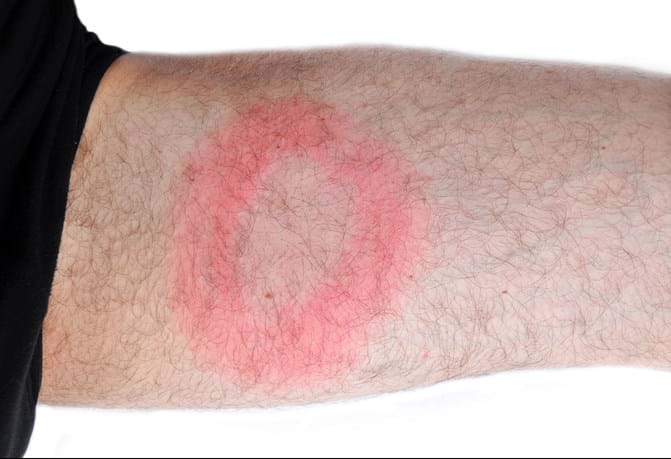 Other signs and symptoms of early Lyme infection are non-specific and may include flu-like symptoms. People may complain of a general ill feeling and lack of energy. Often there are headaches and stiff neck. Many people complain of joint pain. Fever and chills, swollen lymph nodes and muscle pains are also common. Some people may not develop (or notice) a rash. Others may lack the generalized signs and symptoms of infection. Yet others may have these findings, but not seek medical attention. Unfortunately, untreated Lyme disease can progress and spread to the brain, heart and joints.

Untreated, B. borgdorferi may spread from the site of the bite to other parts of the body, typically affecting the skin, joints, nervous system and the heart. The infection may produce a mix of symptoms that may wax and wane. Often multiple EM lesions appear in additional areas of the body. These typically are a paler shade of red, and may be smaller than the EM of early localized infection.

Other signs and symptoms of infection include not being able to use the muscles of the face. Loss of muscle tone or paralysis on one or both sides of the face is called facial or "Bell's" palsy. Many patients present with severe headaches and neck stiffness due to meningitis (inflammation of the spinal cord). Others may complain of other neurologic problems such as pain, weakness, or numbness in the arms or legs, and poor memory and reduced ability to concentrate. Arthritis is another leading symptom with episodes of pain, redness and swelling in the large joints, most typically the knees. Others may suffer heart palpitations and dizziness due to changes in heartbeat.

Many of these symptoms will resolve over a period of weeks to months, even without treatment. However, in other cases that are left untreated, Lyme disease will progress and can result in additional complications.

A small number of persons with untreated infections may go on to develop chronic conditions that can occur months or years after the infections first occur. The most common are recurrent bouts of arthritis, with severe joint pain and swelling (Lyme arthritis). Large joints - especially the knees - are most often affected. Arthritis caused by Lyme disease manifests itself differently than other causes of arthritis and must be distinguished from arthralgias (pain, but not swelling, in joints).

Brain and nervous system problems may develop chronic months to years after infection. These include shooting pains, numbness or tingling in the hands or feet, and problems with memory, mood or sleep, and sometimes problems speaking or with vision may occur. Heart problems are rare, but can become present long after one is bitten by an infected tick. These may include problems with heart rhythm, or inflammation of the structures surrounding the heart.

Some patients with Lyme disease have persistent subjective symptoms that last months to years after treatment with antibiotics. These symptoms can include muscle and joint pains, cognitive defects, sleep disturbance, or fatigue. The cause of these symptoms is not known, but there is no evidence that these symptoms are due to ongoing infection with B. burgdorferi. There is some evidence that these lingering symptoms are caused by an autoimmune response, in which a person's immune system continues to respond, doing damage to the body's tissues, even after the infection has been cleared. Studies have shown that continuing antibiotic therapy is not helpful and can actually be harmful, Management of these patients can be quite challenging as often they seek additional, repeated courses of therapy for their persistent symptoms.

Diagnosis can be made on clinical criteria alone. In areas where Lyme is known to occur, a history of outdoor activities, with or without a known tick bite in the presence of an EM rash is enough to warrant treatment. Typically, no special testing will be performed as it usually takes four to six weeks for antibodies against B. borgdorferi to develop. Thus, blood tests may be negative in 60-80 percent of the cases of early Lyme infection.

Typically, doctors order two-step testing which consists of a highly sensitive, but less specific screening blood tests using enzyme-linked immunosorbent assay (ELISA)for antibodies directed against B. borgdorferi. If the screening test returns negative, the patient is considered negative and no further testing is performed. If the ELISA is positive, then the more specific Western Blot (WB) confirmatory test is performed. The Centers for Disease Control and Prevention (CDC) has developed evidence-based criteria for Western blot interpretation to determine if the test is positive, negative or indeterminate.

Newer testing methods have been developed, but have not yet been recommended for general use in the Infectious Diseases Society of America (IDSA) Clinical Practice Guidelines for Lyme.

Like in early disseminated infection, diagnosis is made using a combination of clinical suspicion and laboratory testing. In late disease laboratory tests are nearly universally positive. The absence of seroreactivity (reactivity of blood serum, especially to a virus) in such a patient excludes the diagnosis of Lyme disease. However, a positive Lyme test result does not prove a patient's current symptoms are due to Lyme. Persons who were treated for Lyme disease previously will often continue to test positive after cure.

In patients where Lyme infection of the brain or nervous system is suspected, a comparison of cerebral spinal fluid (CSF) Lyme antibody levels compared to blood levels may be helpful, with higher levels in the CSF than the blood supporting neuro-Lyme infection.

It's best to avoid indiscriminant laboratory testing, especially in areas without high concentrations of Lyme infection. Subjective symptoms alone, such as fatigue, neurocognitive symptoms and fibromyalgia-like symptoms are not regarded as an indication for Lyme testing, as these symptoms are too vague to strongly support Lyme infection. Indiscriminant testing, even using a highly sensitive and specific test, will inevitably lead to many false positive diagnosis. This in turn will lead many people to be inappropriately treated for a Lyme infection that they do not have, as well as delaying the workup for the true underlying cause of the patient's signs and symptoms.

During the summer months, it's best to take precautions against ticks whenever outdoors, especially in areas known for tick populations.