What is an Earwig?

Earwigs are slender insects that get their name from the old European myth that they crawl into people’s ears and tunnel into their brains while they are sleeping. While this superstition has no scientific backing, the pincers located on the back of an earwig’s abdomen are quite frightening to many people. There are more than 20 different earwig species occurring in the United States. Read on to learn about earwig control and how to get rid of earwigs.

Earwigs range in size from ¼-1 inch long. They have elongated, flattened bodies that vary in color from pale brown with dark markings to reddish brown to black. Earwigs have six legs and threadlike antenna that measures about half of their body length. Most notably, however, are the pincers that protrude from the back of their abdomen. Earwigs also have two pairs of wings, with their hind wings usually folding underneath their front wings. These body parts typically have a leathery appearance to them. Not all earwig species fly, and those that do only do so in short bursts.

Do Earwigs Really Go in Your Ear?

Contrary to European folklore, earwigs do not crawl into ears and eat peoples’ brains at night.

In order to prevent any structural entry by earwigs, cracks and crevices should be well sealed with a silicone-based caulk, steel wool or a combination of both. This practice includes sealing doors and windows, as well as attic and foundation vents. Since earwigs prefer moist protected areas, they usually congregate in areas with high condensation such as unventilated basements. Earwigs are also attracted to dirt and leaves, so an unfinished basement floor is an ideal environment for these pests. Using a dehumidifier and cleaning up cement floors can help prevent earwigs from getting comfortable in a household.

If you suspect an earwig infestation in your home, contact a licensed pest control professional to conduct an inspection and work with you to develop an earwig control and treatment plan.

How to Get Rid of Earwigs

In order to get rid of earwigs or prevent an infestation, homeowners should remove harborage sites such as leaf piles, mulch piles or other vegetation on their property. They should also consider moving objects such as firewood piles and logs away from the home, thereby creating a perimeter around the house that is free of organic material.

Furthermore, any trees or shrubs that cause damp, shady areas around the house should be trimmed. In order to ensure proper water drainage, check to make sure gutters and downspouts drain away from the home. This will help prevent any moisture build up that might attract earwigs. 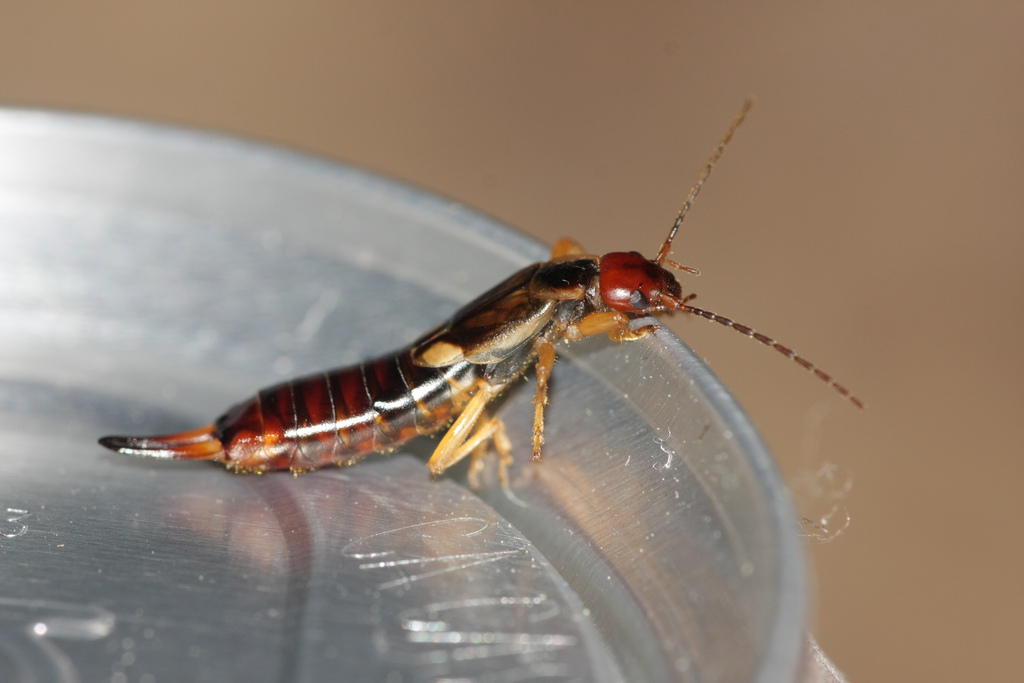 These insects live together outdoors in large numbers. Earwigs can be found under piles of lawn debris, mulch or in tree holes. They gain entry to a structure through exterior cracks.

In addition to not crawling into peoples’ ears at night, earwigs also do not spread diseases. However, some species produce a foul-smelling liquid as a self-defense mechanism, and their menacing appearance can be alarming to homeowners. In any case, earwigs actually pose a greater threat to garden plants, rather than people.

While their pincers are used primarily to aid in reproduction, hunt prey and for defense, earwigs will pinch humans if they are picked up and agitated. While the pinch can sometimes be painful, no venom is transferred, and the pinch rarely breaks the skin. Additionally, earwig pincers do not spread disease.

Earwigs usually spend their days hiding while feeding on leaves, flowers, fruits, mold and insects at night. During the day, most earwig species tend to seek out cold, wet areas that are left undisturbed, such as small, moist crevices. When feeding at night, these insects prefer decaying vegetation and plant items found beneath mulch or wet leaves. Additionally, certain types of earwigs will target seedlings, potentially rendering crops and garden plants unproductive due to the damage caused by these insects. Some earwig species will also prey on smaller arthropods and insects.

When startled or uncovered, earwigs will quickly move and run away. They can be found living together outdoors in large numbers, usually congregating under piles of lawn debris, mulch or in tree holes. This is a habit that scientists believe is caused by a pheromone produced by these insects.

When provoked by a need for food or a change in weather, earwigs may infiltrate households by way of exterior cracks and openings. Once inside, they are found near water sources, such as bathrooms, laundry rooms and kitchens. Earwigs have also been known to make their way into other household areas such as family rooms and bedrooms. Furthermore, these insects are attracted to lights, causing them to become a nuisance on patios and porches during summer evenings.

After spending the winter in small burrows in the ground outdoors, female earwigs will lay eggs in these burrows come springtime. These relatively small eggs are round in shape and white to tan in color. Earwigs have been known to display maternal characteristics, tending to the eggs until they hatch and caring for the nymphs until they are able to find their own food.

Browse the occasional pests slideshow to learn more about these uninvited houseguests.

How to Get Rid of Silverfish

Silverfish are most commonly found in bathrooms, attics, and basements. Read our tips on how to get rid of silverfish in your house.

With the holiday season upon us, the National Pest Management Association (NPMA) is educating homeowners about certain insects that can infest and contaminate food in pantries. Pantry pests like Indian meal moths and merchant grain beetles can become difficult to control once they get inside.

Browse the occasional pests slideshow to learn more about these uninvited houseguests.