Boxelder bugs, named for the maple and seed-bearing boxelder trees on which they feed and lay eggs during the warmer months, often become nuisances in the fall as they search for overwintering sites. They are most frequently seen congregating in warm spots before migrating indoors to overwinter in insulated cracks and crevices. During the change in season, they can become a nuisance to homeowners as they invade in large numbers.

Boxelder bugs are black with reddish or orange markings on their back. Their body shape is a somewhat-flattened and elongated oval that is about 1/2 an inch long. They have six legs and two antennae. 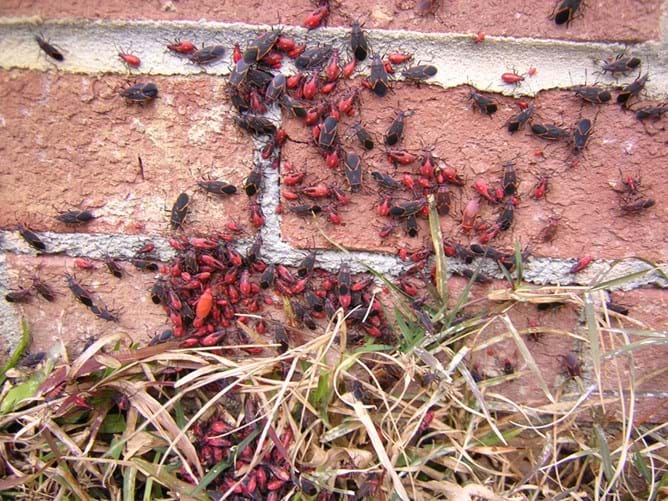 Where do boxelder bugs live?

Boxelder bugs are native to the western United States, but can be found from eastern Canada throughout the eastern U.S. and west to eastern Nevada, wherever boxelder trees are found. They emerge from hibernation in spring and spend the warm months feeding on their host trees until cool temperatures move in.

What do boxelder bugs eat?

Boxelder bugs feed mainly on boxelder tree seeds and newly developing leaves, which may result in discoloration of the foliage. They will also occasionally feed on the fruits of plum and apple trees.

What are the habits of boxelder bugs?

In autumn, boxelder bugs congregate in large numbers on warm rocks, trees and buildings where the sun hits. After large masses gather, they migrate to nearby buildings or homes to overwinter. These pests tend to hide in small cracks and crevices in walls to insulate themselves from the cold winter temperatures. 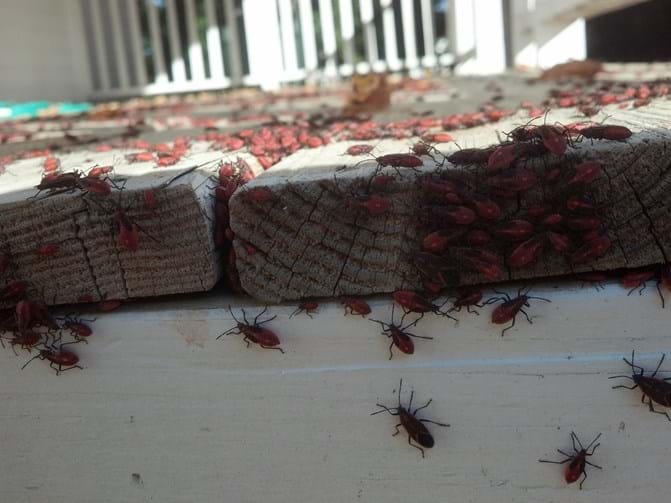 What problems can boxelder bugs cause?

Boxelder bugs can become a significant nuisance when large groups of them invade homes. They are not known to bite, but their piercing-sucking mouthparts can occasionally puncture skin when they are handled, causing a slight irritation and producing a red spot similar to a mosquito bite. When crushed or handled roughly, boxelder bugs sometimes produce a strong, unpleasant odor and their fecal material can leave reddish-orange stains that result in fabric discoloration.

How do I prevent or get rid of boxelder bugs?

To prevent boxelder bugs from invading homes in the fall, repair holes in window and door screens, seal cracks and crevices with a good quality silicone or silicon-latex caulk and install door sweeps to all exterior entrances. When attempting to get rid of boxelder bugs that have already entered a home or building, no attempt should be made to kill them in wall voids because dead insect bodies can attract dermestid beetles. Rather, using a vacuum cleaner to remove them may provide temporary relief. The bag should be removed to prevent the bugs from escaping.

If a boxelder bug infestation is suspected, a licensed pest professional should be called to evaluate and assess the problem.