Flies 101: Different Types of Flies and the Threats they Pose

A Guide to Identifying and Preventing Various Fly Species

Flies are a common pest around the world – with more than 120,000 kinds of flies found globally, and 18,000 of those found throughout North America. Although flies have short lifespans, they are able to quickly reproduce in large numbers and are also capable of spreading various dangerous diseases, including malaria, salmonella and tuberculosis.

Where do flies come from?

Flies typically hatch outside and then make their way into our homes through structural weak spots, such as damaged weather stripping or torn screens covering windows and doors. Around the home, flies can lay their eggs in garbage cans, compost piles, excrement, and rotting organic material. Female flies can lay between 75 to 150 eggs at a time, which if compressed together only adds up to roughly the size of a pea, making them extremely difficult to identify.

Houseflies are widespread because they reproduce quickly and in large numbers. At times, they have been known to move up to 20 miles from where they were hatched, but they usually stay within one mile of their birthplace. Fruit flies, another common fly type, are usually found within the home because of their attraction to food waste like overripe or rotten produce. They typically enter the house as hitchhikers on produce and other food brought in from the outside. Horse flies are not commonly found inside and do not feed indoors, but sometimes enter homes by accident through open windows and doors. 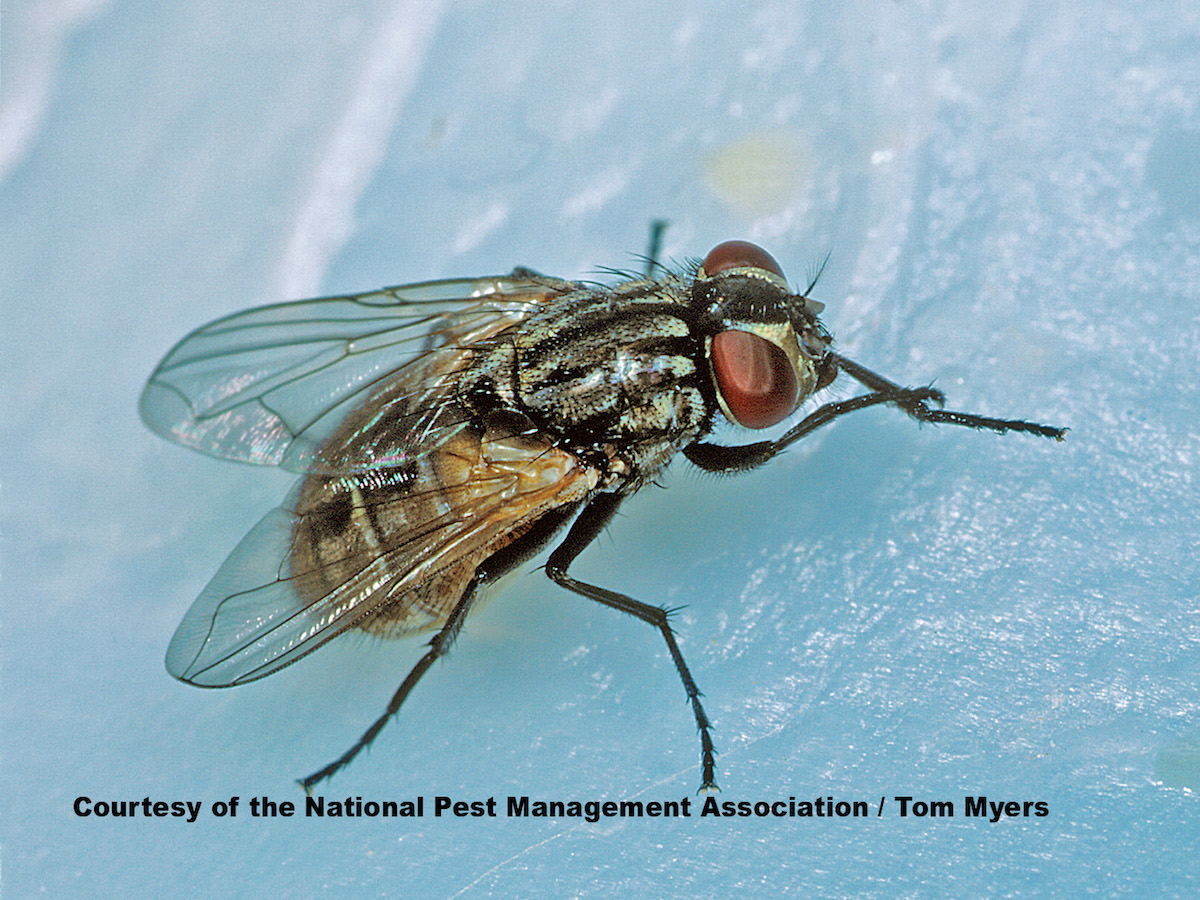 General Info:
The house fly is the most common type of fly found in and around homes. They can be found worldwide and are widespread throughout the United States.

Appearance:
House flies are typically gray in color and have four black stripes on their thorax. Adult house flies are about 1/8-1/4” long. They have slightly hairy bodies, a pair of wings and compound red eyes that contain thousands of individual lenses, giving them wider vision. House flies do not have teeth or a stinger.

Habits:
Depending on conditions, it can sometimes take as little as six days for a house fly to develop from egg to adult. Similar to various other pests, the house fly experiences a four-phase life cycle, which begins when a fertilized female house fly finds a suitable location to lay her eggs, oftentimes on feces, rotting meat and food or garbage. Female house flies usually only mate once but are capable of producing between 350-900 eggs in their lifetime. Their larvae, known as maggots, are pale-whitish. These legless larvae feed at the egg-laying site for three to five days. At the conclusion of this period, maggots seek out a dark, dry and cool environment to develop in. Over the course of three to six days, the pupae develop legs and wings, and grow into fully-grown adult house flies. After two to three days, the adult female house flies are fully ready and able to reproduce, restarting the life cycle. Adult house flies typically live 15-25 days.

Since house flies don’t have teeth, they can only feed on liquids. However, they use their sponging mouthparts to liquefy many solid foods through spitting or regurgitation. Their tongues are shaped like straws to suck up the food. House flies feed on a wide variety of substances such as human food, animal carcasses and garbage. They are particularly attracted to pet waste because of its potent odor.

Threats:
Although house flies do not bite, they are capable of transferring more than 100 different pathogens, including salmonellosis, typhoid and tuberculosis. This kind of fly can contaminate food surfaces by spreading disease organisms picked up on their legs and mouths when feeding on trash, feces and other decaying substances. They also defecate constantly, which further spreads bacteria.

General Info:
Fruit flies are found throughout the United States and are known for their ability to rapidly reproduce. They can be found indoors year-round, and depending on the conditions, their lifespans can last 25 to 30 days.

Appearance:
Adult fruit flies are typically 3 to 4 mm long and appear to be brown or tan in color. They usually have red eyes, but some fruit flies have darker eyes. They have a tan thorax with a black and grey abdomen. Fruit flies have six legs and are small and oval in shape with antennae.

Habits:
Fruit flies are attracted to and eat rotting food matter, especially fruits and vegetables, and any fermenting liquids, like beer, liquor and wine. They are also attracted to and sometimes breed in dark, moist and unsanitary environments like drains, garbage disposals and trash bins. Fruit flies are able to reproduce very quickly, making them difficult to control. Female fruit flies can lay around 500 eggs, which can hatch in as little as 24 hours. Similar to other fly species, fruit flies have a four-stage lifecycle, which can be completed in as little as a week in ideal conditions.

Threats:
Not only are fruit flies a nuisance pest, but they are also capable of contaminating food with harmful bacteria and disease-causing pathogens, since they are typically found in unsanitary conditions, just like house flies. 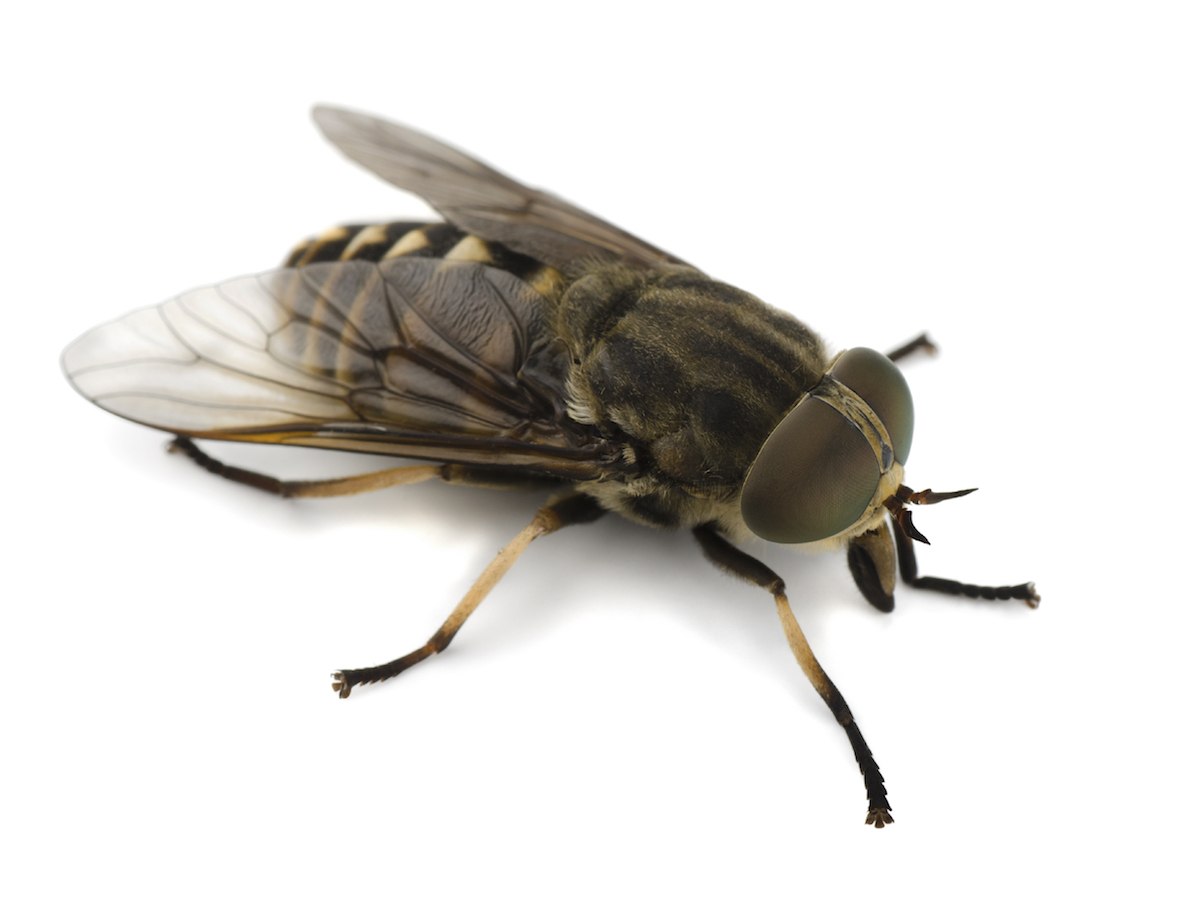 General Info:
This type of fly likely received their common name because they are notorious pests of horses and other mammals. They are commonly found in both suburban and rural areas near bodies of water, which serve as breeding sites, and where mammal hosts are most abundant.

Appearance:
Horse flies have a gray or blackish body and are 10 to 30 mm long. They usually have wings lacking dark areas, but some species have entirely dark wings. They have large eyes that are usually green or purple with horizontal stripes. Horse flies have six legs and are stout-bodied and without bristles. They also all have short antennae.

Habits:
Adult horse flies are fast, strong fliers and capable of flying for more than 30 miles, though they generally do not disperse widely. They most often attack moving and dark objects. Horse flies often rest on paths and roads, especially in wooded areas, where they wait for potential hosts. Horse flies are attracted to light and will sometimes congregate at windows. They are most evident on windless, hot and sunny days. Larvae develop in wet soil close to bodies of water.

Female horse flies feed on blood aggressively, while males do not consume blood but rather feed on pollen and plant nectars. Female bites can be painful because their mouthparts are used for tearing and lapping up blood, rather than just sucking like mosquitoes.

Threats:
Unlike the other kinds of flies, horse flies are not known to be vectors of disease or capable of transmitting harmful disease-causing bacteria. They do, however, have painful bites that can cause allergic reactions. They are also persistent and will continue to bite their host until they either succeed in procuring their blood meal or are killed. Female horse flies are even known to chase their intended targets for short periods of time. 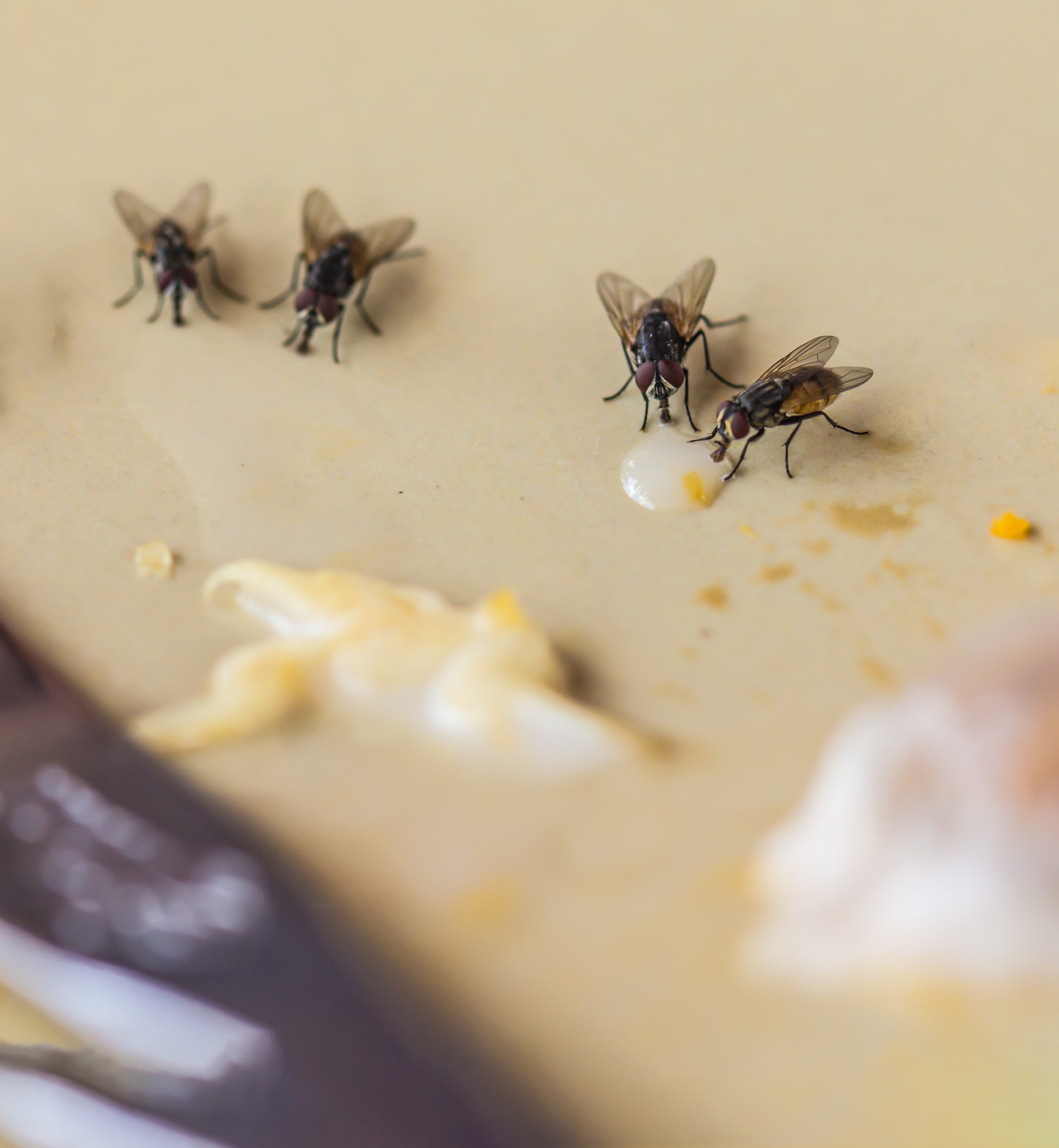 The best method for preventing flies in the home is through vigilant sanitation, including removing trash daily, ensuring all counter surfaces are kept clean, checking that all windows and screens are properly screened, and any decaying food matter is properly disposed of. If you have animals, stay on top of waste removal by emptying litter boxes and picking up around the yard for dog waste.

If a fly infestation is suspected, it’s important to contact a licensed pest control professional to conduct an inspection, specifically looking for any places where fly eggs may have been deposited. Once the breeding site is eliminated, the pest professional will develop a house fly treatment plan based on the circumstances of the infestation.