The Year of the Tick

A tick(ing) time bomb is set to explode this season, in fields, forests and yards across the country, as we head into what is expected to be an extremely heavy tick season.  And with ticks, come the dangers of tick-borne disease, namely Lyme disease.

Health and insect experts are calling it a perfect storm of conditions coming together to create a tick population explosion - lack of acorns and the mild winter. Specifically, the mild winter has allowed ticks, much like other insects to thrive and emerge earlier than usual. As for the acorns, oak trees produced an extremely large acorn crop in 2010, which led to a boom in the white-footed mouse population last year.

As a result, the blacklegged (deer) tick population also increased because ticks had an abundance of mice to feed on when they hatched. However, this spring those same ticks will be looking for their next blood meal and since mice will be in short-supply, the ticks will turn to the next best thing - humans! 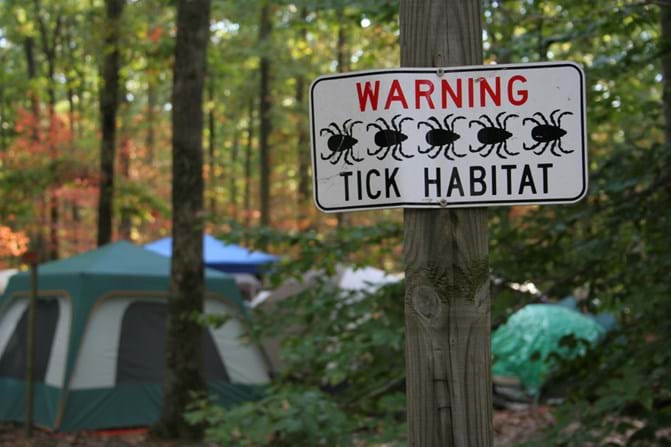 Where The Ticks Are

Most residents of the Northeast United States are familiar with ticks and the risks they pose, but a new study published in the February issue of the American Journal of Tropical Medicine and Hygiene has pinpointed the states where people have the highest risk of contracting Lyme disease.

In addition to the states from Maine to Virginia, the researchers also identified states in the upper Midwest such as Wisconsin, Minnesota and a small part of Illinois as high-risk regions. Additionally, there are several "emerging risk" regions including the Illinois-Indiana border, the New York-Vermont border, southwestern Michigan and eastern North Dakota. Recent news reports are showing a migration of blacklegged ticks into Ohio as well.

In 2010, the latest data available, the Centers for Disease Control and Prevention (CDC) counted more than 22,000 cases of reported Lyme disease.  Of those, 94 percent were reported from 12 states: Connecticut, Delaware, Maine, Maryland, Massachusetts, Minnesota, New Jersey, New Hampshire, New York, Pennsylvania, Virginia and Wisconsin. According to the CDC, Lyme disease is the most commonly reported vector-borne illness in the U.S.

Tick Prevention for You (and Your Pets)

Ticks are small and can be easy to miss, especially if they've latched themselves onto a hairy pet or a spot on a human that's hard to reach or see, such as the top of the head or back.

Ticks are more prevalent in tall grass and wooded areas inhabited by large animals, such as deer. If hiking through the woods, remember to walk in the center of trails to avoid ticks.  While most people may be aware of deer ticks, which carry Lyme disease and are found in the Northeast region of the country, it's important to remember that different species of ticks are found across the U.S. and that they carry a variety of other diseases.

Before heading out, dress in long sleeves and pants and consider tucking pant legs into socks, especially if you will be walking in tall grass or wooded areas. Also, use a tick repellant containing DEET, following the manufacturer's instructions.  For prolonged outdoor activities such as camping, look for clothing and camping gear that is treated with permethrin.

Upon returning home from a walk through the woods, time in the garden or camping, it's important to perform a thorough tick check  - from head to toe. If you find a tick on your body, remove it with a slow, steady pull so as not to break off the mouthparts and leave them in the skin. Then wash hands and bite site thoroughly with soap and water. Flush ticks down the toilet or wrap them tightly in tissue before disposing in a closed receptacle. If you suspect a tick bite, seek medical attention as soon as possible.