Termite ID: How to Spot Termites in Your Home

Every year, termites cause more than $5 billion in property damage in the United States. Termites are known as “silent destroyers” because of their ability to chew through wood, flooring and even wallpaper undetected for years—damage that isn’t covered by most homeowners’ insurance policies.

As spring approaches and the ground begins to warm across the country, termite populations will emerge in search of new structures to invade. Starting from South to North, termite explorers, referred to as swarmers, will look for hospitable homes, with buildings that have sustained damage from severe winter weather particularly at risk. Once swarmers have determined your home to be a good fit, it’s likely that the rest of the termite colony will follow, resulting in a full-blown termite infestation.

By becoming familiar with the species of termites that are most prevalent in their area along with their habits, homeowners are better equipped to detect the warning signs of an infestation, and call in a pest professional to assist with termite identification before the problem gets out of hand. Here’s a handy guide to help you learn how to spot termites in your home and identify their species correctly.

Many people will see termite swarmers in homes during the spring and mistake them for flying ants; this can end up being a costly mistake if the rest of the termite colony follows the swarmers. Winged termites have a straight waist, straight antennae and their wings are equal in size. Flying ants on the other hand have waists that are pinched in the middle, bent antennae and two sets of wings, with the top set being larger than the lower. Termites are also most likely to swarm in the spring, while flying ants may swarm at various times of the year. 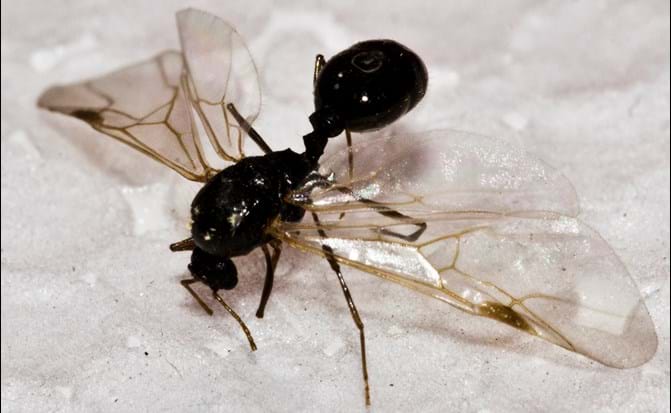 Found in every U.S. state except Alaska, subterranean termites are creamy white to dark brown or black and 1/8 inch long. They live in underground colonies or in moist secluded areas aboveground that can contain up to two million members. Subterranean termites also build telltale “mud tubes” to gain access to food sources and protect themselves from the open air. This termite species is considered to be by far the most destructive of all termites throughout the United States. Using their saw-toothed mandibles to bite off tiny pieces of wood, one piece at a time, they can chew through wood 24 hours a day, seven days a week. If subterranean termites are left unchecked, they have the ability to cause significant structural damage to a building, even causing a total collapse in some cases. 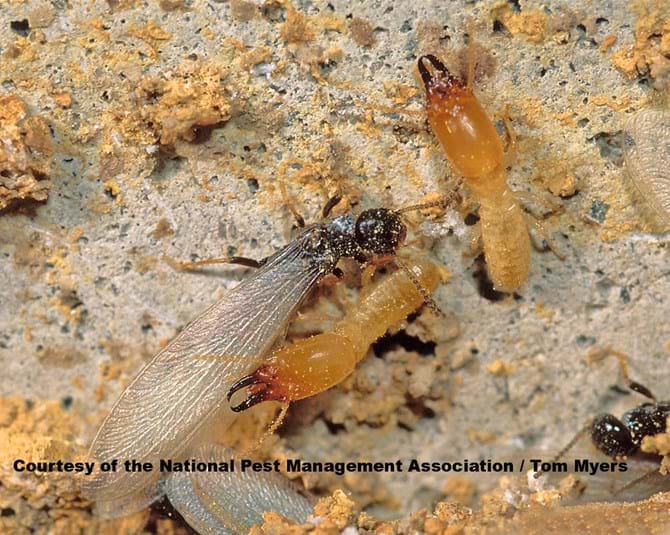 Formosan termites are similar in color to subterranean termites but can grow to 1/2 an inch long. They can be found in Hawaii, California and much of the southern U.S. Originally from China, Formosan termites are the most aggressive known termite species, capable of consuming one foot of 2X4 wood in just 25 days. They live in huge underground colonies with an average of 350,000 workers and build intricate mud nests inside the walls of a structure. This species is known as the most aggressive termite, able to rapidly reproduce and cause significant damage. In fact, a mature Formosan termite colony can cause severe structural damage to a home in as little as six months and queens can birth over 1,000 eggs each. In addition to wood, this species can damage electric cable insulation and telephone coverages, potentially leading to costly damage and power outages. 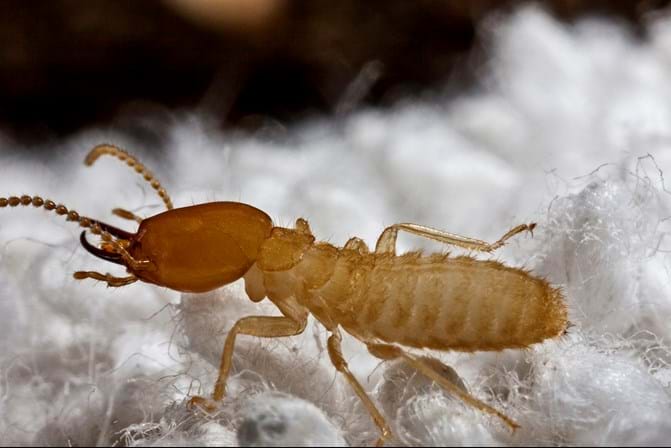 Dampwood termites can be spotted throughout the pacific coastal and adjacent states, the desert or semi-arid southwest, and in southern Florida. This termite species is typically between 1/2 and 5/8 of an inch long. As their name suggests, dampwood termites infest wood with high moisture content, such as dead trees or logs, and don’t usually infest structures because of their need for excessive moisture. However, it is important to avoid attracting them as they can cause serious property damage if they make themselves at home. They're known to be attracted to water-damaged household areas, like spaces suffering from cracked drainpipes or roof leaks. If they get inside a structure, they will hide inside wooden support beams and conceal their entry holes with their own feces. 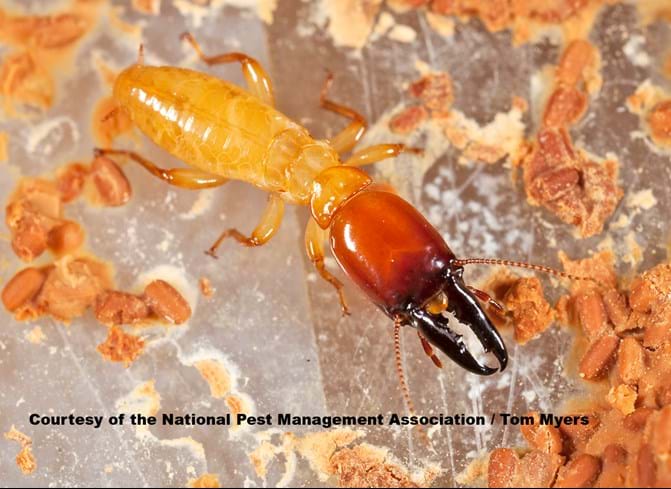 Unlike subterranean and Formosan termites, drywood termites do not require contact with the soil and usually infest undecayed wood. They are typically between 3/8 and one inch long and often establish nests in roof materials and wooden wall supports, along with dead wood that may be around the home. This species can even infest wood furniture and framing if they gain inside access. As such, they can easily and unknowlingly be transported in wood items from one location to another. They are found in the southern states, from North Carolina through the Gulf Coast and in to the coastal areas of California. They form colonies of up to 2,500 members and usually swarm on sunny, warm days after a sudden rise in temperature. 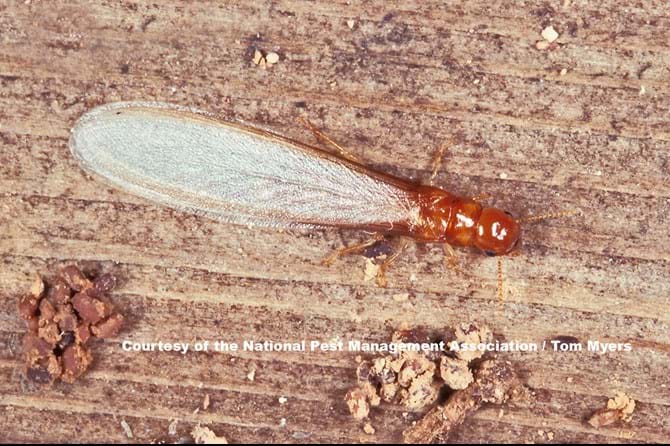 Named for the cone-shaped head their soldiers have, conehead termites travel above ground similar to ants, rather than via underground tunnels like other species. Doing so allows them to travel much faster and efficiently than termites that utilize underground pathways or build "mud tubes." If this species gains entry to a home, they can still construct tunnels through walls and wood flooring, allowing them to potentially go unnoticed for long periods of time. Although conehead termites are primarily found in various southern regions of Florida, any infestation could possibly have a significant impact on the structural integrity of a building. 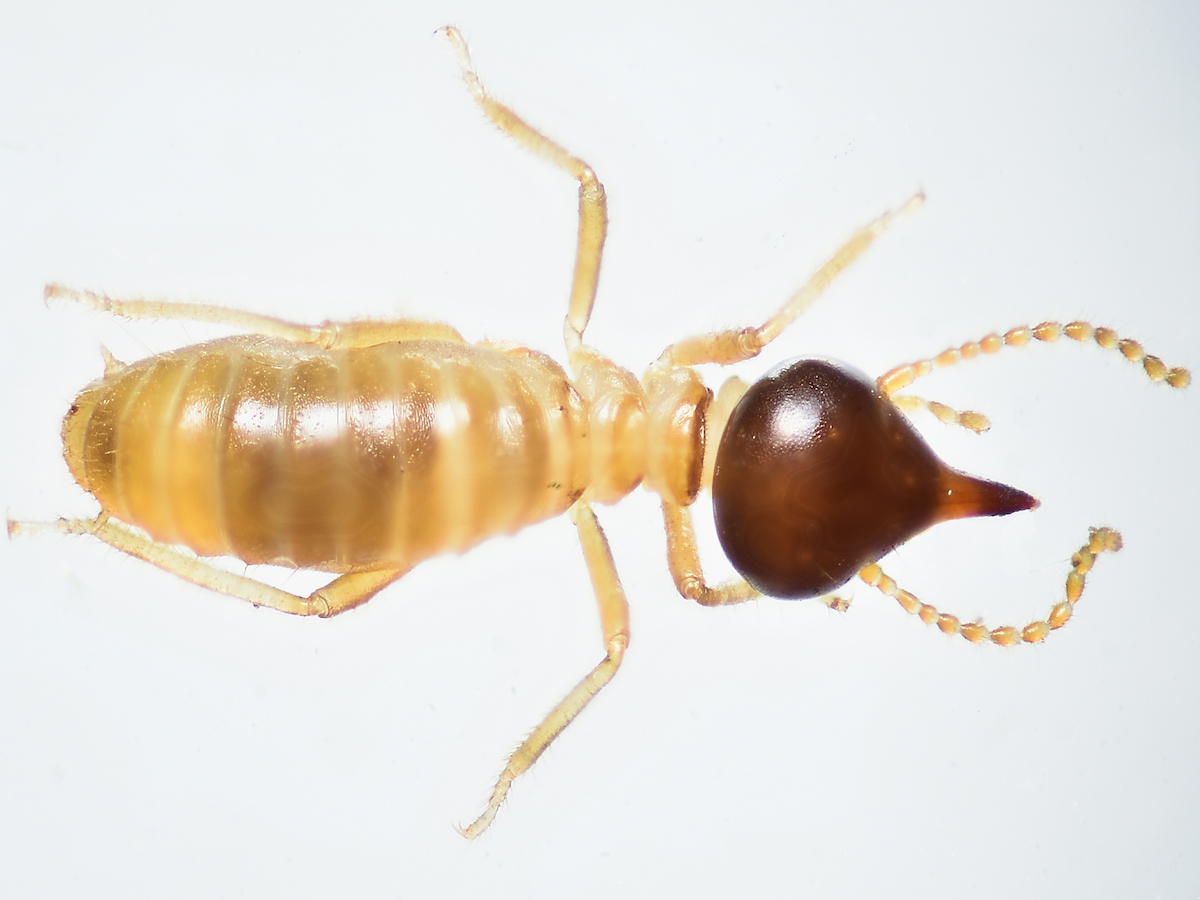 It’s not always possible for an untrained eye to spot evidence of termites, but homeowners should keep a look-out for the certain signs of termites that can help them identify a termite infestation. Read more about signs of termites in home.

These two diseases present similar symptoms, but with two key differences that you should know.

Where Do Mosquitoes Go During Winter?

Believe or not, mosquitoes don't just die off during the winter. Here's how they survive the cold.

How to Spot Rodents

Rodents can pose serious threats to people and property. Here are 6 common signs of an infestation to look out for.