What Are European Starlings?

European starlings were introduced from Europe into New York in the late 1800s, as part of an attempt to bring animals that were mentioned in Shakespeare's work to America. These birds have grown significantly in population and are nuisance pests in both urban and rural areas, making starling control and management a necessity. European starlings gather in large roosting flocks. Starling noise and droppings are offensive, and they can cause economic grain and feed loss. European starlings are found in southern Alaska, the southern half of Canada, throughout the United States, and into northern Mexico. Keep reading for information on how to get rid of starlings.

Dark with light speckles on feathers; speckles not obvious from a distance; yellow beak except in colder temperatures when it darkens to tan or gray.

Found throughout the United States

Adult European starlings are about 7 ½ to 8 ½ inches long and weigh, on average, about 2 ½ to 3 oz. They are stocky and short-tailed, and their color changes seasonally. In spring and summer, European starlings are black with an iridescent green-purple sheen and yellow bill. In winter, starlings are heavily speckled with white and gold, and their bills are dark in color. They have two short legs, each bearing one rear-facing and three forward-facing toes. Their bodies and wings are covered with feathers. European starlings have a moderately long, horn-shaped bill that lacks teeth. These birds have simple, low-pitched voices, and display a chirpy chatter interspersed with whistles, clicks, and mimicked calls.

How to Get Rid of European Starlings

The first step to get rid of European starlings is for a licensed pest control professional to conduct a site survey, which should include the location of the problem, bird species observed, habitat, recommended control procedures and pricing considerations. Before the problem is addressed, appropriate federal, state and local regulations should be checked. Starlings are not protected by the federal endangered species act or migratory bird statutes, but they may be protected by some states. If the area is a bird sanctuary, then local permits are also required. Once this is determined, then the licensed pest control professional can recommend a proper course of treatment.

There are a handful of European starling control methods that homeowners can follow. Exclusion is one form of European starling control. It involves structural modification (e.g. change ledge angle to 45 degrees) and the installation of plastic netting on portions of buildings, which denies starlings access to roosting sites. Sanitation is also important, as it reduces feeding sites and temporary water sources. Homeowners should make sure to keep gutters clean to prevent water pooling and trash covered in a sealed receptacle. Another method of European starling control and management involves the use of sound devices such as noise-making devices and distress calls, which may be effective in dispersing starlings before they establish territory. 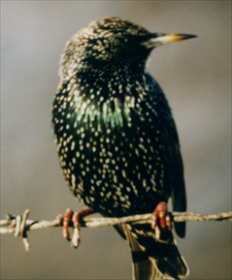 European starling mating occurs in the spring, Females typically lay 4-6 eggs per clutch. The eggs are white, pale bluish or greenish white, and some may have dark spots. Eggs require 11-14 days of incubation. The first flight takes place at around 20 days and young leave the nest shortly thereafter. Until then, both parents help feed the young. There are usually two broods per season.

In the spring, flocks of European starlings may be separated into parents and unpaired first brood. During the summer, parents and first brood birds merge into larger flocks. By autumn, flocks may number in the hundreds to the thousands. Part of these flocks migrate several hundred miles south for the winter. Others remain in the same area year-round and usually roost in protected areas, such as in urban buildings or dense pine stands, during the winter.

At dawn, European starlings fly in flocks as far as 70 miles from their roosting site to a feeding site. When they return to their roosting site around dusk, they first perch on nearby utility lines, trees or buildings. until after sunset. Then, they fly around the roost before settling in for the night. When roosting, European starlings fly as a flock at the first sign of anything unusual, such as a sudden noise or lights. However, they are quick to adjust to city sounds and lights.

European starlings feed on the ground and usually away from their roosting sites. They feed on a variety of substances, including berries, fruits and seeds. During the spring and summer, which is their breeding season, their diet primarily consists of insects and other invertebrates. They will forage in open trash containers and will eat spilled food in parks and picnic sites. In the late summer, European starlings shift their diet to grains, seeds and fruits. Starlings will roost or rest in trees and consume fruit, causing considerable damage in orchards and on small fruit and vegetable farms. Livestock feed makes up a large portion of a European starling’s winter diet. In fact, each bird may consume up to 1 oz. of grain per say.

Starlings can be found in nearly every setting from agriculture to metropolitan areas. European starlings nest in tree cavities, birdhouses and almost any hole in and around a structure. They often displace native hole-nesting birds, such as woodpeckers, bluebirds, flickers, etc. Their nests, which are often reused, consist of grasses, twigs, straw and debris.

European starlings tend to travel in flocks and will be found grazing in short grass. Common in residential settings, starlings will occupy trees or perch on gutters, which may be clogged and filled with water. These clogged gutters provide a much-needed water source for the starlings.

European starlings are of medical concern because more than 25 diseases and ectoparasites have been associated with them, their nests and droppings. Diseases include encephalitis, histoplasmosis, Newcastle disease, chlamydiosis and salmonellosis. The ectoparasites include primarily mite species which can bite humans or infest domestic animals, causing extreme discomfort.

European starling droppings may also cause components of steel buildings to degrade and lead to significant structural damage. In addition, starlings are also known for bird strikes of aircraft, causing at least one crash with fatalities.

Raccoons, Bats, Skunks and Other Wildlife Oh My!

Spooky Pests Give Homeowners a Scare This Fall

Ghoulish Pests Can Be A Nightmare For Homeowners

Here's how to limit your trick-or-treaters to neighborhood children, and not real pests, on Halloween.