It's not uncommon, especially during the winter months, to have an unpleasant encounter with a rodent who has made its way into a home uninvited. What many people do not realize, however, is that these pests can be much more than a nuisance. Rodents such as rats and mice are associated with a number of health risks. In fact, rats and mice are known to spread more than 35 diseases. These diseases can be spread to humans directly through handling of live or dead rodents, contact with rodent feces, urine, or saliva, as well as rodent bites. Diseases carried by rodents can also be spread to humans indirectly through fleas, ticks, or mites that have fed on an infected rodent. 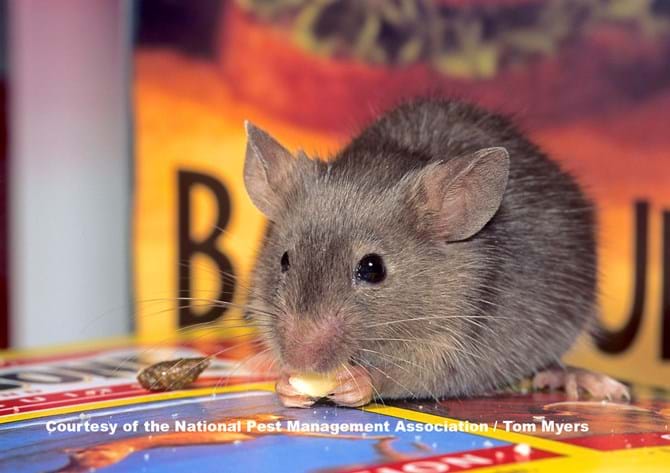 This is especially concerning when the weather cools and rodents start to look for warm places to overwinter - like our homes and even cars. The National Pest Management Association estimates that rodents invade about 21 million homes in the United States every winter, squeezing through spaces as small as a nickel.

Rodent droppings can trigger allergies and transmit food borne illness such as salmonella. Furthermore, mice are capable of dropping up to 25,000 fecal pellets each year, an estimated 70 times each day. Therefore, prevention and prompt removal in case of a rodent infestation is key.

Below is a summary of some of the most common diseases associated with rodents: Hantavirus, lymphocytic choriomeningitis, tularemia and plague.

The Sin Nombre Hantavirus was first recognized in 1993 in the Four Corners region of the southwestern United States (Arizona, Colorado, New Mexico and Utah), but is now found primarily in the western United States. This virus is carried by the deer and white-footed mouse and the cotton and rice rat. Hantavirus includes a group of viruses that can sicken humans and cause kidney, blood or respiratory ailments, as well as fatality in some cases. While it is relatively rare, it is very serious and unpredictable.

People become infected with Hantavirus through several routes, but rodent infestation in and around the home remains the primary risk. The virus is mainly transmitted to people when fresh rodent urine, droppings, or nesting materials are stirred up, become airborne and are breathed in by people. It is carried by several rodent species, mainly deer mice. In addition, if an infected rodent bites someone, the virus may be spread to that person. Researchers also suspect people can become sick if they eat food contaminated by urine, droppings, or saliva from an infected rodent.

Typically, symptoms of Hantavirus develop between one and five weeks after exposure to fresh urine, droppings, or saliva of infected rodents. Infection with Hantavirus can progress to Hantavirus Pulmonary Syndrome (HPS), a severe respiratory disease which can be fatal. Early symptoms include fatigue, fever and muscle aches in the thighs, hips, back, and sometimes shoulders. The infected person may also experience headaches, dizziness, chills, and abdominal complaints, such as nausea, vomiting, diarrhea, and abdominal pain. Four to ten days after the initial phase of illness, the late symptoms of Hantavirus infection develop and HPS may appear. These include coughing and shortness of breath and progression to respiratory distress and failure. HPS has a mortality rate of 38 percent.

There is no specific treatment, cure or vaccine for Hantavirus infection, so rodent prevention and control both inside and outside the home are important. However, if an infection is recognized early and the patient receives acute medical care in an intensive care unit, they may do better. In these care settings, patients may receive mechanical ventilation for respiratory failure and be given oxygen therapy to help them through the period of severe respiratory distress.

Lymphocytic choriomeningitis, or LCM, is a rodent-borne viral infectious disease caused by lymphocytic choriomeningitis virus (LCMV). The primary host of LCMV is the common house mouse. It is estimated that 5 percent of house mice throughout the United States carry LCMV and are able to transmit the virus. Other rodents, such as hamsters, are not the natural carriers, but can become infected with LCMV from wild mice.  Some human infections have resulted from contact with pet rodents.

Transmission of LCMV infections can occur after exposure to fresh urine, droppings, saliva, or nesting materials from infected rodents, such as house mice. A bite from an infected rodent can also put someone at risk of exposure. Infections are more common in the colder months when mice enter homes seeking warmer winter habitats. Transmission may also occur when these materials are directly introduced into broken skin, the nose, the eyes, or the mouth - or  presumably, via the bite of an infected rodent. Person-to-person transmission has not been reported, with the exception of vertical transmission from infected mother to fetus, and rarely, through organ transplantation.

An LCMV infection has two phases; the first phase has non-specific flu-like signs and symptoms such as fever, malaise, lack of appetite, muscle aches, headache, nausea, and vomiting. Less frequent symptoms include sore throat, cough, joint pain, chest pain, testicular pain, and salivary gland pain. The second phase of illness is characterized by neurologic disease. According the CDC, symptoms may include meningitis (fever, headache, stiff neck, etc.), encephalitis (drowsiness, confusion, sensory disturbances, and/or motor abnormalities, such as paralysis), or meningoencephalitis (inflammation of both the brain and meninges).

Most patients who develop neurological disease due to LCMV survive, but some may require hospitalization based on severity. However, as in all infections of the central nervous system, particularly encephalitis, temporary or permanent neurological damage is possible.

Women who become infected with LCM during pregnancy may pass the infection on to the fetus. Infections occurring during the first trimester may result in fetal death and pregnancy termination. Infections in the second and third trimesters may result in serious and permanent birth defects, including vision problems, mental retardation, and hydrocephaly (water on the brain).

However, excluding fetal infection, LCM is usually not fatal with a reported mortality of less than 1 percent. Most cases are self-limited, but often meningitis, encephalitis, or meningoencephalitis require hospitalization and supportive treatment based on severity. Supportive and symptomatic care with anti-inflammatory drugs, such as corticosteroids, may be considered under specific circumstances. To prevent LCM infection, rodent control and prevention is essential.

Plague is infamous for killing millions of people in Europe during the Middle Ages. It is a disease that affects humans and other mammals and is caused by the bacterium, Yersinia pestis. Humans usually get plague after being bitten by an infected rodent flea or by handling an animal infected with plague, such as a rodent. The last urban outbreak of rat-associated plague in the United States occurred in Los Angeles in 1924-1925. Presently, human plague infections continue to occur in rural and semi-rural areas in the western United States.

Plague bacteria are most often transmitted by the bite of an infected flea. If an infected rodent dies, hungry fleas will seek other sources of blood - including humans., although dogs and cats may also bring plague-infected fleas into the home. Flea bite exposure typically results in bubonic plague.

Bubonic plague is characterized by the onset of fever, headache, chills, and weakness and one or more swollen, tender and painful lymph nodes (called buboes). These symptoms typically appear in two to six days after exposure. The buboes generally occur in the lymph nodes closest to where the bacteria entered the human body contain large quantities of multiplying bacteria.

Transmission of plague may also result from contact with contaminated fluid or tissue. For example, a hunter skinning a rabbit or other infected animal without using proper precautions could become infected. This form of exposure most commonly results in bubonic plague or septicemic plague.

Septicemic plague is characterized by life threatening septic shock with fever, chills, extreme weakness, abdominal pain, shock, and possibly bleeding into the skin and other organs. Septicemic plague can occur as the first symptom of plague, or may develop from untreated bubonic plague.

Pneumonic plague typically develops after a person breathes in bacteria-containing droplets. Patients develop fever, headache, weakness, and a rapidly developing pneumonia with shortness of breath, chest pain, and cough. The pneumonia may cause respiratory failure and shock. Pneumonic plague is the most serious form of the disease and is the only form of plague that can be spread from person to person

Plague is a very serious illness, but is treatable with commonly available antibiotics if caught very early on. However, without prompt treatment, the disease can cause serious illness or death. The earlier a patient seeks medical care and receives treatment that is appropriate for plague, the better his or her chances are for a full recovery. Close contacts of patients with pneumonic plague may need to be evaluated and possibly treated as well.

Preventing rodent encounters and contact is key to mitigating the risks of plague, so homeowners should ensure any exterior cracks or crevices are sealed. Additionally, pet owners should practice active flea management to prevent fleas from hitchhiking inside.

Tularemia is a disease of animals and humans caused by the bacterium Francisella tularensis. Rabbits, hares, and other rodents are especially susceptible and often die in large numbers during outbreaks. Humans can become infected through several routes, including tick and deer fly bites; skin contact with infected animals; ingestion of contaminated water; and through laboratory exposure or inhalation of contaminated dusts or aerosols.

Tularemia is widely distributed and found in many parts of the United States. Naturally occurring infections have been reported from all states except Hawaii.

The signs and symptoms of tularemia vary depending on how the bacteria enters the body. All forms are accompanied by fever, which can be as high as 104 °F. Although tularemia can be life-threatening, most infections can be treated successfully with antibiotics.

The most common form of tularemia is ulceroglandular disease and usually occurs following a tick or deer fly bite or after handling an infected animal. A skin ulcer appears at the site where the organism entered the body and is accompanied by swelling of regional lymph glands, usually in the armpit or groin.

Oculoglandular disease occurs when the bacteria enter through the eye. This can occur when a person is butchering an infected animal and touches or accidentally has some of the airborne particles enter their eyes. Symptoms include irritation and inflammation of eye and swelling of lymph glands in front of the ear.

Oropharyngeal infection results from eating or drinking contaminated food or water. Patients with orophyangeal tularemia may have sore throat, mouth ulcers, tonsillitis, and swelling of lymph glands in the neck.

The most serious form of tularemia is oneumonic infection. Symptoms include cough, chest pain, and difficulty breathing. This form results from breathing dusts or aerosols containing the organism. It can also occur when other forms of tularemia (e.g. ulceroglandular) are left untreated and the bacteria spread through the bloodstream to the lungs.

NPMA encourages the public to take precautionary steps to keep rodents out of homes and away from camp sites and use repellent to prevent tick and flea bites. Check out this article on 10 Easy Tips to Prevent Mice and Rats Inside the Home for more information on rodent control.