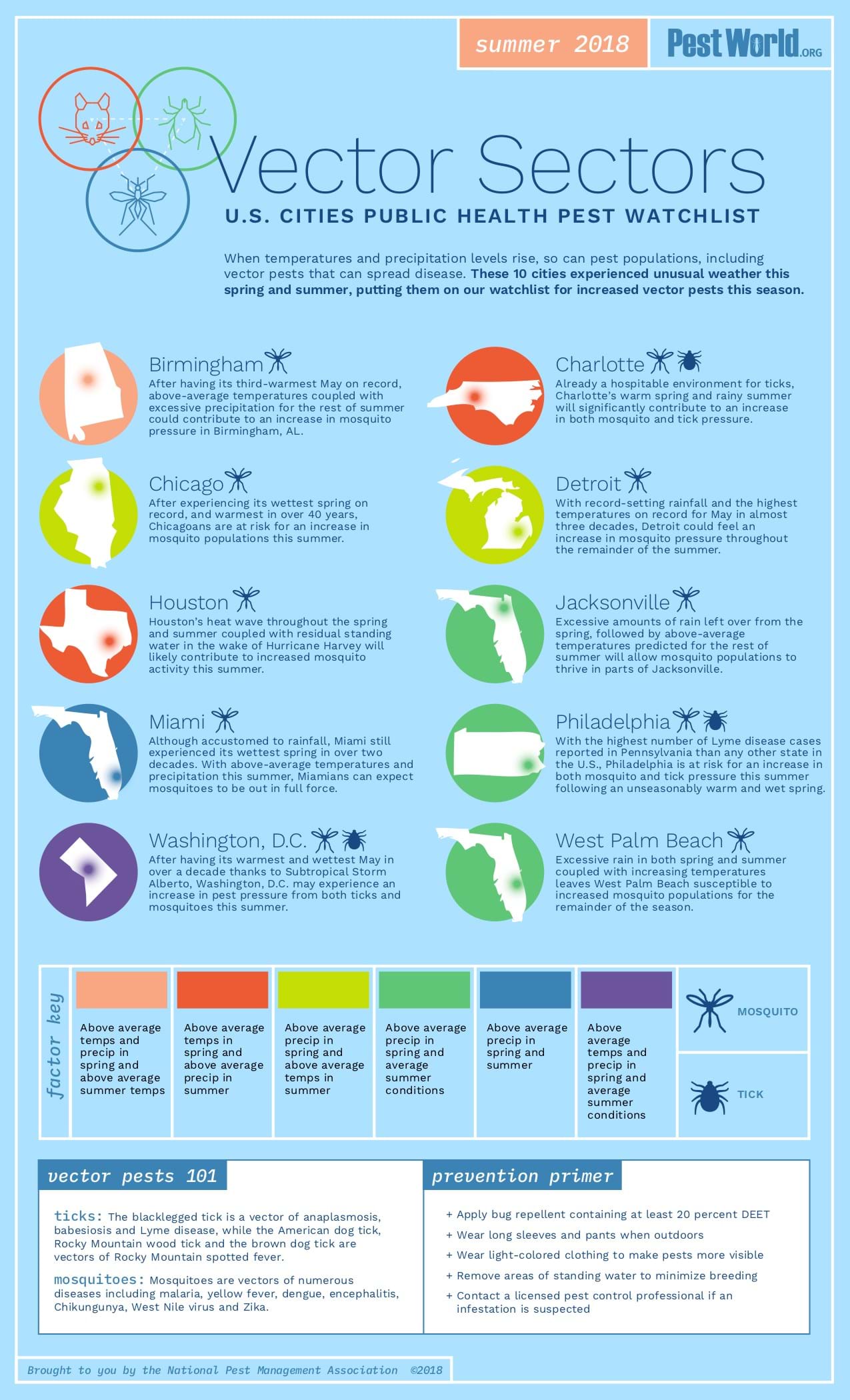 FAIRFAX, VA (August 13, 2018) — The National Pest Management Association (NPMA) today released a new Vector Sectors™ list of the top 10 U.S. cities with the greatest risk for increased pest pressure from vector pests, including ticks and mosquitoes. As vectors of disease, these pests are able to transmit pathogens such as Lyme disease and West Nile virus to humans through their bites, making awareness and prevention paramount to protecting public health.

“We’ve identified 10 cities with established pest populations that also experienced record-setting rainfall and heat this spring and summer, as these favorable conditions will put them at an increased risk for vector pest pressure for the remainder of the season,” said Cindy Mannes, vice president of public affairs for NPMA. “Both ticks and mosquitoes thrive in areas with warmer temperatures and excessive rainfall, as standing water allows for more opportunities to breed and increase population numbers.”

Birmingham: After having its third-warmest May on record, above-average temperatures coupled with excessive precipitation for the rest of summer could contribute to an increase in mosquito pressure in Birmingham, AL.

Charlotte: Already a hospitable environment for ticks, Charlotte’s warm spring and rainy summer will significantly contribute to an increase in both mosquito and tick pressure.

Chicago: After experiencing its wettest spring on record, and warmest in over 40 years, Chicagoans are at risk for an increase in mosquito populations this summer.

Detroit: With record-setting rainfall and the highest temperatures on record for May in almost three decades, Detroit could feel an increase in mosquito pressure throughout the remainder of the season.

Houston: Houston’s heat wave throughout the spring and summer coupled with residual standing water left in the wake of Hurricane Harvey will likely contribute to increased mosquito activity this summer.

Jacksonville: Excessive amounts of rain left over from the spring followed by above-average temperatures predicted for the rest of summer will allow mosquito populations to thrive in parts of Jacksonville.

Miami: Although accustomed to rainfall, Miami still experienced its wettest spring in more than two decades. With above-average temperatures and precipitation this summer, Miamians can expect mosquitoes to be out in full force.

Philadelphia: With the highest number of Lyme disease cases reported in Pennsylvania than any other state in the U.S., Philadelphia is at risk for an increase in both mosquito and tick pressure this summer following an unseasonably warm and wet spring.

Washington, D.C.: After having its warmest and wettest May in over a decade thanks to Subtropical Storm Alberto, Washington, D.C. is expected to experience an increase in pest pressure from both ticks and mosquitoes this summer.

West Palm Beach: Excessive rain in both spring and summer coupled with increasing temperatures leaves West Palm Beach susceptible to increased mosquito populations for the remainder of the season

Regardless of where you live, all U.S. residents should take extra precautions this summer to protect against biting vector pests. Avoid being outside during dawn and dusk, as these are peak activity times for mosquitoes which can transmit Dengue fever, West Nile virus and chikungunya. Choose an insect repellent containing at least 20 percent DEET, picaridin, oil of lemon eucalyptus or IR3535, and wear long sleeves and pants in light colors to limit exposure. Avoid walking in tall grass where blacklegged ticks, American dog ticks, Rocky Mountain wood ticks and brown dog ticks are commonly found. Ticks can transmit Lyme disease, babesiosis and Rocky Mountain spotted fever, so be sure to conduct daily checks after spending time outdoors, as prompt removal is key to reducing the risk of disease transmission.

For more information on NPMA’s Vector Sectors or to learn more about protecting against pests, visit PestWorld.org.