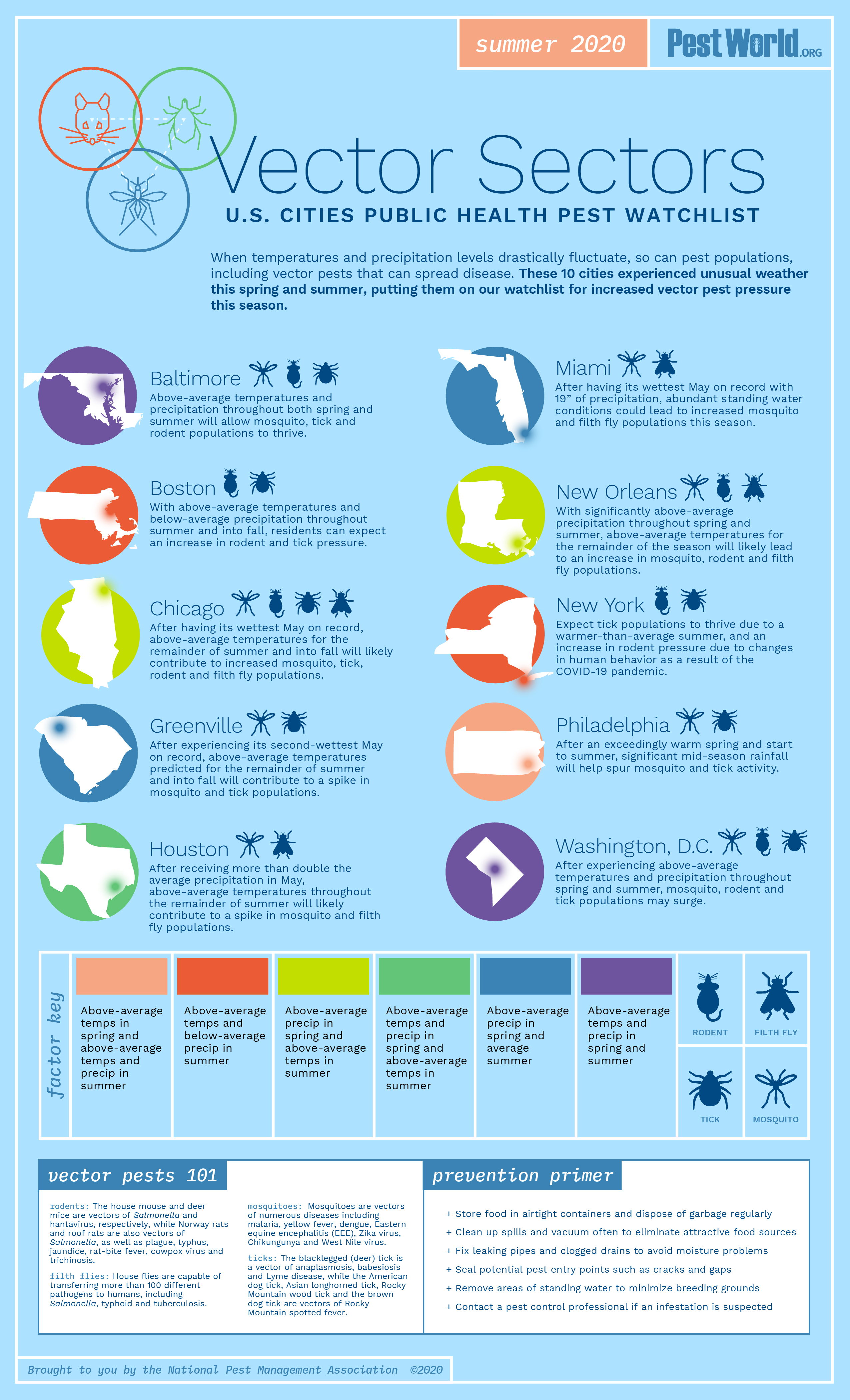 FAIRFAX, VA (August 18, 2020) — The National Pest Management Association (NPMA) today released its bi-annual Vector Sectors™ list of the top 10 U.S. cities with the greatest risk for increased pest pressure from vector pests for the remainder of summer and into fall. Excessive rainfall in the spring coupled with above-average temperatures predicted across most of the country will create the perfect conditions for vector pests such as mosquitoes, ticks, rodents and filth flies to thrive.

“On top of the COVID-19 pandemic affecting rodent behavior due to a lack of foot traffic and diminished food supply, many cities also experienced record-breaking rainfall this spring, helping to spur early mosquito, tick and filth fly activity,” said Jim Fredericks, Ph.D., chief entomologist for the NPMA. “While these pests are not known to transmit COVID-19, they are able to transmit many other serious diseases to humans through their bites, most notably West Nile virus and Lyme disease, making vigilance key as Americans spend more time outdoors in response to the pandemic.”

Despite their inability to transmit COVID-19 directly to humans, the diseases vector pests can spread often have comparable symptoms, causing confusion and delays in diagnosis. One such example is Lyme disease which can be transmitted through the bite of an infected blacklegged (deer) tick. “Knowing the signs and symptoms of Lyme disease is crucial to ensuring it is treated promptly,” said Jorge Parada, M.D., M.P.H., F.A.C.P., F.I.D.S.A., F.S.H.E.A, medical advisor for the National Pest Management Association. “While it shares many similar symptoms with COVID-19, such as headaches, muscle aches and fever, the most discernable difference is the hallmark bulls-eye rash that often presents with Lyme disease. If you think you may have contracted Lyme disease, seek medical attention immediately.”

Baltimore: Above-average temperatures and precipitation throughout both spring and summer will allow mosquito, tick and rodent populations to thrive.

Boston: With above-average temperatures and below-average precipitation throughout summer and into fall, residents can expect an increase in rodent and tick pressure.

Chicago: After having its wettest May on record, above-average temperatures for the remainder of summer and into fall will likely contribute to increased mosquito, tick, rodent and filth fly populations.

Greenville: After experiencing its second-wettest May on record, above-average temperatures predicted for the remainder of summer and into fall will contribute to a spike in mosquito and tick populations.

Houston: After receiving more than double the average precipitation in May, above-average temperatures throughout the remainder of summer will likely contribute to a spike in mosquito and filth fly populations.

Miami: After having its wettest May on record with 19” of precipitation, abundant standing water conditions could lead to increased mosquito and filth fly populations this season.

New Orleans: With significantly above-average precipitation throughout spring and summer, above-average temperatures for the remainder of the season will likely lead to an increase in mosquito, rodent and filth fly populations.

New York: Expect tick populations to thrive due to a warmer-than-average summer, and an increase in rodent pressure due to changes in human behavior as a result of the COVID-19 pandemic.

Philadelphia: After an exceedingly warm spring and start to summer, significant mid-season rainfall will help spur mosquito and tick activity.

Washington, D.C.: After experiencing above-average temperatures and precipitation throughout spring and summer, mosquito, rodent and tick populations may surge.

To make your home less attractive to pests, the NPMA recommends storing food in airtight containers and cleaning up crumbs and spills immediately to eliminate food sources. Outside, ensure all garbage receptacles are sealed, breakdown and dispose of delivery boxes, and routinely remove any sources of standing water around the home to prevent breeding grounds from forming.

Wear long pants and sleeves when spending time outdoors to limit exposure to ticks and mosquitoes, and be sure to properly apply bug repellent containing at least 20 percent DEET. Upon returning indoors, be sure to do a thorough skin and clothing check to ensure no ticks were brought inside, making sure to check pets as well.

If insects and rodents do become a problem, contact a licensed pest control professional to help properly identify and treat infestations.

For more information on NPMA’s Vector Sectors list or to learn more about protecting against pests, visit PestWorld.org.