Eek! New Survey Finds More Than One-Third of American Homeowners Have Spotted a Rodent in Their Home in the Past Year

FAIRFAX, VA (October 23, 2017) – Cooler weather has arrived and more time is spent indoors, which means the odds of a rodent encounter are pretty great. Rodent Awareness Week is October 22-28, 2017 and the National Pest Management Association is sharing some eye-opening stats from its latest survey of more than 1,000 American homeowners to learn more about their experiences with rodents, such as mice and rats. The survey, conducted online by Harris Poll, found that 37 percent of homeowners have seen a rodent in their home in the past year, compared to 30 percent in 2013* who have ever had a rodent problem in their home. It also found that only 17 percent of homeowners would be most concerned about a rodent bringing diseases into the home, if they were to see one indoors.

“We were surprised to see some of the nonchalance in regard to rodent sightings inside the home,” said Cindy Mannes, vice president of public affairs for NPMA. “Rodent infestations are no joke, as mice and rats can contaminate food, spread diseases, and trigger asthma and allergy symptoms through a buildup of their droppings. It’s critical that homeowners understand the health hazards that come along with finding a rodent scurrying across the kitchen floor — especially because where there is one, there are certainly more.”

Rodents are also capable of damaging structures by chewing through drywall insulation and even electrical wires, increasing the risk of fire. They are also known to bring fleas and mites indoors, posing a threat to family pets.

Below are additional highlights from NPMA’s September 2017 survey: 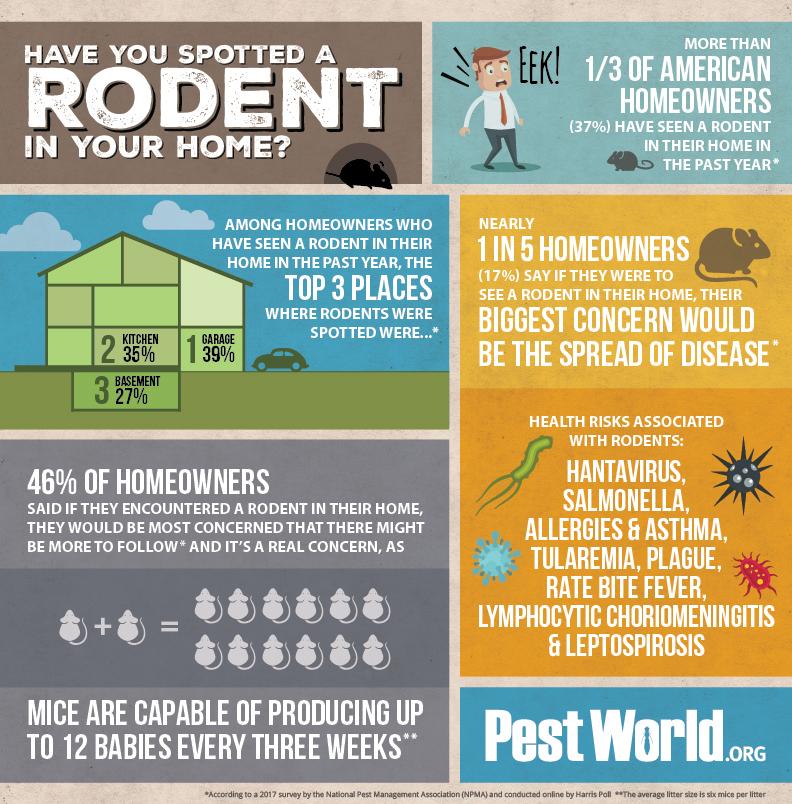 This survey was conducted online within the United States by Harris Poll on behalf of NPMA from September 19-21, 2017 among 2,122 U.S. adults ages 18 and older, among whom 1,379 own a home (i.e., homeowners). This online survey is not based on a probability sample and therefore no estimate of theoretical sampling error can be calculated. For complete survey methodology, including weighting variables and additional subgroup sample sizes, please contact Danielle Corrato at dcorrato@vaultcommunications.com.

*The survey was conducted online with the United States by Harris Interactive on behalf of the NPMA, from November 22-26, 2013, among 2,033 adults ages 18 and older.

The NPMA, a non-profit organization with more than 6,000 members, was established in 1933 to support the pest management industry's commitment to the protection of public health, food and property from the diseases and dangers of pests. For more information, visit PestWorld.org or follow @PestWorld on Facebook, Twitter, Pinterest and YouTube.