FAIRFAX, VA (September 27, 2018) – The National Pest Management Association (NPMA) today released its bi-annual Bug Barometer®, a seasonal forecast of the pest pressure and activity Americans can expect to see in their respective regions of the country based on weather patterns and long-term predictions, as well as pest biological behaviors. According to the group’s team of entomologists, erratic weather patterns and record-breaking rainfall are expected to cause an increase in pest pressure across the continental U.S. this fall and winter.

“This summer brought a whole host of extreme weather conditions that can affect pest pressure, including record rainfall in some parts of the country, and drought in others,” said Jim Fredericks, Ph.D., chief entomologist for the NPMA. “With most of the country still damp from summer and fall, and winter forecasts predicting even more precipitation, expect an increase in activity from moisture-loving pests such as mosquitoes, termites, cockroaches, stink bugs and rodents.”

Elsewhere, drought conditions across the southwestern part of the country are expected to contribute to an influx of pests. “Rodent populations will become public enemy number one as they seek shelter indoors and are in search of steady sources of food and water,” added Fredericks.

Based on this analysis, the National Pest Management Association’s Fall/Winter Bug Barometer is forecasting a spike in major pest populations across the entire U.S. this season: 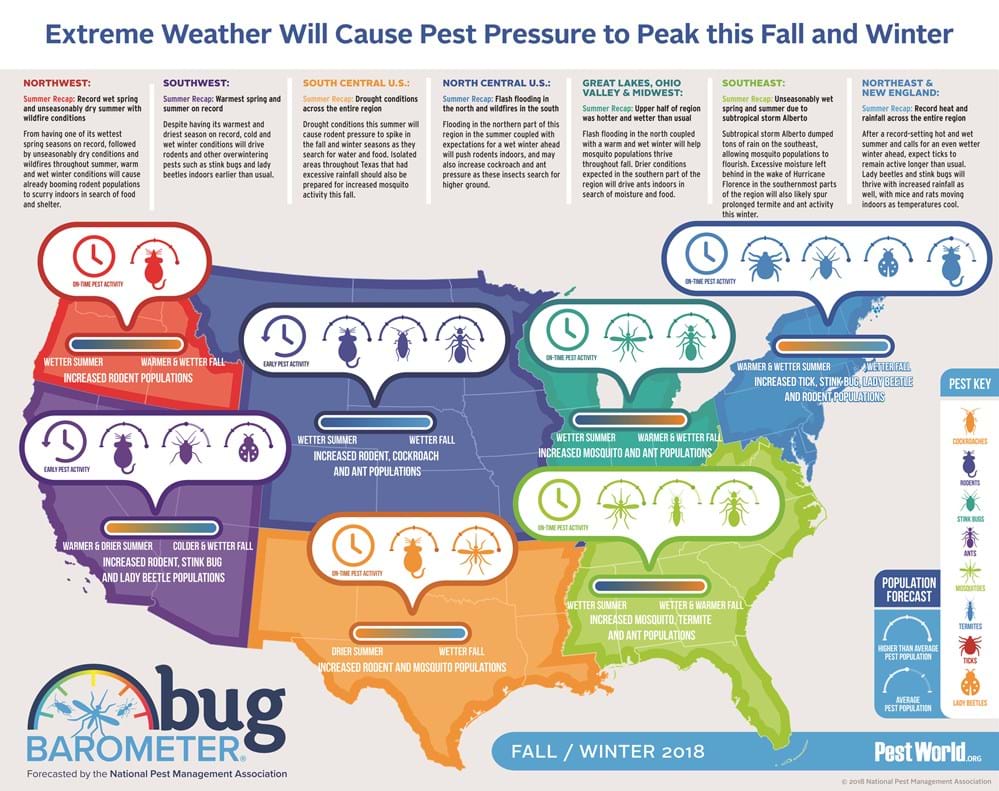 After a record-setting hot and wet summer and calls for an even wetter winter ahead, expect ticks to remain active longer than usual. Lady beetles and stink bugs will thrive with increased rainfall as well, with mice and rats moving indoors as temperatures cool.

Flash flooding in the north coupled with a warm and wet winter will help mosquito populations thrive throughout fall. Drier conditions expected in the southern part of the region will drive ants indoors in search of moisture and food.

Subtropical storm Alberto dumped tons of rain on the southeast, allowing mosquito populations to flourish. Excessive moisture left behind in the wake of Hurricane Florence in the southernmost parts of the region will also likely spur prolonged termite and ant activity this winter.

Flooding in the northern part of this region in the summer coupled with expectations for a wet winter ahead will push rodents indoors, and may also increase cockroach and ant pressure as these insects search for higher ground.

Drought conditions this summer will cause rodent pressure to spike in the fall and winter seasons as they search for water and food. Isolated areas throughout Texas that had excessive rainfall should also be prepared for increased mosquito activity this fall.

From having one of its wettest spring seasons on record, followed by unseasonably dry conditions and wildfires throughout summer, warm and wet winter conditions will cause already booming rodent populations to scurry indoors in search of food and shelter.

Despite having its warmest and driest season on record, cold and wet winter conditions will drive rodents and other overwintering pests such as stink bugs and lady beetles indoors earlier than usual.

For more information on NPMA’s Fall/Winter Bug Barometer or to learn more about protecting against common household pests, visit PestWorld.org.