Powassan (POW) virus is a Flavivirus related to West Nile, St. Louis encephalitis, and other Tick-borne encephalitis viruses. The virus is named after Powassan, Ontario, where the first recognized case of disease was discovered in 1958.

Humans become infected with Powassan virus from the bite of an infected tick. Fortunately, Powassan virus is only rarely transmitted to humans. Typically infection is transmitted in a cycle to and from ticks and small mammals such as woodchucks, skunks, squirrels and white footed mice.

Powassan virus is most common in eastern Canada and the north central United States (fig 1). Approximately 60 human cases of the most severe form of infection, neuroinvasive Powassan virus disease, were reported in the United States over the past 10 years, where most cases have occurred in the Northeast and Great Lakes region (Fig 1). However, these numbers may be misleading. Serologic surveys have found an antibody prevalence of 1 to 4 percent, indicating that asymptomatic infection is common. 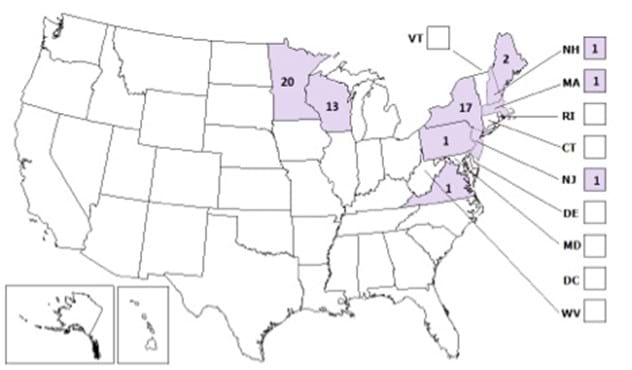 Unfortunately, it appears that Powassan virus is either becoming more common, or it is more commonly being diagnosed (Fig 2). 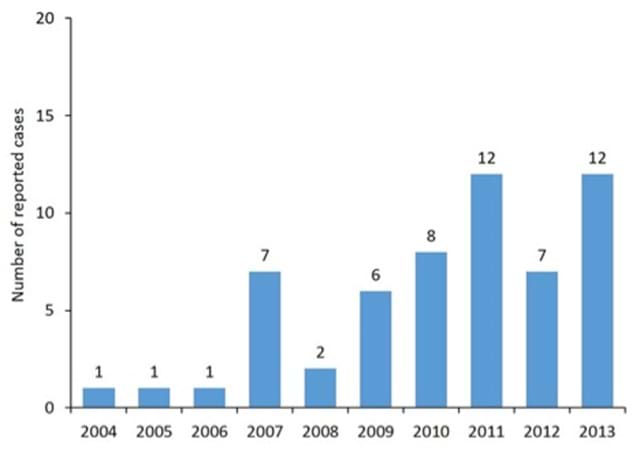 Like most tick-borne diseases, infection mostly occurs during the warm summer months from June to September.

Powassan encephalitis generally shows first symptoms after 1-3 weeks. Typically, people do not recall the tick bite. The tick is small and easy to miss and, unlike Lyme disease where the tick needs to feed for 24-48 hours before transmitting infection, Powassan virus may be transmitted in as little as 15 minutes of attachment.

Signs and symptoms of infection can include fever, headache, vomiting, generalized weakness, confusion, seizures, and memory loss. The Powassan virus infects the central nervous system and can cause encephalitis (inflammation of the brain) and meningitis (inflammation of the membranes that surround the brain and spinal cord). This manifests itself as a painful or stiff neck, altered mental status, confusion, seizures, aphasia (inability to speak), tingling and numbness, movement disorders, or cranial nerve palsies (paralysis of the muscles of the face and eyes). Unfortunately, 10-15% of Powassan virus encephalitis cases are fatal and long-term neurologic problems are common. In persons with full-blown Powassan infection, approximately half of survivors have permanent neurological symptoms, such as recurrent headaches, paralysis, muscle wasting and memory problems.

Treatment and Prevention of Powassan Virus

There is no specific treatment, but people with severe cases of Powassan virus often need to be hospitalized to receive respiratory support, intravenous fluids, or medications to reduce swelling in the brain.

Because there is no vaccine or specific therapy for Powassan encephalitis, the best way to combat the infection is prevention. Of course, the best means of prevention is protection from tick bite. This includes avoiding walking through tall grass and vegetation, wearing light-colored clothing with long sleeves and pants tucked into socks or boots, as well as clearing brushy areas from around your home. Insect repellants are effective against ticks and are recommended. The best chemical protection against ticks consists of permethrin-treated clothing and gear, combined with DEET applied to exposed skin. It is also important to remove ticks before they attach or as soon after attachment as possible.

Remember to check family pets for ticks to help prevent ticks from entering the home. Environmental controls to reduce human contact with small and medium-sized mammals should reduce risk for exposure to Powassan virus-infected ticks. Persons should keep areas adjacent to their home clear of brush, weeds, trash, and other elements that could support small and medium-sized mammals. When removing rodent nests, avoid direct contact with nesting materials and use sealed plastic bags for disposal and to prevent direct contact with ticks. To further limit your risk, consider contacting a pest control professional to address removing rodent and other mammals from your property.