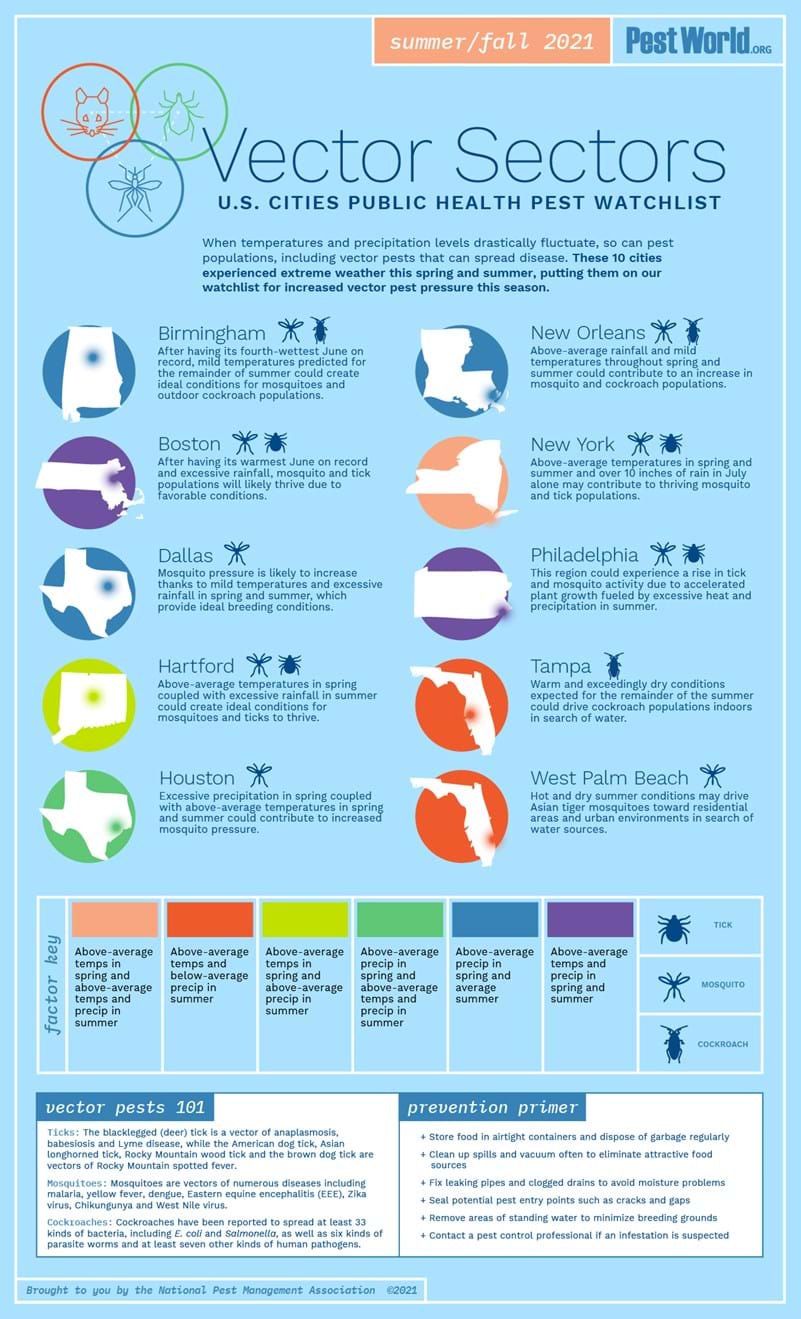 The National Pest Management Association (NPMA) today released its bi-annual Vector Sectors™ list of the top 10 U.S. cities with the greatest risk for increased pest pressure from vector pests for the remainder of summer and into fall. After a soaking spring and mild conditions predicted for the remainder of summer across much of the continental U.S., pests such as mosquitoes, ticks, and cockroaches are likely to thrive.

“Disease-spreading pests such as ticks, mosquitoes and cockroaches love water, and mother nature sure dumped her fair share across much of the country this spring,” said Jim Fredericks, Ph.D., chief entomologist for the NPMA. “As Americans head outdoors to take advantage of mild summer conditions for the remainder of the season, it’s imperative that pest prevention remain top-of-mind. With the CDC recently increasing their annual Lyme disease estimate to 476,000 new cases in the U.S. each year, knowledge about the conditions that are favorable to ticks and other vector pests can help greatly reduce exposure.”

Birmingham: After having its fourth-wettest June on record, mild temperatures predicted for the remainder of summer could create ideal conditions for mosquitoes and outdoor cockroach populations.

Boston: After having its warmest June on record and excessive rainfall, mosquito and tick populations will likely thrive due to favorable conditions.

Dallas: Mosquito pressure is likely to increase thanks to mild temperatures and excessive rainfall in spring and summer, which provide ideal breeding conditions.

Hartford: Above-average temperatures in spring coupled with excessive rainfall in summer could create ideal conditions for mosquitoes and ticks to thrive.

Houston: Excessive precipitation in spring coupled with above-average temperatures in spring and summer could contribute to increased mosquito pressure.

New Orleans: Above-average rainfall and mild temperatures throughout spring and summer could contribute to an increase in mosquito and cockroach populations.

New York: Above-average temperatures in spring and summer and over 10 inches of rain in July alone may contribute to thriving mosquito and tick populations.

Philadelphia: This region could experience a rise in tick and mosquito activity due to accelerated plant growth fueled by excessive heat and precipitation in summer.

Tampa: Warm and exceedingly dry conditions expected for the remainder of the summer could drive cockroach populations indoors in search of water.

When spending time outdoors, the NPMA recommends wearing long pants and sleeves, when appropriate, to limit exposure to ticks and mosquitoes, and be sure to properly apply bug repellent containing at least 20 percent DEET. Make sure to also conduct a thorough skin and clothing check on yourself, your loved ones and pets before returning indoors to prevent bringing ticks inside.

For indoor pest prevention, be sure to store food in airtight containers and clean up crumbs and spills immediately to eliminate food sources. Fix any leaking pipes or clogged drains and seal all potential entry points, including gaps and cracks in the foundation. To prevent mosquito breeding grounds from forming on your property, empty any sources of standing water, including bird baths, inflatable pools and overturned toys, as mosquitoes only need half an inch of water to breed.

For more information on NPMA’s Vector Sectors list, or to learn more about protecting against pests, visit PestWorld.org.