FAIRFAX, Va. (April 3, 2017) – The National Pest Management Association (NPMA) today released its bi-annual Bug Barometer, a guide depicting expected pest activity throughout the U.S. for the upcoming warmer seasons. According to the Bug Barometer, after exceptionally milder winter temperatures across much of the country, and periodic heavy precipitation or moisture in most areas, Americans can collectively expect a very buggy spring and summer. 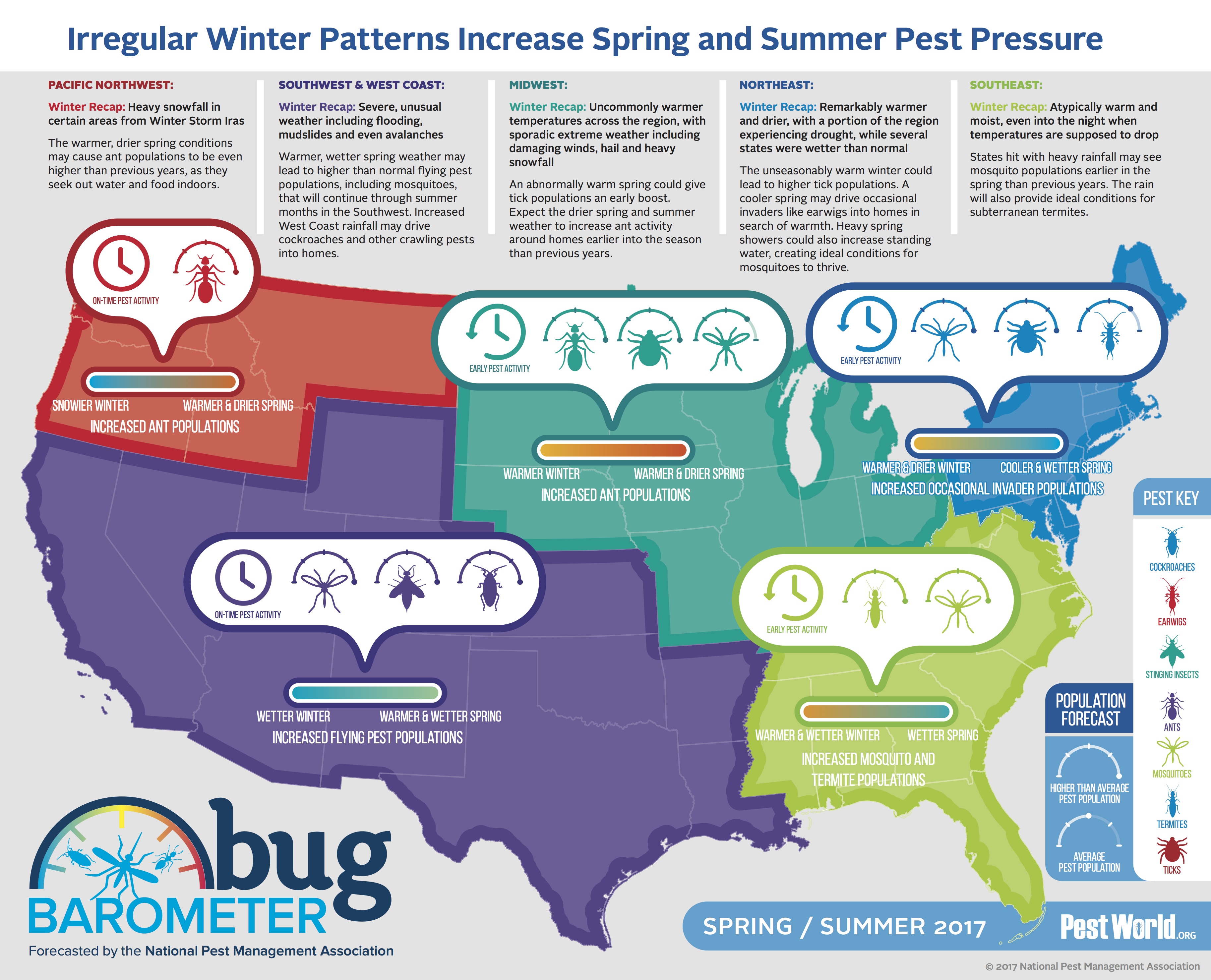 “Ticks, mosquitoes, ants and other pests will be out in full force this spring and summer,” said Jim Fredericks, Ph.D., chief entomologist and vice president of technical and regulatory affairs for the NPMA. “With growing concern over infectious diseases spread by pests such as West Nile virus, Zika virus, Lyme disease and more, diligent prevention and awareness is especially necessary given the high pest populations that are projected for the warmer seasons ahead.”

Americans can look back on the following winter weather patterns, and learn anticipated pest activity for their respective regions across the U.S., according to the NPMA’s Bug Barometer:

Pacific Northwest: In winter, the region — including parts of the Rocky Mountains — experienced heavy snowfall in certain areas from Winter Storm Iras. Yet, the upcoming warmer and drier spring conditions may cause ant populations to be even higher than previous years, as they seek out sources of water and food indoors.

Southwest & West Coast: Winter brought severe and unusual weather, including extreme flooding, resulting in mudslides and even avalanches. The subsequent warmer, wetter spring weather may lead to higher than normal flying pest populations, including mosquitoes and stinging insects, that will continue through the summer months in the Southwest. Increased West Coast rainfall may drive cockroaches and other crawling pests into homes.

Midwest: The area had uncommonly warmer temperatures across the region, with sporadic extreme weather including damaging winds, hail and heavy snowfall. This, followed by an abnormally warm spring, is expected to give tick populations an early boost. Also expect the drier spring and summer weather to increase ant activity around homes earlier in the season than previous years. Likewise, warmer weather will cause mosquito eggs to hatch sooner.

Northeast: The winter was remarkably warmer and drier, and a portion of the region experienced drought, although several states were wetter than normal. Higher tick populations may result from the unseasonably warm winter. A cooler spring may drive occasional invaders like earwigs into homes in search of warmth. Heavy spring showers could also increase standing water, creating ideal conditions for mosquitoes to thrive.

Southeast: The region was atypically warm and moist in the winter months, even into the night when temperatures are supposed to drop. States hit with heavy rainfall may see mosquito populations emerge earlier in the spring than previous years. The rain will also provide ideal conditions for subterranean termites.

To develop the Bug Barometer, the NPMA’s staff entomologists combine pests’ biological behaviors with careful examination of previous weather conditions and forecasted weather patterns to predict how pest pressure will be impacted across the country.

For more information on NPMA’s Bug Barometer or to learn more about protecting against household pests, visit PestWorld.org.