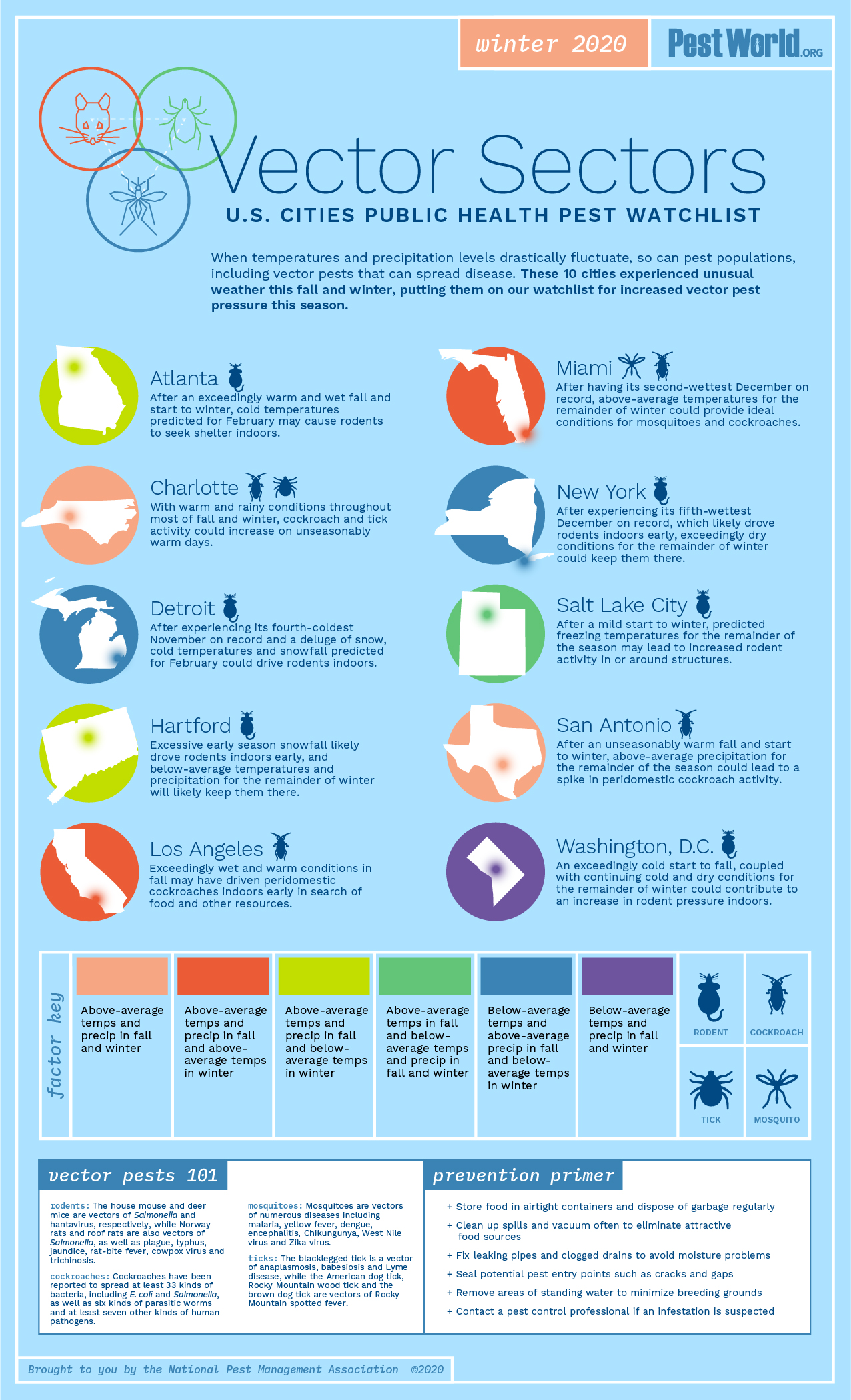 FAIRFAX, VA (February 12, 2020) — The National Pest Management Association (NPMA) today released its bi-annual Vector Sectors™ list of the top 10 U.S. cities with the greatest risk for increased pest pressure from vector pests for the remainder of winter and into spring. While rodent and cockroach pressure typically spikes this time of year, unseasonably warm and wet conditions contributed to uncommon spikes in mosquito and tick pressure as well, prompting experts to offer a word of caution for the season ahead.

“This winter, if you can call it winter, has been so erratic that we’re seeing increases in pest  pressure from populations otherwise dormant this time of year. Not only did early season snowfall and cold temperatures across the country drive rodents and cockroaches indoors early in search of food and shelter, but record-high temperatures nationwide in December through January allowed pest populations to sustain activity well past their normal seasonal decline,” said Jim Fredericks, Ph.D., chief entomologist for the NPMA. “This extended period of warm, wet weather allowed more pests to survive the winter, setting the stage for increased vector pest pressure going into spring.”

Atlanta: After an exceedingly warm and wet fall and start to winter, cold temperatures predicted for February may cause rodents to seek shelter indoors.

Charlotte: With warm and rainy conditions throughout most of fall and winter, cockroach and tick activity could increase on unseasonably warm days.

Detroit: After experiencing its fourth-coldest November on record and a deluge of snow, cold temperatures and snowfall predicted for February could drive rodents indoors.

Hartford: Excessive early season snowfall likely drove rodents indoors early, and below-average temperatures and precipitation for the remainder of winter will likely keep them there.

Los Angeles: Exceedingly wet and warm conditions in fall may have driven peridomestic cockroaches indoors early in search of food and other resources.

Miami: After having its second-wettest December on record, above-average temperatures for the remainder of winter could provide ideal conditions for mosquitoes and cockroaches.

New York: After experiencing its fifth-wettest December on record, which likely drove rodents indoors early, exceedingly dry conditions for the remainder of winter could keep them there.

Salt Lake City: After a mild start to winter, predicted freezing temperatures for the remainder of the season may lead to increased rodent activity in or around structures.

San Antonio: After an unseasonably warm fall and start to winter, above-average precipitation for the remainder of the season could lead to a spike in peridomestic cockroach activity.

Washington, D.C.: An exceedingly cold start to fall, coupled with continuing cold and dry conditions for the remainder of winter could contribute to an increase in rodent pressure indoors.

To limit encounters with pests, the NPMA recommends removing sources of standing water in and around the home. This includes fixing leaky pipes and clogged drains, and sealing entry points such as cracks or gaps where plumbing pipes and utility lines enter the structure. Inside, be sure to store food in airtight containers, clean up crumbs and spills and dispose of garbage regularly to eliminate sources of food.

When spending time outdoors, check clothing, skin and pets for ticks. Wear long pants and sleeves when possible, along with bug repellent containing at least 20 percent DEET to limit exposure to mosquitoes.

If pests become a problem, be sure to contact a licensed pest control professional to help properly identify and treat infestations.

For more information on NPMA’s Vector Sectors list or to learn more about protecting against common household pests, visit PestWorld.org.

*January 2020 online engagement findings are a result of a recent online research study conducted between January 2018 and January 2020 by Advanced Symbolics Inc. using a representative sample of 274,500 Americans.