Buckle Up: Pest Pressure Expected to Soar Amid Turbulent Weather This Fall and Winter 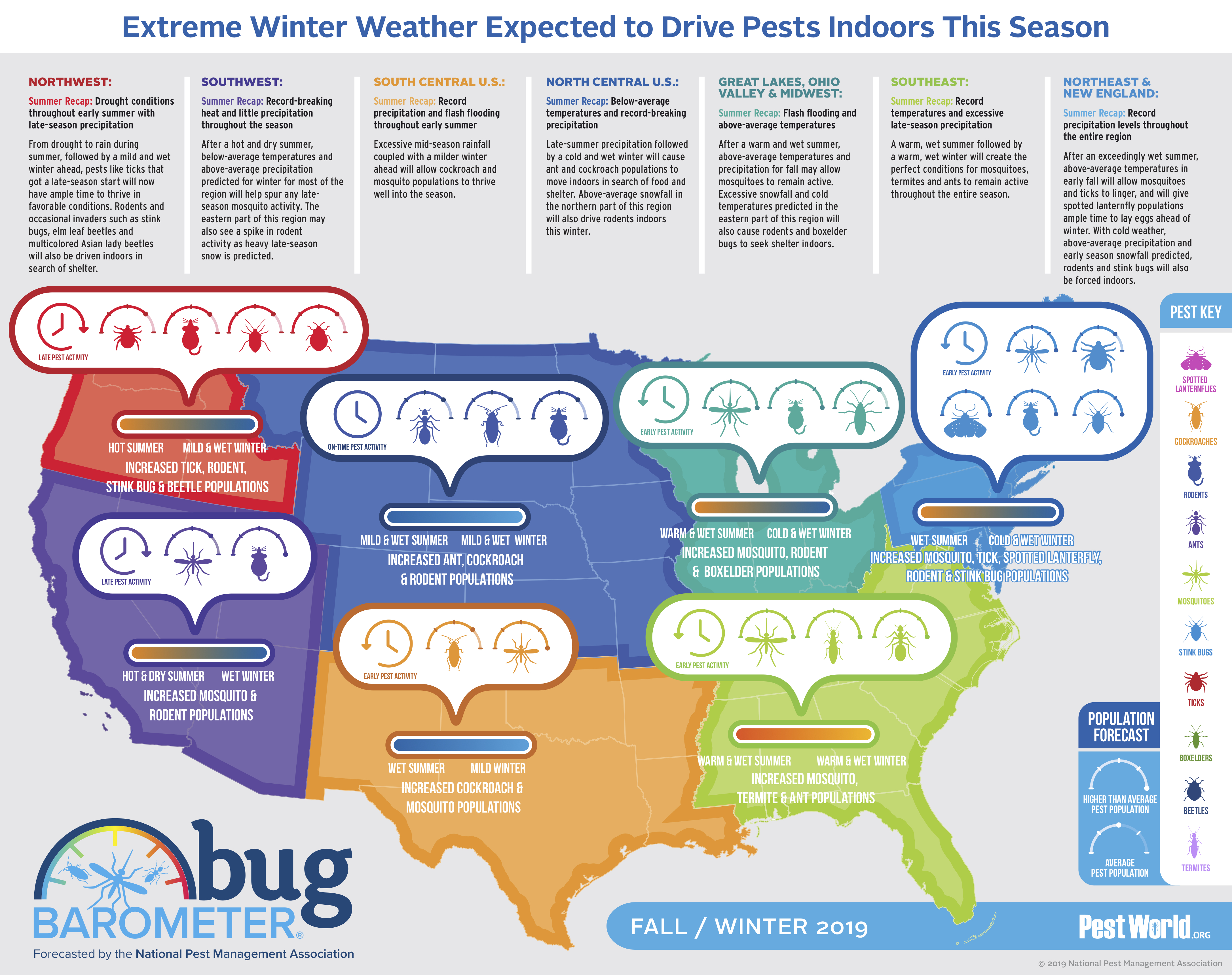 FAIRFAX, VA (September 24, 2019) – The National Pest Management Association (NPMA) today released its bi-annual Bug Barometer®, a seasonal projection of the pest pressure and activity Americans can expect to see in their respective regions of the country based on weather patterns and long-term forecasts, as well as pest biological behaviors. According to the group’s team of entomologists, pest pressure will be heightened this fall and winter as extreme fluctuations in temperature and precipitation across the U.S. are expected throughout the season.

“With most of the country still drying out from a hot, soggy summer, extreme late-season winter conditions predicted will have rodents and cockroaches fleeing indoors in record numbers,” said Jim Fredericks, Ph.D., chief entomologist for the NPMA. “Although most of the country won’t be battered by Old Man Winter until after the holiday season, pests like mosquitoes, ticks, termites and cockroaches that enjoyed this summer’s exceedingly wet conditions will have a few extra months to remain active before conditions turn blustery thanks to the mild, wet fall ahead.”

Residents across the entire country will also feel extreme pressure from occasional invaders both old and new. “Usual suspects like stink bugs, boxelders and beetles will have ample time to multiply this fall before heading indoors en masse, but spotted lanternfly populations, which have boomed since they were first spotted in Pennsylvania in 2014, could become even more problematic for the Northeast as  their mating season is extended thanks to favorable fall conditions,” added Fredericks.

Based on this analysis, the National Pest Management Association’s Fall/Winter Bug Barometer is forecasting a spike in major pest populations across the entire U.S. this season:

After an exceedingly wet summer, above-average temperatures in early fall will allow mosquitoes and ticks to linger, and will give spotted lanternfly populations ample time to lay eggs ahead of winter. With cold weather, above-average precipitation and early season snowfall predicted, rodents and stink bugs will also be forced indoors.

A warm, wet summer followed by a warm, wet winter will create the perfect conditions for mosquitoes, termites and ants to remain active throughout the entire season.

After a warm and wet summer, above-average temperatures and precipitation for fall may allow mosquitoes to remain active. Excessive snowfall and cold temperatures predicted in the eastern part of this region will also cause rodents and boxelder bugs to seek shelter indoors.

Late-summer precipitation followed by a cold and wet winter will cause ant and cockroach populations to move indoors in search of food and shelter. Above-average snowfall in the northern part of this region will also drive rodents indoors this winter.

Excessive mid-season rainfall coupled with a milder winter ahead will allow cockroach and mosquito populations to thrive well into the season.

After a hot and dry summer, below-average temperatures and above-average precipitation predicted for winter for most of the region will help spur any late-season mosquito activity. The eastern part of this region may also see a spike in rodent activity as heavy late-season snow is predicted.

From drought to rain during summer, followed by a mild and wet winter ahead, pests like ticks that got a late-season start will now have ample time to thrive in favorable conditions. Rodents and occasional invaders such as stink bugs, elm leaf beetles and multicolored Asian lady beetles will also be driven indoors in search of shelter.