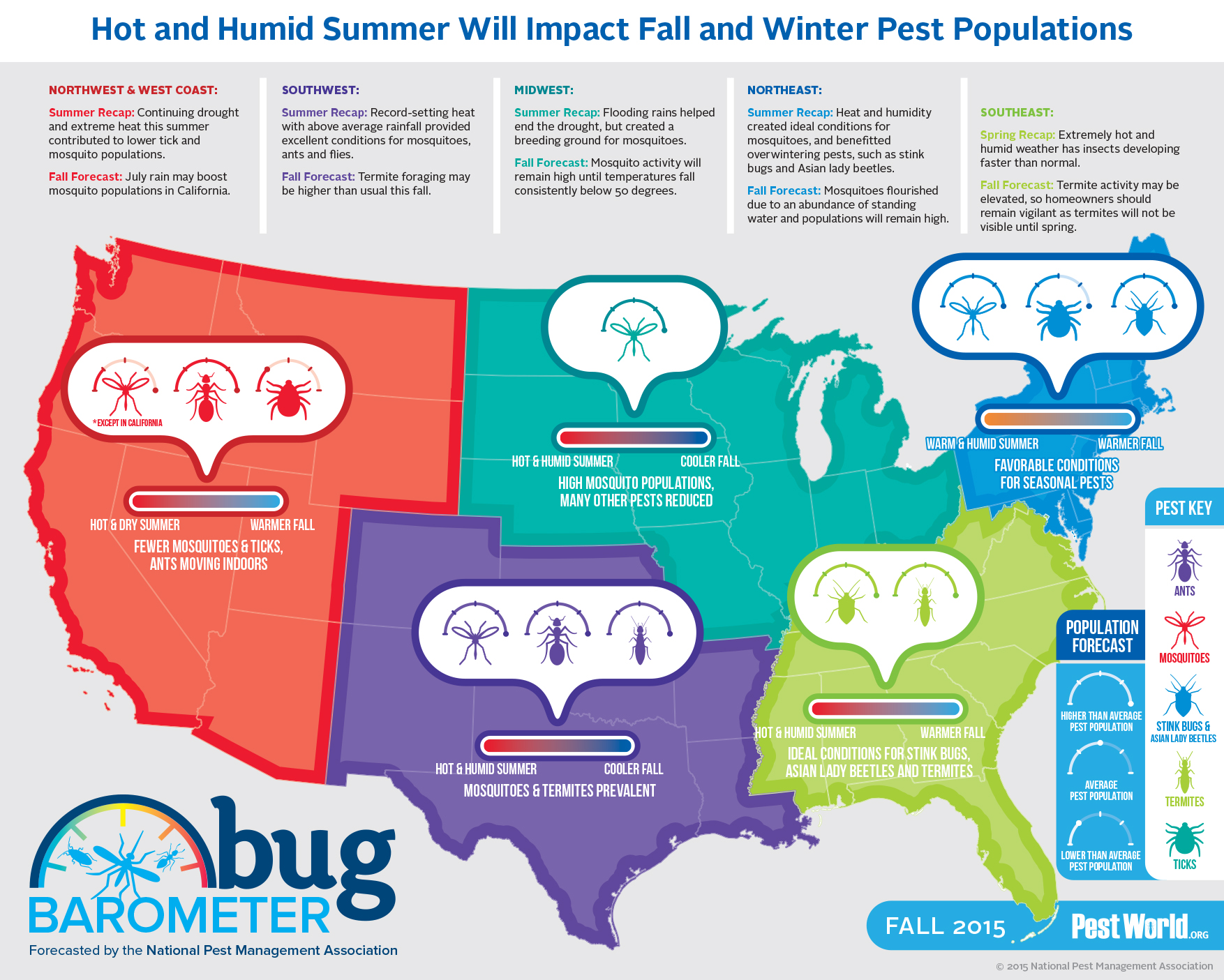 FAIRFAX, Va. (September 3, 2015) – Today, the National Pest Management Association released its Bug Barometer, a forecast indicating what Americans can expect from pest populations this fall and winter.  From the extreme heat and humidity in the Southeast to record rainfall in the Midwest, and an ongoing drought in the Pacific Northwest and on the West Coast – NPMA’s Bug Barometer takes into account the weather patterns of the summer season in every region of the country.

Spring and summer are typically the most active seasons for the majority of pests, such as ticks, mosquitoes and ants, and this year was no exception. Unfortunately, the start of fall doesn’t necessarily mean an end to pest activity, with many of these pests remaining active until temperatures consistently stay below the 50-degree mark and they begin to seek overwintering sites.

“Our entomologists analyzed spring and summer weather reports and patterns from across the country to determine the pest pressure index each region will experience as we head into the fall season,” said Cindy Mannes, vice president of public affairs for the NPMA. “Weather plays a critical role in the ability of pests, such as ticks and mosquitoes, to thrive all year long. Knowing what to expect from the pest population is critical, especially during this time of year when many of us are spending more time outdoors soaking up the last of the summer sun – and potentially exposing ourselves to health concerns such as stings, bites and even pest-borne diseases.”

The NPMA shares its fall Bug Barometer forecast for each region of the United States:

Northeast: After winter storms and frigid cold battered the Northeast earlier this year, consistent warmth made May one of the warmest on record for many cities, including Washington, D.C., Burlington, VT, and New York, NY. That was followed by periods of record-setting rainfall and exceptional humidity, which combined with the heat to provide ideal conditions for pests. Mosquitoes, especially, are expected to take advantage of an increase in areas of standing water and remain active until temperatures consistently dip below 50 degrees. The summer conditions have also helped tick populations to remain at average levels, where they will remain well into the fall season. The heat and humidity have also benefitted overwintering pests, such as brown marmorated stink bugs and multicolored Asian lady beetles that will begin to gather on exterior walls as they search for winter shelter in the coming months.

Southeast: The Southeast experienced typical summer weather – extremely hot and humid – which has allowed for insects to develop faster than normal. These summer conditions were also ideal for overwintering pests, such as kudzu bugs, multicolored Asian lady beetles and brown marmorated stink bugs, as the elevated heat and humidity encouraged growth and helped provide ample sources of food.

Termite activity may also increase in the Southeast due to an abundance of moisture, so homeowners should remain vigilant as they may be foraging throughout the winter, even though they will not be visible until swarms begin in spring.

Midwest: Record rainfall through June wreaked havoc across much of the Great Plains and Midwest, causing flash flooding in typically dry riverbeds. While the much-needed rain helped end an ongoing drought, it also resulted in an increase of standing water and an excess of mosquito breeding sites. Mosquito activity will remain high in early fall, until temperatures consistently fall below the 50 degree mark. Areas that saw the harshest flood conditions may experience a drop in pest populations, since developing insects may not have survived the extreme events.

Pacific Northwest: The ongoing drought conditions and extreme heat experienced by much of this region in the spring continued into the summer months, with July setting records for heat in Portland, OR, Seattle, WA and Spokane, WA. While heat is a favorable condition for pest populations, extreme heat without accompanying rain is less so. One benefit is that tick and mosquito populations are currently reported to be low in this region, and will likely remain down this fall.  Although the lower levels of rainfall during the summer months likely didn’t help ant colonies grow significantly, the search for moisture and shelter may drive an increase in the number of ants seeking shelter indoors as temperatures decrease and daylight shortens in the coming weeks.

West Coast: The four-year drought in California has made international headlines in recent months, but the area did experience some brief relief during the month of July, when Los Angeles, San Diego and over a dozen other cities set all-time rainfall records for the month. However, experts say the rainfall ultimately will not be enough to stave off the ongoing drought, and areas that received rain, but not enough to cause flooding, can expect pest populations to be slightly higher than in recent years. Mosquitoes are the pests most likely to have benefitted from the recent rain, and will remain active well into the fall until temperatures consistently remain below 50 degrees.

Southwest: Triple-digit heat was typical across the region for much of the summer, and Las Vegas experienced the hottest June on record. More rain than usual has freed many areas from drought conditions, especially in New Mexico, and the weather patterns have combined to provide excellent conditions for mosquitoes, ants and flies. Termite foraging and unseen damage to wood may be higher than usual, and mosquito breeding sites are likely at a surplus thanks to an abundance of moisture.