FAIRFAX, Va. (April 1, 2015) – Today, the National Pest Management Association released its Bug Barometer, a forecast indicating what Americans can expect from pest populations this spring and summer. From the high temperatures and severe drought conditions on the Pacific Coast, to the huge amounts of snow still lingering in New England – NPMA’s Bug Barometer takes into account what winter wrought in every region of the country.

Although many pests seem to disappear during the winter, most species are actually overwintering, or in a hibernating-like state, as they await the arrival of warmer temperatures and the opportunity to emerge when spring arrives. Weather patterns have a huge impact on when, and where, these pests become active once springtime hits.

“NPMA’s Bug Barometer is the result of research conducted by our expert entomologists, who analyzed winter weather reports and patterns from across the country to determine the pest pressure index each region will experience this spring,” said Missy Henriksen, vice president of public affairs for the NPMA. “The events of this past winter lay the foundation for what’s to come, but the final outcome depends on how the recent weather combines with temperatures and precipitation patterns in the upcoming weeks. Understanding what to expect in various parts of the country is important, because so many of these pests, such as ticks, mosquitoes and termites, pose serious health and property threats.” 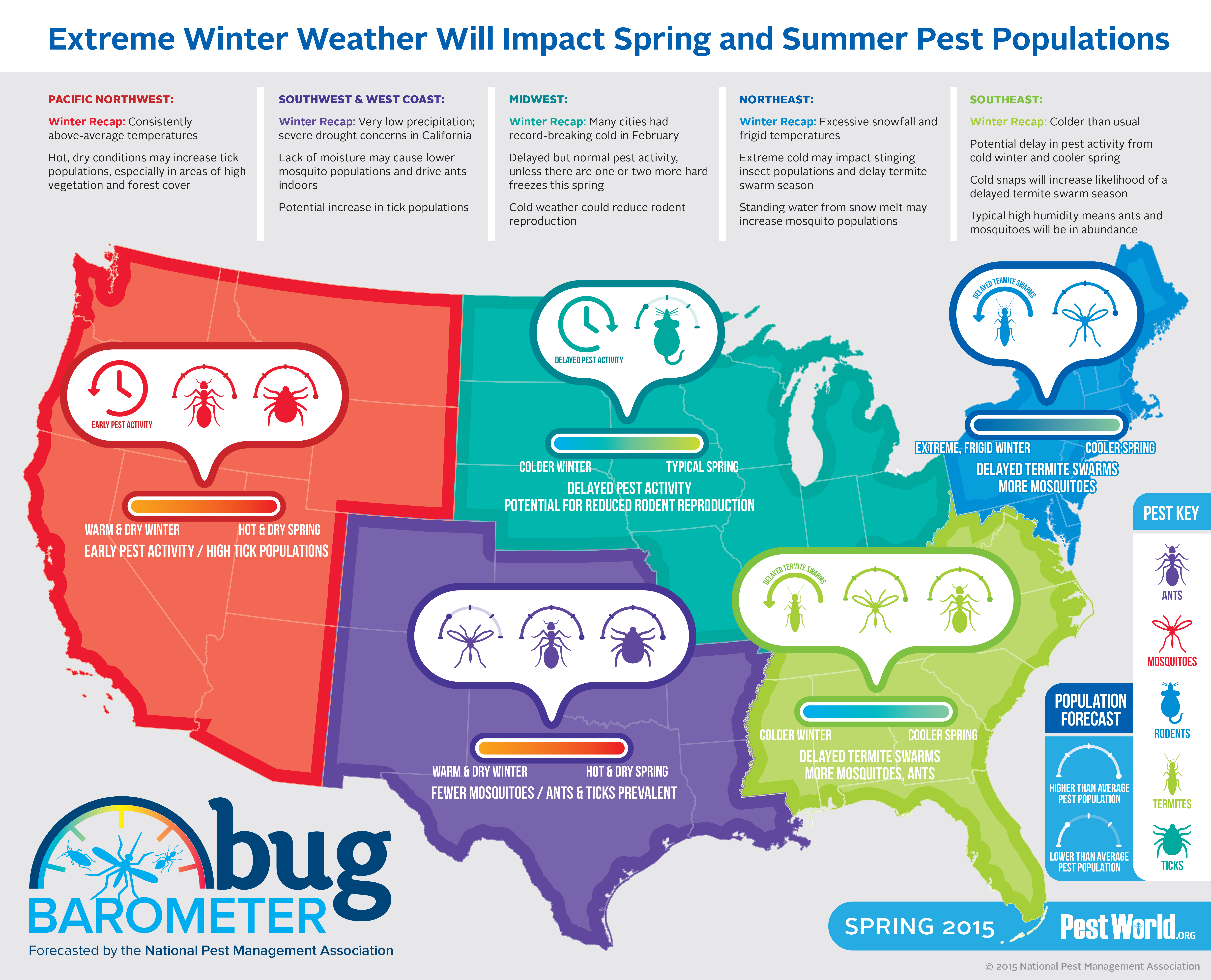 The NPMA shares its Bug Barometer forecast for each region of the United States:

Northeast: January was the coldest winter on record for some cities in the Northeast, especially in New England, which experienced excessive, heavy snowfall and frigid Arctic air for much of the winter. When it comes to stinging insects, this extreme cold may have an impact on overwintering populations of mated wasp and bee queens, and will also delay termite swarm season, as the deep ground freezing will thaw much later than usual. However, as the snow begins to melt, areas of standing water will serve as mosquito breeding grounds and good foraging conditions for termites, which could increase the populations as spring turns into summer.

Southeast: The Southeast experienced a much colder winter than usual, which means a potential delay in pest activity as temperatures struggle to rise even now that spring is upon us. While termites have swarmed in some areas in the region, those cooler temperatures will generally mean a later termite swarm season than what is typical, especially if the area sees a cold snap in the next few weeks. Once a sustained period of warmer weather sets in, along with the high humidity and likelihood of rain that is typical in the region, pests such as ants and mosquitoes will be in abundance.

Midwest: February was one of the coldest months on record for many cities in the Midwest, and residents in that area of the country can expect pest activity to begin later than usual. Although that doesn't mean pest populations in the summer will be lower, they may be reduced if periods of spring-like weather are followed by one or two hard freezes over the next few weeks. Cold weather can also mean a reduction in rodent reproduction and the natural death of rodents such as mice.

Pacific Northwest: While so much of the country was battered by brutal cold and snow, the western half of the nation has experienced consistently above-average temperatures. A long list of states in the West, including California, Idaho, Nevada, Oregon, Utah, Washington and Wyoming, experienced their top 10 warmest months this January. That warmth, accompanied by dry conditions, will likely make for a high tick population, especially in areas with unkempt vegetation and forest cover. These conditions have already contributed to reports of heavy activity from odorous house ants and carpenter ants.

Southwest and West Coast: Severe drought concerns in California have escalated over the past few months. Although winter is typically the wettest season, remarkably little precipitation fell this year. That could be good news in the form of lower populations of mosquitoes, as the lack of moisture means fewer potential breeding grounds. However, the few water sources that remain are likely to be stagnant and a significant draw for the mosquito and bird populations, posing an increased risk for the transmission of West Nile virus. If the weather remains the same, residents can expect ants to be driven indoors and will likely see an increase in tick populations.