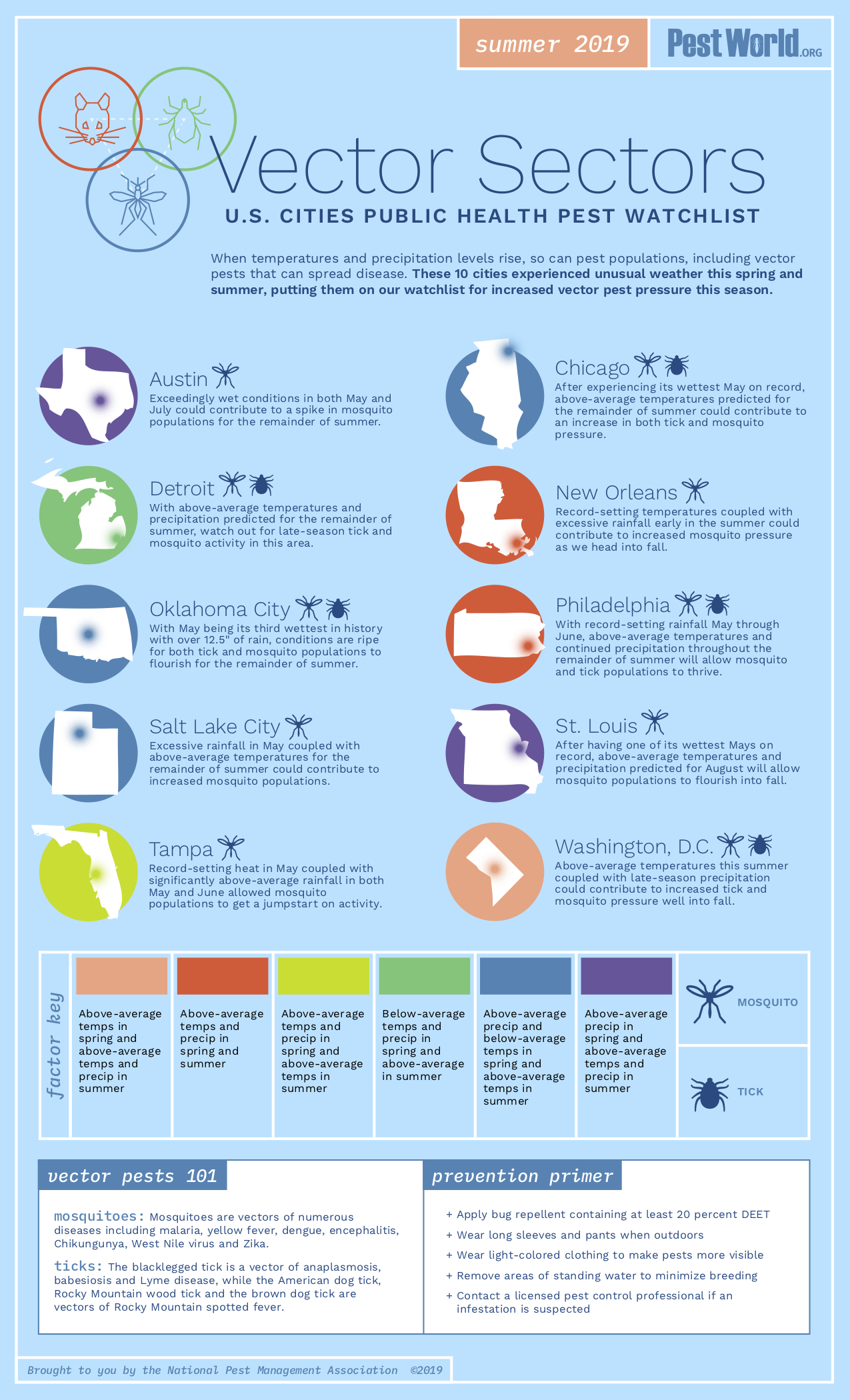 FAIRFAX, VA (August 1, 2019) — The National Pest Management Association (NPMA) today released its bi-annual Vector Sectors™ list of the top 10 U.S. cities with the greatest risk for increased pest pressure from vector pests, including ticks and mosquitoes, for the remainder of summer and into fall. As vectors of disease, these pests are able to transmit pathogens such as Lyme disease and West Nile virus to humans, respectively, making awareness and prevention vital to protecting public health.

“The deluge of rain that soaked most of our country throughout spring and summer did more than just damper outdoor plans, it gave rise to dangerous pest populations that could impact the country well into fall,” said Cindy Mannes, vice president of public affairs for NPMA. “Early season rain allowed pockets of moisture to accumulate, creating ideal breeding conditions for both ticks and mosquitoes alike. Coupled with late-season heat expected across most of the country for the remainder of summer, conditions are ripe for these pest populations to multiply, and quickly.”

Vector-borne illnesses are on the rise, and ticks and mosquitoes are among the biggest culprits. “The CDC reported 59,349 cases of tick-borne diseases alone in 2017, a staggering increase of over 22 percent from just the year prior,” said Mannes. “While Americans across the country should always remain vigilant in their pest-proofing efforts, especially during the summer months, those living in the cities identified should take extra precautions when spending time outdoors this season.”

Austin: Exceedingly wet conditions in both May and July could contribute to a spike in mosquito populations for the remainder of summer.

Chicago: After experiencing its wettest May on record, above-average temperatures predicted for the remainder of summer could contribute to an increase in both tick and mosquito pressure.

Detroit: With above-average temperatures and precipitation predicted for the remainder of summer, watch out for late-season tick and mosquito activity in this area.

New Orleans: Record-setting temperatures coupled with excessive rainfall early in the summer could contribute to increased mosquito pressure as we head into fall.

Oklahoma City: With May being its third wettest in history with over 12.5” of rain, conditions are ripe for both tick and mosquito populations to flourish for the remainder of summer.

Philadelphia: With record-setting rainfall May through June, above-average temperatures and continued precipitation throughout the remainder of summer will allow mosquito and tick populations to thrive.

Salt Lake City: Excessive rainfall in May coupled with above-average temperatures for the remainder of summer could contribute to increased mosquito populations.

St. Louis: After having one of its wettest Mays on record, above-average temperatures and precipitation predicted for August will allow mosquito populations to flourish into fall.

Tampa: Record-setting heat in May coupled with significantly above-average rainfall in both May and June allowed mosquito populations to get a jumpstart on activity.

To protect against biting ticks and mosquitoes and the threats they pose, be sure to apply bug repellent containing at least 20 percent DEET before spending time outdoors. When possible, wear long pants, long-sleeved shirts and closed-toe shoes, and opt for light-colored clothing to make any hitchhiking pests more visible. Empty any areas of standing water on your property, as these serve as breeding grounds for pests, and be sure to contact a licensed pest control professional if an infestation is suspected to help properly identify and treat the problem.

For more information on NPMA’s Vector Sectors or to learn more about protecting against common household pests, visit PestWorld.org.