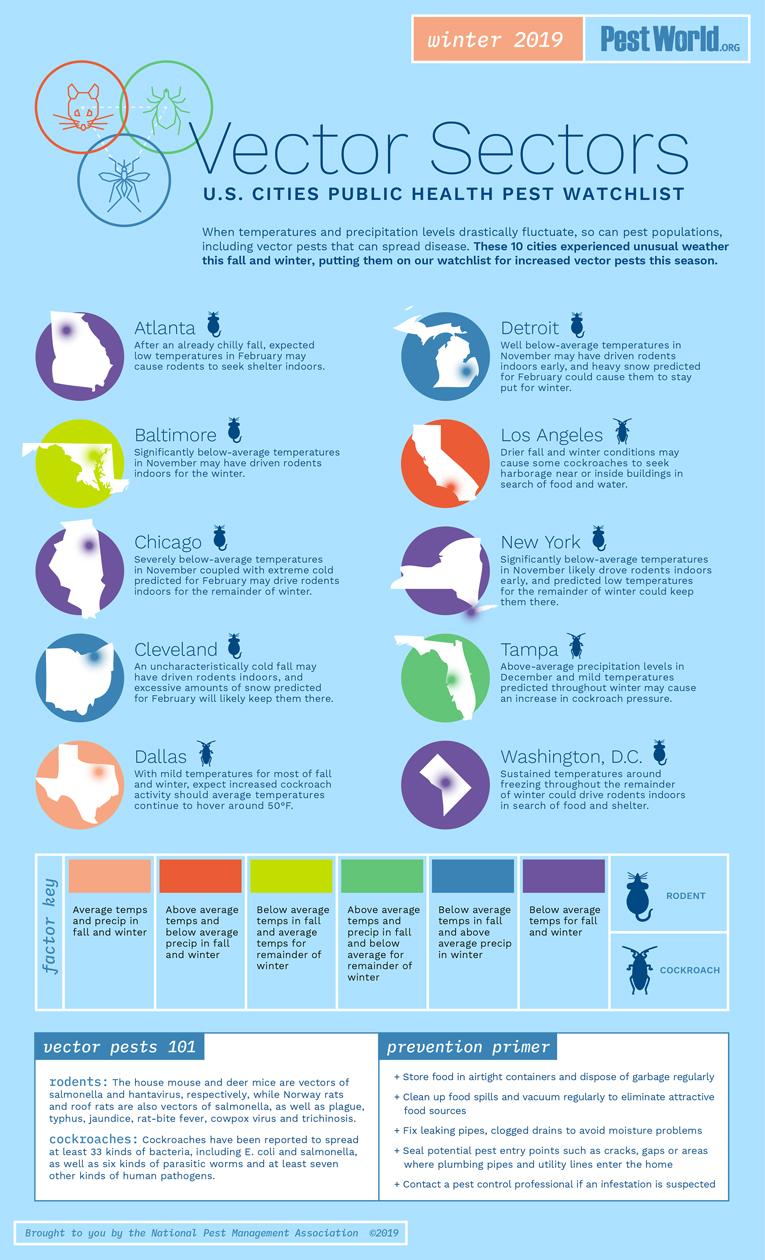 FAIRFAX, VA (February 12, 2019) — The National Pest Management Association (NPMA) today released its bi-annual Vector Sectors™ list of the top 10 U.S. cities with the greatest risk for increased pest pressure from vector pests, including rodents and cockroaches, for the remainder of winter. As vectors of disease, these pests are able to transmit pathogens such as Salmonella and hantavirus to humans. They are also known to trigger allergy and asthma symptoms, especially in children, making awareness and prevention vital to protecting public health.

“People shouldn’t let their guard down against household pests just because it’s winter. Frigid temps, mild seasons and moisture all contribute to the pest pressure we experience in some way,” said Cindy Mannes, vice president of public affairs for NPMA. “Extreme cold during the winter months can drive rodents indoors in search of food and shelter, and excessive moisture or milder temperatures in warmer states this time of year can also cause an increase in cockroach pressure.”

Pests inside the home are much more than just an annoyance. “Many pests can have a negative impact on our health. From respiratory issues to food contamination, common winter pests such as mice, rats and cockroaches carry and transmit all kinds of bacteria and they leave behind hair and shed skin all over the house,” said Mannes. “It’s critical to get them controlled and out of the house for a healthier home environment.”

Atlanta: After an already chilly fall, expected low temperatures in February may cause rodents to seek shelter indoors.

Baltimore: Significantly below-average temperatures in November may have driven rodents indoors for the winter.

Chicago: Severely below-average temperatures in November coupled with extreme cold predicted for February may drive rodents indoors for the remainder of winter.

Cleveland: An uncharacteristically cold fall may have driven rodents indoors, and excessive amounts of snow predicted for February will likely keep them there.

Dallas: With mild temperatures for most of fall and winter, expect increased cockroach activity should average temperatures continue to hover around 50°F.

Detroit: Well below-average temperatures in November may have driven rodents indoors early, and heavy snow predicted for February could cause them to stay put for winter.

Los Angeles: Drier fall and winter conditions may cause some cockroaches to seek harborage near or inside buildings in search of food and water.

New York: Significantly below-average temperatures in November likely drove rodents indoors early and predicted low temperatures for the remainder of winter could keep them there.

Tampa: Above-average precipitation levels in December and mild temperatures predicted throughout winter may cause an increase in cockroach pressure.

Washington, D.C.: Sustained temperatures around freezing throughout the remainder of winter could drive rodents indoors in search of food and shelter.

Regardless of where you live, all U.S. residents should take extra precautions this winter to protect against vector pests. Be sure to store food in airtight containers and dispose of garbage regularly. Clean up any crumbs on floors and counters, and vacuum or mop floors to eliminate attractive food sources. Fix leaking pipes and clogged drains, as standing water can attract pests, and be sure to seal potential entry points such as cracks, gaps or areas where plumbing pipes and utility lines enter the home. If an infestation is suspected, contact a licensed pest control professional to properly identify the problem and determine the best treatment method.

For more information on NPMA’s Vector Sectors this winter, or to learn more about protecting against common household pests, visit PestWorld.org.