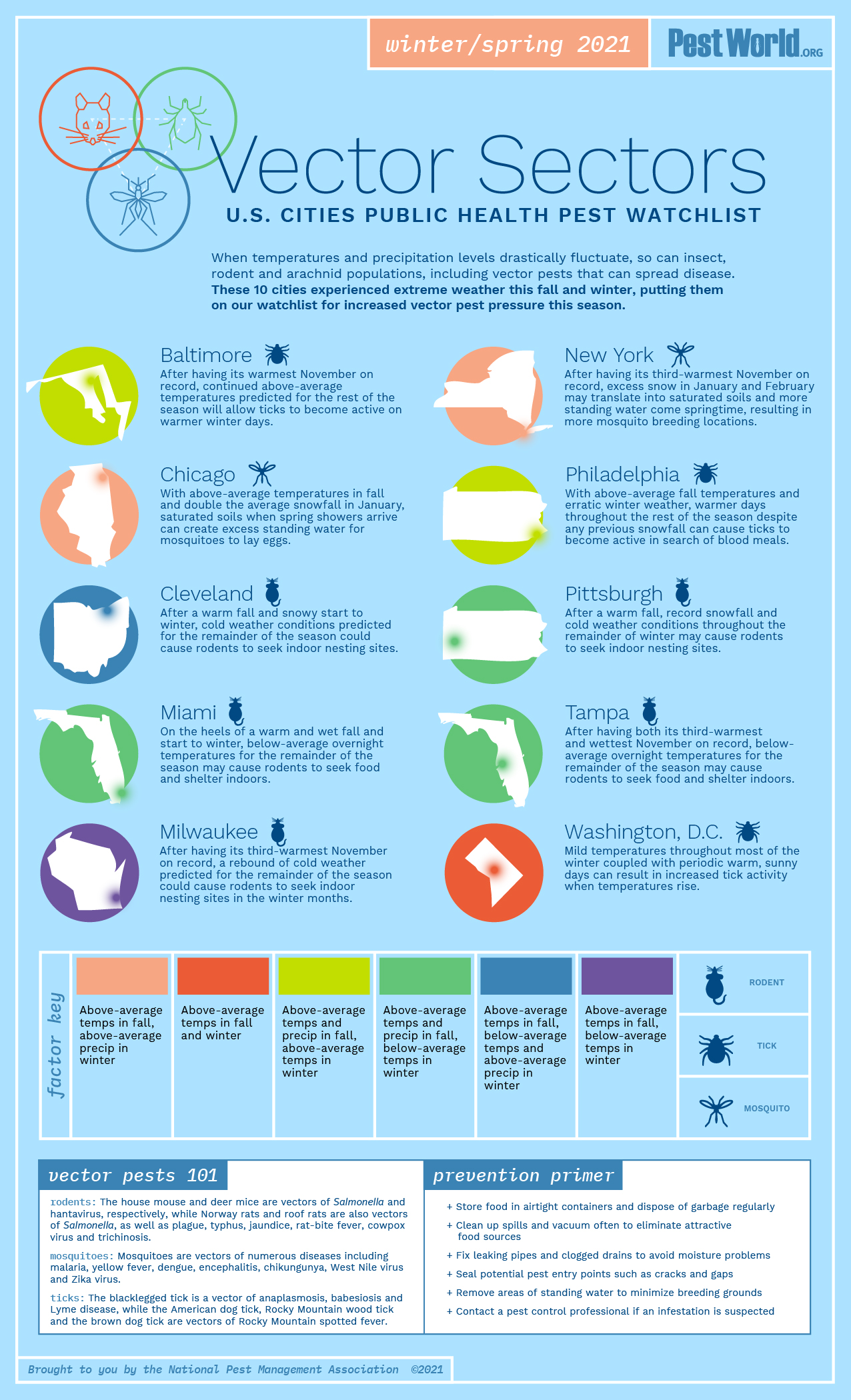 FAIRFAX, VA (February 24, 2021) — The National Pest Management Association (NPMA) today released its bi-annual Vector Sectors™ list of the top 10 U.S. cities with the greatest risk for increased pest pressure from vector pests for the remainder of winter and into spring. Despite heavy snowfall and below-average temperatures across much of the U.S., experts caution pests like ticks and rodents still pose a serious threat to public health.

“It’s a common misconception that pests disappear as soon as winter rolls around,” said Jim Fredericks, Ph.D., chief entomologist for the NPMA. “Pests like ticks and mosquitoes have learned to adapt to excess snow and subzero temperatures and are able to survive some pretty harsh conditions, only to emerge in springtime en masse as if nothing happened. Those that are less resilient, such as mice and rats, have found their own ways to survive the winter, invading an estimated 21 million U.S. homes each year until warmer temperatures set in.”

Rats are the number one health and home pest concern amongst Americans, closely followed by mice.* In January 2021, Twitter engagement around the topic of finding rodents in the basement and kitchen increased a staggering 76% and 41%, respectively. From food contamination to respiratory issues and disease transmission, rodents pose a significant threat to public health and property and require a professional to eradicate from the home.

Ticks, while not readily in the home, still pose a significant health risk even during the winter months. No matter how cold it gets or how much snow accumulates, these pests only need temperatures to hit 50 degrees, even for just one day, for them to become active. “If you decide to go for a walk in the woods as soon as temperatures thaw, be sure to remain vigilant in your pest protection efforts to stay safe from tickborne illnesses such as Lyme disease,” said Fredericks.

Baltimore: After having its warmest November on record, continued above-average temperatures predicted for the rest of the season will allow ticks to become active on warmer winter days.

Chicago: With above-average temperatures in fall and double the average snowfall in January, saturated soils when spring showers arrive can create excess standing water for mosquitoes to lay eggs.

Cleveland: After a warm fall and snowy start to winter, cold weather conditions predicted for the remainder of the season could cause rodents to seek indoor nesting sites.

Miami: On the heels of a warm and wet fall and start to winter, below-average overnight temperatures for the remainder of the season may cause rodents to seek food and shelter indoors.

Milwaukee: After having its third-warmest November on record, a rebound of cold weather predicted for the remainder of the season could cause rodents to seek indoor nesting sites in the winter months.

New York: After having its third-warmest November on record, excess snow in January and February may translate into saturated soils and more standing water come springtime, resulting in more mosquito breeding locations.

Philadelphia: With above-average fall temperatures and erratic winter weather, warmer days throughout the rest of the season despite any previous snowfall can cause ticks to become active in search of blood meals.

Pittsburgh: After a warm fall, record snowfall and cold weather conditions throughout the remainder of winter may cause rodents to seek indoor nesting sites.

Tampa: After having both its third-warmest and wettest November on record, below-average overnight temperatures for the remainder of the season may cause rodents to seek food and shelter indoors.

Washington, DC: Mild temperatures throughout most of the winter coupled with periodic warm, sunny days can result in increased tick activity when temperatures rise.

To limit encounters with pests, the NPMA recommends removing sources of standing water in and around the home. This includes fixing leaky pipes and clogged drains and sealing entry points such as cracks or gaps where plumbing pipes and utility lines enter the structure. Be sure to clear all gutters and downspouts of debris as water accumulation provides ideal conditions for pests to breed.

When spending time outdoors, be sure to wear long pants and sleeves when possible, along with bug repellent containing at least 20 percent DEET. Refrain from wearing fragrant perfumes and opt for light-colored clothing to make spotting ticks easier. Before heading indoors, thoroughly check clothing, skin and pets for ticks and promptly remove to limit exposure to tickborne disease.

Once inside, be sure to store food in airtight containers to prevent pests like rodents from gaining entry and dispose of garbage regularly. Clean up crumbs and spills and vacuum often to eliminate attractive food sources. If pests become a problem, be sure to contact a licensed pest control professional to help properly identify and treat infestations.

*January 2021 online engagement findings are a result of a recent online research study conducted between January 2018 and January 2021 by Advanced Symbolics Inc. using a representative sample of 274,500 Americans.

About the National Pest Management Association
The NPMA, a non-profit organization with more than 5,500 members, was established in 1933 to support the pest management industry's commitment to the protection of public health, food and property from the diseases and dangers of pests. For more information, visit PestWorld.org or follow @PestWorld on Facebook, Twitter, Pinterest and YouTube.

How To Prevent Stink Bugs

Stink bugs are an invasive species that release a smelly odor when crushed. Find out how to keep them out of your home this fall.